Best Elise Skin in League of Legends [All 6 Ranked]

The Spider Queen – Elise, was originally an elegant lady from a very powerful house. Still, after a few unfortunate events, Elise has been turned into a spider-like creature by the work of a mysterious demigod. Now, Elise preys on her feast in the shadows, seducing her victims into her webs to catch them off guard for the sake of maintaining her form.

Inside the game of League of Legends, Elise is a mage assassin with the capability of transforming into two forms, Human and Spider. She also plays the role of a Jungler, where she must flank the enemy laners to give an advantage to her team.

Riot has made 6 Elise skins since her release: 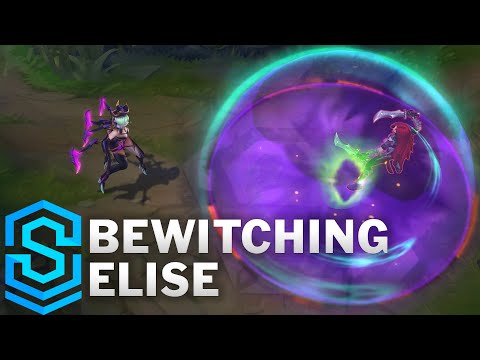 Celebrating the Halloween event, Bewitching Elise is a legacy skin that completely changes her appearance. Cute short silver hair, a short dress with colors of black, white, and purple, a black witch hat, and four purple spider legs on her back. Elise basic attacks shoot a purple-magical shot.

Her Q fires a poisonous shot; a face of a yellow ghost can be seen inside of it. Elise’s W summons a spiderling made out of pumpkin only to explode a few seconds later, leaving a large green eye. Her E shoots a green, if it hits the target, they will be stunned, and the thick green web will surround them.

In her spider form, Elise turns into a giant purple spider having only one big green eye at its head and its back body alongside a silly witch hat. Her Q lunges at a target, creating green particles from the impact. Elise’s E pulls her away from the ground using her web leaving her signature at the spot she ascended from. 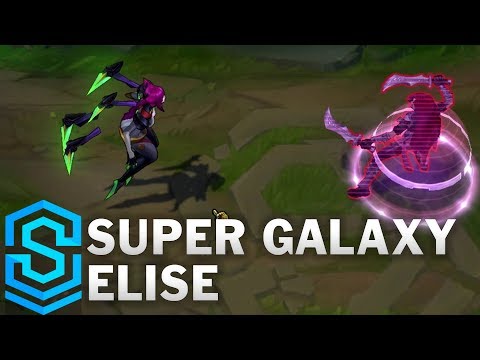 Elise has metamorphic powers that allow her to turn into a giant spider. Super Galaxy Elise has dark purple hair that goes up to the side of her head like two horns. Her body is covered with a silver super-suit, and her metal spider legs shine green.

Elise shoots purple laster from her hands; her Q fires two laser beams colored in red at a target. Her W summons a tiny green spider that detonates after a few seconds, leaving an explosion similar to a star’s. She shoots a mechanical web that stuns the target; a pink-digital web is created around them.

Elise transforms into a giant robotic spider, colored in black and purple but with green sides. Her Q makes her jump at a target, biting them and leaving a green digital effect. Her W surrounds her with a green aura, making her attack faster. Her E pulls her away from the ground, and a spider queen sigil is left in the center of a radius. 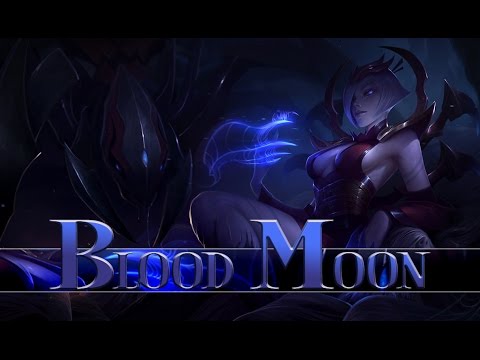 Elise is empowered by the red moon’s powers. Detecting herself for that, she is dressed as a kunoichi. She has short silver hair covering the majority of her left eye, a red mask on top of her head, and golden spider legs on her back.

Her Q fires a toxin of beautiful red and blue colors. Elise summons a white spider with marks similar to a blood moon mask, exploding after hitting a target, leaving red and blue wind particles. Her E fires a pink cocoon that surrounds the enemy with its magical power.

Elise transforms into a giant red spider; its huge back body has marks that illustrate the mask she had on her head. Her Q  pounces at the target, leaving the same particle effects as her human form. Her W generates a purple aura around her body; her E carries her into the air, leaving a mask mark on the spot she activates her ability from. 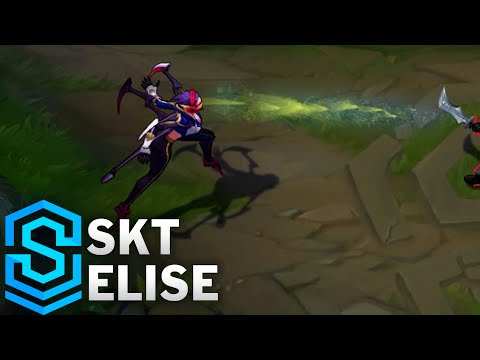 Celebrating the win of SKT in the 2015 World Championship, Elise is one of the signature champions picked from professional players. Elise is wearing a white top crop and black skin-tight pants. She has black hair styled up in a short spiky way.

SKT red headphones can also be seen on her head. Starting with her Q, she fires a green toxin at a target, making it obvious that it is poisonous. Her W summons a black and golden spider that explodes a few seconds later, creating a large poisonous explosion with its blue blood. Her E throws a yellow cocoon that completely wraps around the target.

In her spider form, Elise turns into a robotic-looking spider with an SKT sigil. Elise’s W summons black orbs that wrap around her body, and her E, which is most iconic, ascends her to the air with her web, leaving the “T1” title on the ground. Her recall animation is also worth mentioning, as it imitates the atmosphere in LoL Esport. 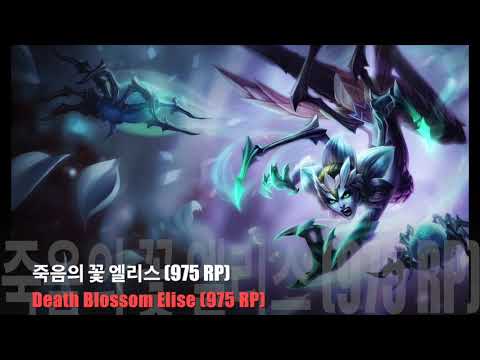 Perhaps the reason this skin doesn’t top SKT is purely for the huge fanbase SKT has. Elise is a beautiful death blossom, covered in flower shapes yet to bloom. Her overall aesthetic is white and cyan. Elise’s basic attack fires flower-like projectiles that leave a trail of petals.

Her Q shoots a white and cyan toxin that almost looks like a laser beam. Her W sends little white spiderlings that explode, creating an effect similar to Elise’s body color. Her E shoots a cocoon that stuns enemies, a spider web colored in blue.

Every time Elise transforms, she blooms, generating a wave of petals around her, slowly dropping on the ground. She becomes a giant spider with a back similar to a flower. Her E sends her to the air, leaving petals behind, and the mark on the ground is a white flower. 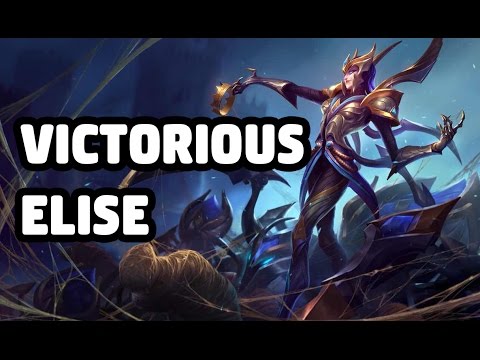 Dressed like a spider queen, covered in golden armor, Victorious Elise is a skin that can never be obtained at this stage of the game. It can only be awarded to players who ranked gold or higher in 2013. Although it is an infrequent skin, it’s unfortunately at the bottom of the list for bad qualities.

The character model overall is ugly compared to all other victorious skins. The only ability representing gold, which is the victorious skin signature effect, is her E. She shoots a golden cocoon that expands and wraps around her enemies, trapping them in the golden web.

Her Q is a blue toxin that does leave small blue particles upon impact. Her W summons a blue spider that explodes, creating a huge impact of blue blood. Her spider form is a giant spider, covered in golden armor over its blue skin. Her effects generate blue particles and a magical blue smoke produced after transforming.