If you are into Kayle, and she’s been your main player for years, then these are some of the best skins you should consider for the best gaming experience.

Previously, Kayle was ridiculed for her slow-paced and redundant attacks. It was true that she was nothing years ago, but now with the advent of new embellishments over her character, she is becoming a beast that can eradicate many enemies at once. Not to mention, her gameplay style has received a withstanding boost with the arrival of new skins that changed the schematics of her design and brought in wonderful background music, visuals, and effects.

Well, your presence here means you want to look at the best Kayle skin, so I won’t keep you here for so long. Without any further ado, let’s dive right into the enumeration of the top Kayle skins that you can get for a wonderful gaming experience. 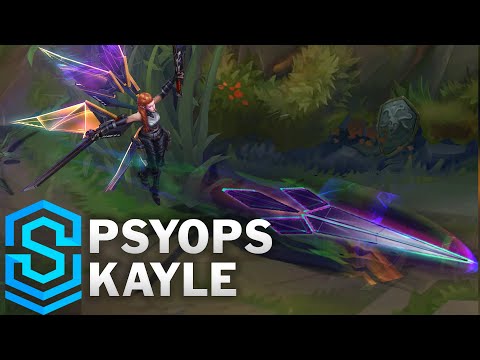 The PsyOps Kayle indeed is one of the expensive skins out there, but at the same time is also one of the top-notch skins existing in the available arsenal of Kayle skins. What makes the skin stand out is its neon-lit wings hunched over Kayle’s back.

They glisten in sheer sunlight, which makes the skin unparalleled and breathtaking. To top things off, PsyOps Kayle looks out of this world when her skin is deliberately paired up with her classical mask. Anyhow, the effects and visuals are on the spot, and it makes the overall looks of the Kayle skyrocket. 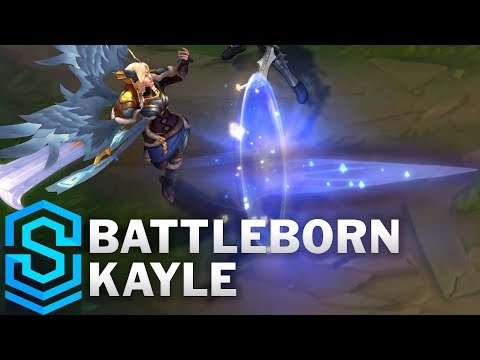 Battleborn Kayle is more battle-Esque skin, focusing more on sword detailing and Norse-style armor. This skin is perfect for those who are looking forward to relishing For Honor or Skyrim moments in a nuanced manner. For what it’s worth, Battleborn Kayle also brings in mesmerizing and bedazzling wings texture that makes the whole notion of angelic Kayle something out of this world.

Moreover, the effects and visuals are paramount when Kayle is fighting off her nemesis on the battleground. Not to mention, the price point for this skin is also somewhat decent, making it accessible to a large cohort. 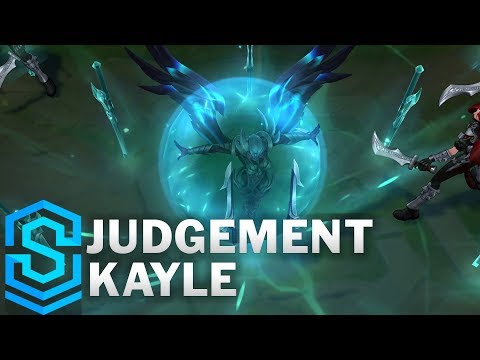 Judgement Kayle lies at a darker side of judgement, making her look as if a paladin of the dark forces. Anyhow, the skin is exotic and rare and can only be redeemed during season 1. If you have lost the opportunity to get the skin, I recommend you look out for accounts selling the Judgement Kayle as an exclusive skin.

Apart from this, the skin is aesthetically pleasing, with lush ebony color. Furthermore, her attire is covered with spikes with wonderfully hanging raven wings. Last but not least, the visuals, effects and sounds are just exhilarating. You won’t be disappointed even for a second. 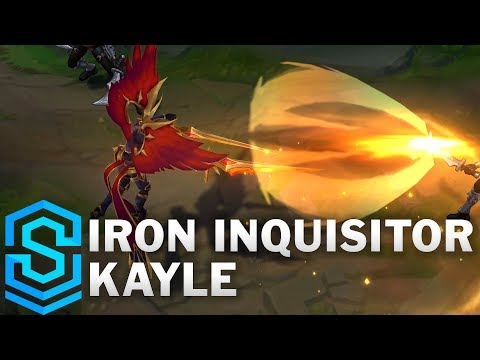 Although there are no new particles or animations, Iron Inquisitor Kayle is something of a spectacle nonetheless. For example, the new textures and model makes the skin stand out in the pool of competitors. On top of that, the dark raven wings coupled with an enchanting mask makes the skin eye-catching and worth a while.

To say the least, the Inquisitor Kayle looks as if she’s a God controlling the dead, AKA God of Death. It’s worth mentioning that her wings change color based on the current level. So, in short, it’s a wonderful skin at such a budget price point. 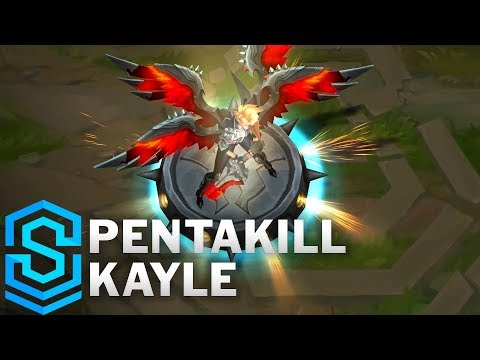 If you have a thing for singing, for music in general, then coupling up your favorite thing in a blood-thirsty battle can be invigorating. And this is exactly what the makers have done with the Pentakill Kayle. They have embedded gothic music ambitions within Kayle that threaten the enemies with her new animations and resounding textures.

For what it’s worth, her cascading yellow hair and mesmerizing particles effect while slashing the enemies is a feast to eyes. Last but not least, her wings color transitions from yellow to red when the enemies encapsulate her. 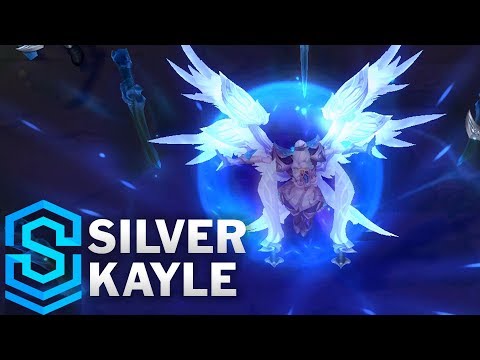 The skin features Kayle as an angelic hero, darned with blazingly silver armor ready to pulverize the walking monstrosities. Although the skin is flashy and gives cool vibes at the end of the day, it just looks akin to the classic Kayle when the helmet is put off.

The same type of wings, the same type of hair, and nearly the same particle effect. However, this doesn’t mean that you should start avoiding the skin. It really is a special piece if you are into having exclusive guardians with a dedicated available arsenal. 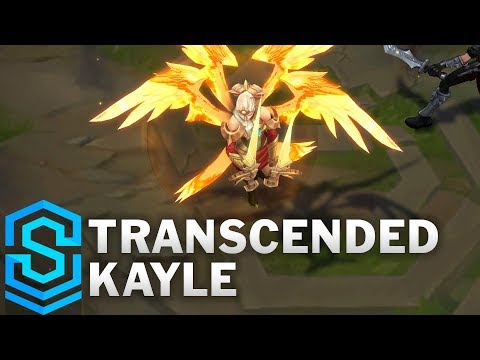 Truth to be told, Transcended Kayle is truly a breathtaking skin with all those new animations and particles popping out. Imagine having those kinds of winds while you embark on a journey to behead your enemies. It just makes the whole notion of killing so pious and serene.

I don’t want to sound like a lunatic, but the makers have done justice to the transcended Kayle at that price point. Apart from this, when Kayle puts off her helmet, she looks extremely beautiful and spellbinding. Overall, the skin is smooth and truly wonderful. 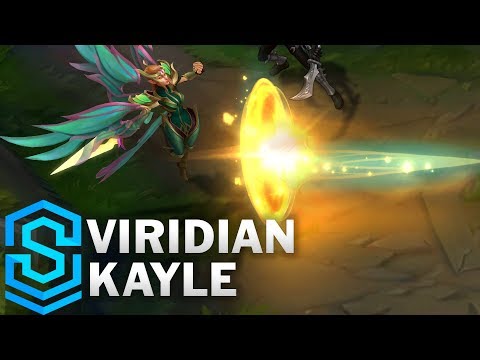 Although Viridian Kayle was released eons ago, it still is one of the best skins known to the fanbase. It’s true that Viridian Kayle is optimistically simple yet brings in resounding particle effects and animations. Kayle is encapsulated with polished green and gold armor, with elfish ears protruding out of her face, making her look like an elder elven.

Not to mention, her sword has a dedicated design that palpitates when magnificently around enemies. All in all, Viridian Kayle will not disappoint you even for a second. 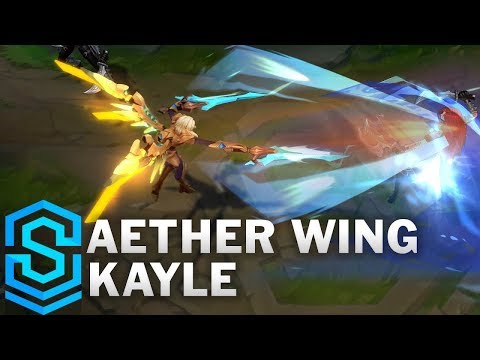 Aether Wing Kayle is an astonishing skin that has a myriad of new particle effects for her abilities and movement. Not to mention, even her animations and sound effects were revamped to a better version, making her stand out among all the top skins—no wonder why it’s one of the expensive skins out there.

For enumeration, the wing design is a real stage snatcher because the textures are mesmerizing and go in parallel with the agenda of the Aether wing. It’s worth mentioning that the transformations in accordance with the animations truly showcases the true potential of Kayle as an angel. Last but not least, the blue color particle effect and the sound just gets the whole show. 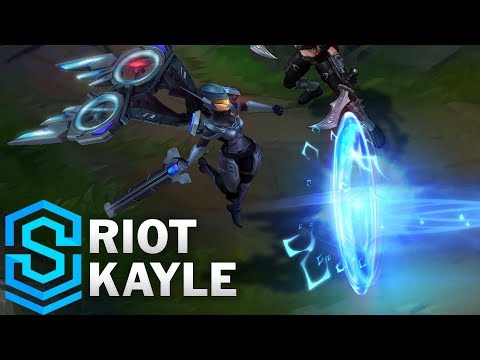 The agenda of the Riot Kayle was to project another A. I based, and futuristic entity, but the skin feels lacking at so many places. In my opinion, Riot Kayle could have done better. Nonetheless, the skin comes at a cheap price point, and there’s no justification for not buying it.

Anyways, the particle effects, theme, and sound effects are somewhat decent. It’s worth adding that the makers added a new recall animation as well, which makes Riot Kayle look sexy. That’s the only best thing about the skin.

Best Vayne Skins in League of Legends in 2023 (All Ranked)
How to Make Paths in Animal Crossing: New Horizons (Step Guide)
How To Make a Lever In Minecraft [2023 Tutorial]
15 Best Sandbox Games Like Minecraft (2023)
10 Best Steam Alternatives for PC Gamer Needs
A Look Into the Past: 8 Best Video Games From the 80s
How to Use Steam Points (Earn & Purchase)
8 Xbox Gamertag Checker: Search Xbox Live Profiles