Ranking All the Best Blitzcrank Skins in LOL

The Great Steam Golem – Blitzcrank, is a huge robot created by a scientist called Viktor, in the nation of Zaun. Blitzcrank adapted and became self-aware. He started interacting with the residents and learned more about his surroundings, becoming almost like a living being. Blitzcrank eventually sought out to help people and improve his own body for the sake of others.

Blitzcrank is a champion in League of Legends that is commonly picked in the Support role. Although some players like to build him as a mage, he works better being a tank. Blitzcrank has plenty of Crowd Control in his abilities. His primary ability is his hook which pulls champions out of their position. This alone can always guarantee a kill for a good team.

Riot has released 13 skins for Blitzcrank since release; here is the list of his best skins: 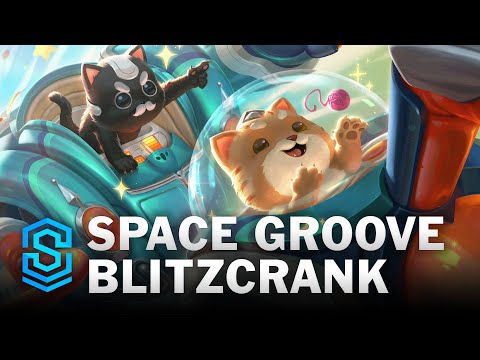 Out of all Blitzcrank skins, Space Groove is the best one out there. Blitzcrank is a space suit controlled by super-intelligent cats. His appearance looks vibrant and exceptionally well made.

Starting with his abilities, his Mana Barrier is a transparent orbit shield. During his basic attacks, the cat controlling the arm occasionally scratched the target with its little hands. His Q launches his rubbery arm towards an enemy, and a cue sound of a cat meowing will be heard.

His W makes Blitzcrank shine a yellow aura as the music starts to play for a short duration. Activating E causes orbits to appear around his fists; Blitz spins his left arm before punching his target. His ultimate lighting strike is replaced with a laser beam, and his R is an energy explosion. Recalling animation ejects all cats for a dance! 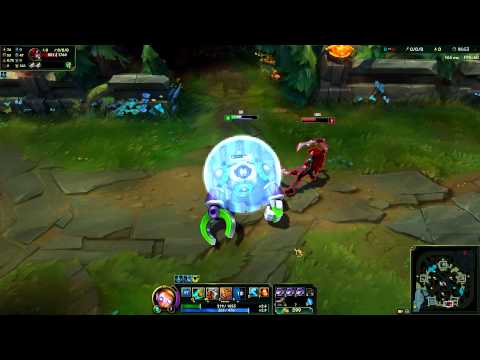 Blitzcrank is an evil boss from an arcade game. His head is a giant brain with evil green eyes glaring from it. His mechanical body is made out of silver steel with purple and green parts. He has a big grappling hook and a rotating silver ball to move.

Most of Blitzcrank’s effects create arcade sounds. His Q activates his rocket grab, launching his spring to pull an enemy caught between his claws. His W activates his rocket launcher behind his back, causing ominous music to play while flaming particles push him forward.

His E creates a magnetic wave around his arms, causing the next target to be knocked up in the air. His ultimate surround Blitzcrank with a purple field. The target he punches is hit by a bolt of purple lightning. His R detonates his purple static field. 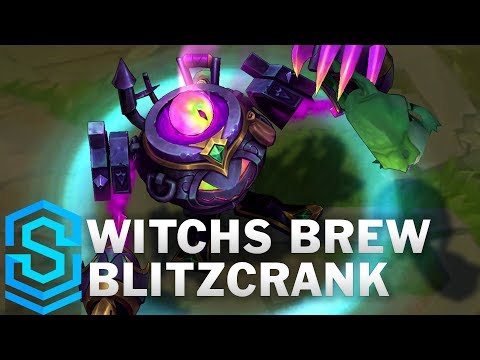 Blitzcrank is a literal witch brew. His entire body is a big black pot filled with dark purple liquid with a floating evil eye on its surface. One of his hands has purple claws, and the other one has a sharp grappling hook.

His passive is a light-purple shield that surrounds his body. His basic attacks have new sound effects of metal punched, except Blitzcrank is the one punching. His Q sends out his grappling hook that is attached with a black rope.

Whenever an enemy is caught, you can hear a screech. His W makes him run, causing the liquid inside his body to spill out. E will curse his arms with dark energy. Whenever his ultimate is ready, ghosts will start to swarm around his body. Pressing R will cause a big explosion, splashing his purple liquid to his surroundings. 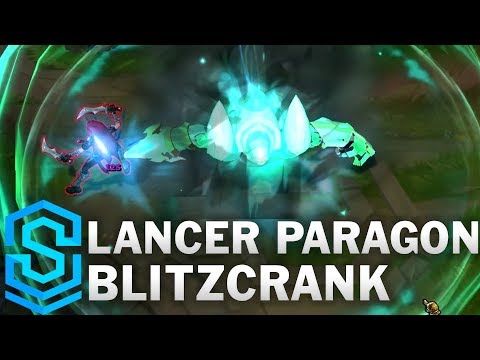 Both of these skins are a variety of each other. They both have the same animation and same sound effects. Particle colors are the only difference. Unlike prestige skins, there is no way to tell which one is better; it all depends on personal preference.

Starting with Lancer Rogue Blitzcrank, his iron body is shaped like a knight. His head looks like a helmet, and his arm is a sharp lance. In this variant, Blitzcrank is presented as a dark knight, with his whole body being black and golden.

His passive is an electrical golden Mana Barrier. His Q launches his sharp lance connected to his body with black steel chains, empowered by flaming fuel. His W burns his fuel and processes energy from the pipes on his back, causing him to float and his lance to spin like a drill. His E generates red sparks around his arms. His ultimate erupts a red static field in an area of effect.

Lancer Paragon Blitzcrank, on the other hand, is presented as a good knight. His iron body is more neatly shaped. In this variant, his whole body is white and green. His passive is an electrical green Mana Barrier. His Q launches his sharp lance connected to his body with golden steel chains filled with cyan energy.

His W produces cyan energy from the pipes on his back, causing him to float and his lance to spin like a drill. His E generates green sparks around his arms. His ultimate erupts a green and cyan static field in an area of effect. 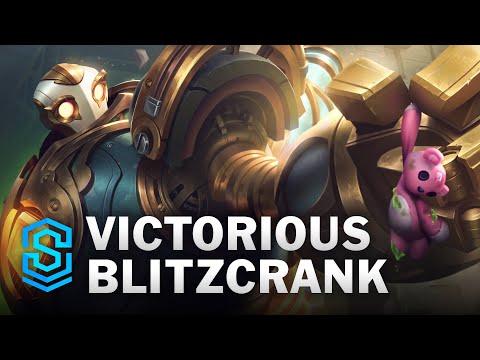 If Blitzcrank were made in Piltover, then he would probably look as he does in this skin. His design is much neater, and his body is golden mixed with a few dark-colored pieces. His back has two large pipes filled with liquid and a crystal inside.

His Mana Barrier is a passive that generates a golden crystalized shield to protect his solid body. His Q detaches his right arm, which is a significant magnetic hand, by launching it towards an enemy, then attaching it back using his magnetic powers.

If an enemy is hit, then a yellow string of lighting can be seen coming from his body to his hand. His W generates speed through the two large pipes on his back, creating a trail of energy behind. His E generates a cyan electrical field around his hands. His R explodes his stored core energy in colors matching his aesthetics. 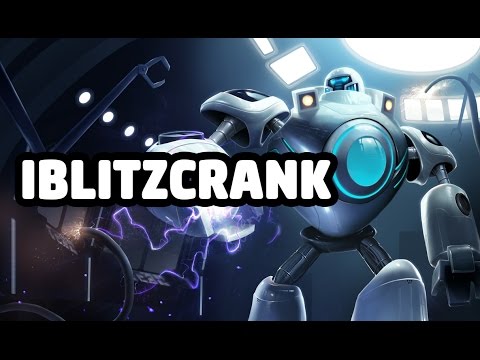 Futuristic Blitzcrank. His design is very similar to those from the game “Portal.” His body consists of large steel pieces and two big hands. In the center is a large blue core that channels energy through his body. And his face is a small black monitor with eyes on it.

His Q shoots his grappling arm in a direction, leaving a blue trail behind with small negative signs. If an enemy is hit by it, he will be instantly grabbed, leaving positive red signs behind. His W levitates Blitzcrank off the ground and generates blue energy to lift him.

His E empowers his fists and causes electrical flickers around them. His Ultimate channels blue lighting from the sky to strike an enemy, pressing his R erupts his core in a large area, damaging enemies around them by his blue static field. 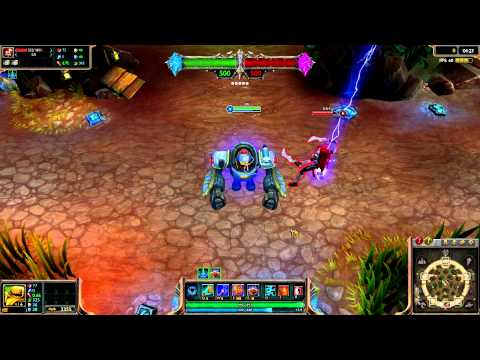 He was arriving at the cheap side of his skins. Riot Blitzcrank has him dressed as a police officer. His body is covered with heavy enforcer armor. His shoulders and his head have blue and red lights on them, just like those of police cars. There is also a speaker on his shoulder. Although his appearance is blue-themed, we can see his yellow face under his helmet.

Blitzcrank launches his black gauntlet with spring then pulls it back using his Q. His W increases his speed and starts his police alarm; his red and blue lights start flashing and blinking like a police car. His E will also activate his alarm and his lights; however, they will be played in a different tone.

The electric field can be seen generated around his fists. His ultimate detonates his blue static field in an area. 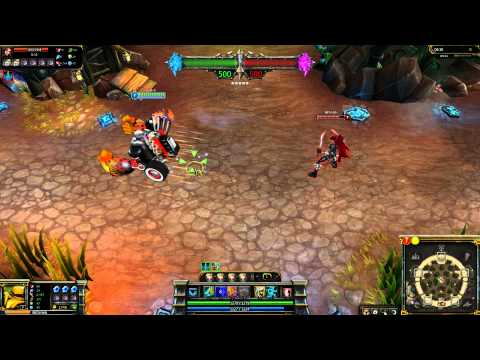 For a price of an Epic skin, Piltover Custom Blitzcrank fails to deliver good expectations. Perhaps it is because the skin is over 10 years old. Nonetheless, it does have some pretty good aspects. Blitzcrank is a robot working on the front engine of a car. His arms have flaming paint on them, demonstrating that he is a racing car.

His passive creates a blue mana barrier as a shield. His Q fires his rocket grabber; if his big yellow hand hits a target, it will pull him back to Blitzcrank. His W is the most noticeable feature of this skin. Activating it causes his engine to overload, pipes on his back create smoke and flames, and he uses his car wheel to speed up, making him sound like a racing car. His E and R use a blue electrical field. 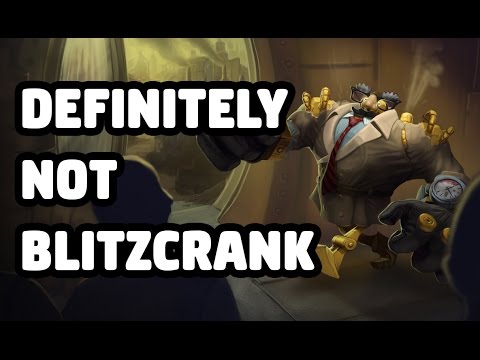 More of a humorous skin than an epic one. Not Blitzcrank disguise him in a human suit and a funny-shaped mask. You can find him wearing a pair of glasses attached to a big nose and a huge mustache underneath it.

Although this skin doesn’t bring any new particles or animations, it is still loved by many Blitzcrank players. His Passive creates a blue mana shield when he gets low on health. His Q sends his rocket grabber in a direction.

His fists are covered with black gloves. His W overdrive Blitzcrank, increasing his movement speed and leaving a blue trail behind him. The strong breeze of wind will blow against his red tie, hinting at his fast speed. His E overcharges his fists with electrical power. Lastly, his ultimate set off his blue static field in a large area. 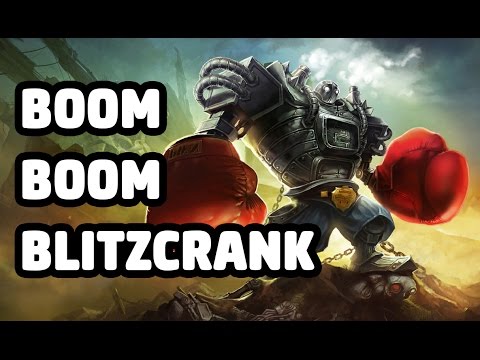 Blitzcrank is a strong boxer, mainly because he is made out of hard steel. His body is silver and black. His hands are big red boxer gloves, and one of his eyes is marked in purple to imitate a bruised wrestler.

Starting with his core ability, Blitzcrank sends out his red punching glove, grabbing one entity in his direction. His W channels Blitzcrank with energy. His body overdrive and move against the wind, pipes above his back will leave gray smoke behind.

His E generates an electrical field around his red fists, knocking one enemy in the air and leaving an electrical particle as an outcome. His ultimate channels a blue bolt from the sky to hit an enemy that Blitzcrank punched. Activating his ultimate explodes his static field. 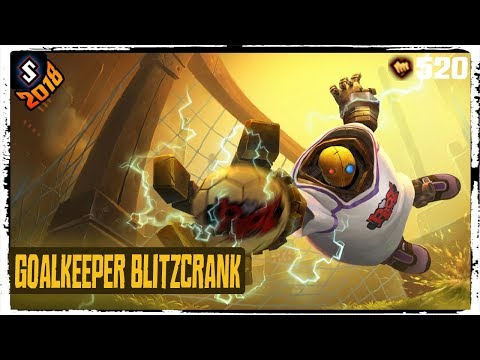 Blitzcrank is in a football match! And he is the goalkeeper of the Riot team. He is dressed in a big white T-shirt that has Riot’s company name on it. His right eye is red and smaller than his blue left eye. He is also wearing sports shoes to fit his aesthetics. Considering his big size and his large hands, he is the perfect goalkeeper.

Mana Barrier is a blue transparent shield that is activated after taking a certain amount of damage. Blitzcrank’s fists are wearing black gloves with a symbol on their center. Blitzcrank’s W makes him run faster.

His white T-shirt starts to wave against the wind; you can see the name of Blitzcrank on the back of his T-shirt as well as number 8. His E channels electrical power through his arms. His R activates his strongest ability, detonating a blue static field leaving electrical particles behind. 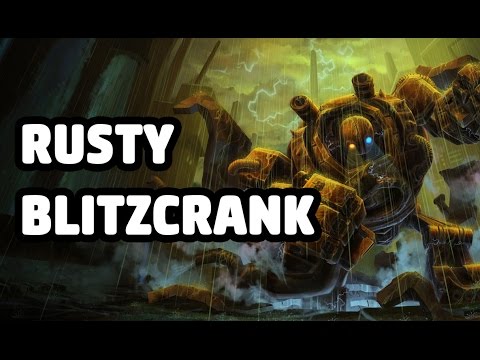 Probably the worst skin released for Blitzcrank. It doesn’t deliver any new animation, any new particles, or any new accessories for costumes. Instead, it is just a rusty version of how Blitzcrank originally looked. His eyes are reddish, which hints at his old body.

Blitzcrank generates a blue shield around himself after getting below 30% health. His Q fires his rusty right hand in a direction. Target hit will be pulled by his rusty black spring. His W begins his overdrive, which is surprisingly still functional.

Blitzcrank would start moving faster as a huge amount of smoke would start coming from his pipes until he exhausted his core. His E creates an electrical field around his fists. His ultimate strikes a lightning bolt to enemies hit by Blitzcrank as it’s passive. Activating it will erupt a blue static field.