Microsoft Edge vs Firefox in 2023: Which Browser is Better?

In every industry where there is no monopoly, there exists competition between two or more entities that populate that industry. This type of competition is more pronounced and heated when the competitors render the same services, produce similar goods, use similar strategies and resources, and have similar target consumers.

This kind of rivalry exists between two giants in the diverse tech field, Microsoft Edge and Mozilla Firefox. Thus, in this article, we will discuss at length issues concerning these two browsers. The article has been simplified under the following headings:

These two prominent browsers have rich pedigrees that many of their contemporaries do not have. Mozilla Firefox first came into the limelight as early as 2002 when it was established. Since then, it has become an ever-present browser app that many people have developed an unwavering loyalty to. Mozilla Firefox was unarguably the so-called poster boy among browsers during its early days.

Although relatively younger than most of its peers, it competes fiercely. But this sharp tooth can be attributed to its background and the well-known developers.

Microsoft Edge vs. Mozilla Firefox: Where It All Went South

However, things went spiraling the wrong way as soon as the enigmatic Google Chrome Browser made an entry into the industry. This browser went on an upward surge and has not looked back ever since.

At present, Google Chrome is unarguably the industry’s leader while closely followed by Safari. Despite this, the margins are not too pronounced, and each browser knows that the battle to outdo each other is a war that never ends or halts for a moment.

Thus, it seems the battle for third at the moment is delicately poised between Microsoft Edge and Mozilla Firefox. Without wasting more time, let us take a deeper look at how these two browsers compare. 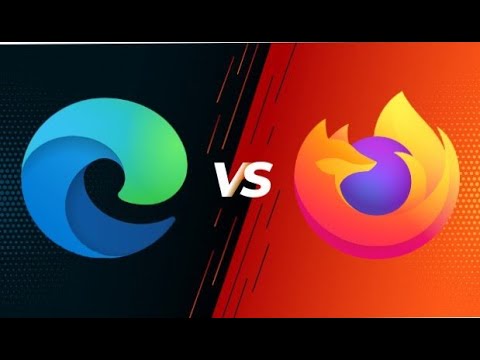 This observation is that loyalty is established when you use something for long, especially when the relationship is maintained well. Thus, it is difficult for some users to change camp. But when it comes to browsers, loyalty is hardly maintained.

This can be attributed to the fact that developers of these browsers are always on the lookout to make their offerings more enticing than those of their rivals.

Thus, if one browser comes out with an innovative feature today, another will be planning to create something fresh tomorrow. Thus, customer loyalty is somewhat hard to establish. Therefore, it is these similarities and differences we want to look at. We will see which browser convinces us more.

To determine what makes an application great, many things have to be considered. The app in question needs to tick most, if not all, the right boxes. One of these factors includes availability. If an app is available on various mediums, then the chances are that it will be duly recognized and used by many. Its significance will reach deeper than those who suffer from availability.

Other factors include user interface and usability, security and privacy, performance, features and extensions, and many more

These two browsers show incredible availability on all major platforms you can think of. However, Edge seems to be the one without the Edge here because the browser version for Linux distros is still epileptic and needs to be revamped.

On the other hand, Firefox has enjoyed tremendous success when it comes to Linux distros. It is the device’s default browser and also Ubuntu for Desktop. Also, Microsoft Edge seems to make up for this by being the default browser for Windows 10. And the browser is also compatible with older versions of Windows.

And where perhaps, Firefox wins this battle is in mobile phones. The browser works decently on mobile phones as compared to Edge. Aside from the world of Windows, it is hard to imagine Edge finding a good foothold.

The differences in the user interface between these two browsers are not too pronounced. Still, there are differences worthy of note. The most prominent of these differences is that both browsers are built on two distinct engines. Firefox employs its brand Quantum browser engine, but Edge is established upon the widely-known Chromium engine.

Also, when it comes to search engines, Microsoft Bing is the default search engine for Edge Browser, while Firefox uses Google as its most preferred search engine.

You will find similar features on both browsers, such as dark mode and grouped tabs. When using Edge, you are allowed to go through tabs vertically. Thus it is easier to use, especially if you like opening results from a search in new tabs.

Also, you will find a unique feature in Edge which allows you to conduct searches without quitting an already open window. This is referred to as Search in Sidebar.

The only problem that Microsoft Edge has here is its not-too-frequent glitches. Firefox scores a good point in this aspect. The browser which has undergone a series of refinements rarely freezes. It is regarded as one among a few select browsers based on a unique engine but still holds its ground against others.

When it comes to features, these two browsers are not in lack. They possess tons of features that ensure users find comfort and ease while browsing. Microsoft Edge boasts unique features such as the Vertical tabs and Search in Sidebar. When it comes to casting, although Firefox can do a lot in that regard, it is still no match for Microsoft Edge.

Both browsers have many invaluable features that you won’t find on many other browsers. These unique features include Autoplay restriction, Text to speech, and the In-browser screenshot tool. You will also find other features typical of modern browsers, such as Reader mode and Spell check.

Thus, this allows it to find compatibility with most Chrome extensions. The creators of Microsoft Edge must have been aware of this, and all they needed to do was bring into fruition a browser app that would accommodate such extensions.

As for Mozilla Firefox, its case is quite interesting. Even though the browser is based on a distinct engine, its extensions share similarities with those you will find in the Chrome-based Store. The only difference is that some of these extensions are better on Firefox. Microsoft Edge and Mozilla Firefox are great when it comes to resource management.

Edge comes with another unique feature called sleeping tabs, which reduces the activeness of certain system resources. In this field, Firefox prides itself as the most enhanced and ultra-modern browser capable of catering to a user’s entire browsing needs. And keen observation has shown that the browser isn’t merely mincing words.

Both browsers are known to support cross-platform syncing; thus, there is hardly much to separate both parties. This is absurd because both browsers seem to be weak when it comes to loading certain web pages. It is quite uncertain if the problem came from the web pages themselves or the browsers.

When it comes to security and privacy, Microsoft Edge and Mozilla Firefox are front runners compared to other contemporary browsers. Both browsers allow you to restrict social trackers, third-party trackers, cookies, ads, and many malicious contents online with relative efficiency.

You will also find private browsing modes which give you anonymity from certain server networks. But we can’t for certain say that the security and privacy offered by both Microsoft Edge and Mozilla Firefox are thorough.

Thus, we will advise that you search for an enhanced VPN application to give you the top-notch security and privacy you desire when using the internet.

1. Which of the two browsers should I try?

Both Microsoft Edge and Mozilla Firefox are great and efficient browsers. Thus, you will have no issues trying any of them. However, the only problem you may encounter is that of compatibility.

Microsoft Edge works best on Windows but does not fare well on mobile phones, while Mozilla Firefox does well. Thus, you can try anyone as long as compatibility is ensured.

2. Can Microsoft Edge and Mozilla Firefox help me achieve my browsing needs?

Both browsers have been tested and trusted. They are among the best browsers in the industry. Thus, they work efficiently on most digital devices.

The only thing is that each browser comes with certain unique features and modes of operation. Thus, you have to discover the one that best meets your needs and utilize it.

3. Which of the two browsers will provide me with better privacy and security when browsing the internet on my device?

When it comes to security and privacy, Microsoft Edge and Mozilla Firefox are front runners. Both browsers allow you to restrict social trackers, third-party trackers, cookies, ads, and many malicious contents online with relative efficiency.

You will also find private browsing modes which give you anonymity from certain server networks.

4. Which of the two browsers has more extensions?

As for Mozilla Firefox, even though the browser is based on a distinct engine, its extensions share similarities with those you will find in the Chrome-based Store. The only difference is that some of these extensions are better on Firefox.

Microsoft Edge and Mozilla Firefox are up there when mentioning the best browsers in the world. It is hard to pick a side between the two. But then, if you don’t make use of Windows, it might be a straightforward business. If you look at the factors we have used to distinguish between these two; you will realize that both browsers seem to hold their ground still.

If you need a browser with a minimalistic approach, you will certainly like to use Microsoft Edge. Edge is packed with features and will be a welcome tool in the hands of beginners. But Mozilla Firefox, which is also rich in features, is a bit more advanced and will require some patience from a user if one wants to reap the rewards of all that the browser offers.

Also, given how close the rivalry is, choosing one browser over another is never an easy task. Among fans, the choice may be on a personal level. We have also to say that Google Chrome’s entrance into the market significantly impacted others.

It made many of them realize that the battle for relevance is fierce and is continuous. This has made Microsoft Edge and Mozilla Firefox, and other browsers look at making their brands better and offering quality and innovative services to the populace out there.

At present, some of these browsers like Edge and Firefox are focused on the security and privacy aspect of their brands. And this may be a warning to Google Chrome that relies heavily on ads to keep soaring.

Why is My Xbox Controller Blinking? (+ 8 Tips on How to Fix It)
What Does S Mean on Snapchat & How to Answer in 2023
10 Best Free Proxy Server List of 2023 (Free HTTP & Socks5 Proxy List)
Twitch Partnership Requirements: How to Become a Partner
How to Get Free TikTok Followers in 1 Click 2023
How Much Does TikTok Pay Per View in 2023?
Steam Winter Sale 2022 - 15 Must Play Games!
[Parent's Guide] Is Snapchat Safe for 12 Year Olds?