Although it has been a few years, the popularity of 2048 is still unabated. Are you looking for games similar to 2048? Turn on your brain to create high scores!

For puzzle games with numbers as the protagonist, this is addictive gameplay. The player slides the squares with numbers on the 4*4 grid so that the addend is a multiple of 3 and 3. When there is no room to move on the grid, the game ends, and the sum of all numbers is your final score.

1024 is a facsimile of 2048. Rather than reaching the 2048 tile, you are supposed to get the titles to only 1024, which is quite easy, I believe, as compared to 2048. The game mechanics are just the same. All you have to do is move the tiles on a 4 * 4 grid and try to merge similar tiles to double the current number of the tile you just merged.

But this doesn’t mean that you can not go above 1024. Basically, as many 1024 tiles you have, the better it will be for you to make pairs for a larger and successive number.

Have you ever seen a honeycomb or a hexagonal tile? Well, rather than having a traditional 3*3 or 4*4 projection of the board, you have a hexagonal shape game board which is relatively similar to a honeycomb, as the name suggests “Hexic.”

Anyhow, Hexic 2048 walks in the footsteps of 2048, where, as a player, you are supposed to merge similar tiles and get to the 2048 number. What’s the difference, then? The board! That’s all, to be honest. The rules are also the same. If you somehow restrict the movement of your tiles, then the game is over.

243 is a vivacious game in terms of gameplay. So far, we have been talking about merging two tiles into a single one, but 243 is way above contemporary orthodoxies some of the games have induced so far. For instance, as a player, you are supposed to merge 3 tiles into a single one. But be wary; the game works on multiples of 3.

Similar to Hexic 2048, 2048 Hex is a game that provides players with a hexagonal board. The only difference between this game and the other one I mentioned is the colors. In this title, you get to see RGB tiles in action. Apart from this, all the rules are the same. For example, you have to match up to two similar tiles to get twice its number.

Then repeat the process until you get to the most wanted 2048 tile. Isn’t that simple? Well, to be honest, the majority of the 2048 games are, apart from the fact that getting that tile can be a nuisance at times.

Chain Fruit 2048 Puzzle game is quite a unique title in terms of board and game projection. One might ask, how? Well, when compared against traditional board matching games, it turns out that chain fruit doesn’t do the same and brings a genre a notch further while ensuring that creative elements are induced at the right time.

For instance, in this game, you don’t match the numbers but fruits. Two similar fruits, when combined, will give you another big and juicy fruit. But however, there’s a number dedicated at the top. Two oranges in this game might be two 3s, and so on. So yeah, at the end of the day, you do need a 2048 number, but in the shape of a fruit.

It might sound like a simple game, Fives, but it will take you some time to get used to its algorithm. Because Fives is way different than what you have been used to while playing 2048. For particulars, you can combine twos and threes, but not twos and twos. In short, everything has to be related to the number 5.

You can combine two and three to get 5, and the 5, and 5 to get 10, and so and so forth. This is how you combine, like numbers (table of 5), and unlike numbers (twos and threes). A deceptive game it is, but definitely worth a shot.

Out of all the mentioned games above, White 2048 takes on a very different approach to 2048. For example, you are supposed to target white boxes and large boxes in this game. But the revision comes in where you have to detonate those boxes. Yeah, with bombs. How is this even related? Well, the board is similar, and tactics remain the same.

Join the boxes, try to get large ones, and detonate them at the right time. Not to mention, you have to reach a 4096 score to beat the game and let me remind you, it’s not strawberries and cupcakes with white 2048 as you can’t corner the boxes; otherwise, you’ll get trapped.

As the name suggests, Chain Cube 2048: 3D merge game really executes the 3D approach. For instance, rather than having 2D boxes on a 2D board, Chain cube 2048 brings about a revolution in terms of projection. Here, both the cubes and the board are 3D. On top of that, you have to slingshot the cubes at an already residing set of cubes.

As you throw the cubes, the cubes on the other side bump with it and combine to form a new number. To be honest, it’s a fun game. But yeah, there’s just one restriction. The color. You have to cannon the cubes at the same color (with the same number as well), so yeah.

The Countdown Number Puzzle game is not like 2048, where you have to match cubes. But it’s a little different in terms of gameplay. Here, you are supposed to play with four basic mathematical operations, name, addition, subtraction, multiplication, and division.

Basically, the game will be testing your mathematical skills, imagination, and creativity. For what it’s worth, you can play around 100 mathematics puzzles in every package. In short, around 1000 mathematics questions keep you charged up.

Instead of having blocks, or cubes, Bubble Buster 2048 makes use of balls. To be honest, that’s the only difference between other contemporary 2048 games and this one. The remaining rules are just the same. For example, all you have to do is swipe the balls, merge them, and get to that 2048 number.

Apart from this, you also would be required to merge the balls with the same color and number, so do keep that in mind. Also, the GUI is a little different as well. The game incorporates other obstacles like boulders and boxes, which you would be required to pulverize in order to complete the level.

2048Endless: Classic game follows the footsteps of all the 2048 games. The only remarkable difference lies in its name. Yes, it’s “Endless.” In short, the game doesn’t come to competition even after getting 2048, 4096, and 8192 tiles.

You get to play endlessly, hence making this title more challenging in terms of continuity. Anyhow, the objective and the rules remain the same, so there aren’t any issues regarding that.

Here I would definitely say that 2048 Alphabet is a very competitive game in terms of how things work on the board. Here, you are not supposed to merge numbers but alphabets. You have to join the same color alphabets and ensure that you reach “K.” but this thing doesn’t endorse limitation on the gameplay;

Hence you are free to play even when you have reached the letter “K.” All in all, it’s a fantastic game if you want something different from 2048 generic titles.

Again, 2048 Cubed (3D) is a copy of 2048, but the only difference is its dynamic nature of reproducing numbers. On top of that, as the name suggests, “3D”, the game entails a 3-dimensional projection of the cubes, skyrocketing the overall gaming experience.

Apart from this, the rules are the same. All you have to do is match the same number of tiles, and bingo, you are good to go. 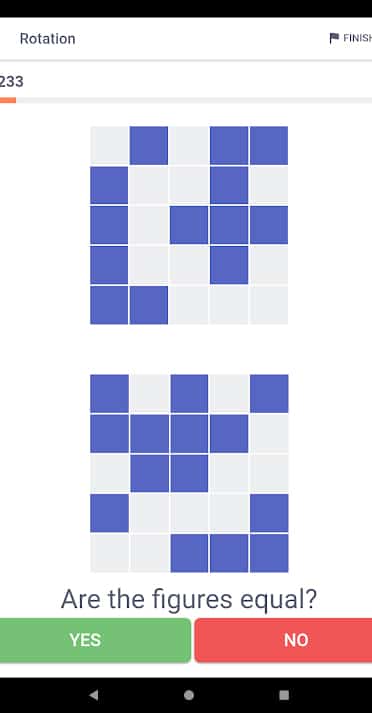 2 x 2: Train your Brain is a cognitive boosting game that allows you to condense your focusing skills and use them across many out-of-the-box situations. Not to mention, the game contains around 7 stages. Those 7 stages are all fun to play.

For instance, Schule table is a psycho-diagnostic game that puts your peripheral vision and visual perception skills at stress. All in all, it’s a game that may not resemble contemporary 2048 games; it’s still a wonderful masterpiece to look into.

2048 game requires the combination of matching tiles with numbered tiles. You need to strategically play and be super smart to get high scores. These valuable tips can help you get a high score in 2048 game:

1.  Learn the game board tips

To play you need to use the up, down, left, and right gestures. Tiles move based on the side you swipe. The key thing is knowing how to play the board and keen on the game instructions.

Temptations may come that can make you want to chase the large numbered tiles. You should try to focus on combining smaller tiles rather than large ones. If you focus too much on the large tiles, you might lose out on available chances.

3.  Use the corners wisely.

The best strategy is to bring the new tiles to the middle and swipe to the corners when you want to combine the tiles. Your combination points should be at the corners with the working area being in the middle.

Planning is crucial when it comes to the 2048 game. It will help you organize your tiles and see the tiles to combine first and the perfect moves to use. Also, try and merge visible multiple cards at the beginning of the game. If you clear up space in the board, you will have a larger playing field.