Best Draven Skin in League of Legends [All 10 Ranked]

The Glorious Executioner – Draven, is a soldier inside Noxus who turned into a popular figure for his astonishing ax spinning skill. He made a name for himself by showing his talent to the people inside the arena. Always looking for stronger competitors, Draven wants to prove himself as the superior fighter by executing the strongest warriors out there! That’s how he became The Glorious Executioner.

In League of Legends, Draven plays the role of a marksman. He is considered one of the hardest marksmen to play, if not the hardest. His playstyle requires constant attention to catching axes, you can never sit back and relax, but this pays off with Draven’s terrifying raw damage.

There have been 10 Draven skins since his release: 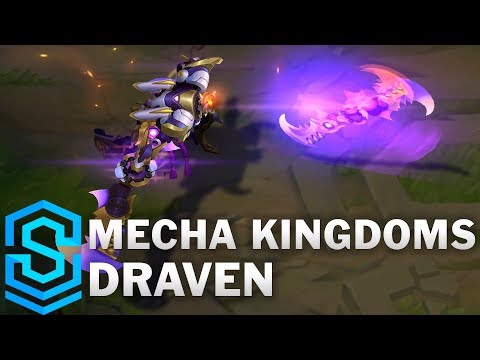 Draven is making his glory shine through his white and golden mecha armor. In this skin, his whole body is covered underneath a solid mechanical suit. His purple eyes can be seen glaring through his steel helmet. Draven has purple spinning axes with many teeth edges.

Throwing his axes leaves a light-purple trail, and their landing mark is Mecha’s Kingdom sigil. His W empowers his Mecha suit; flames will start going out from the back of his head and the engines on his back. His E throws both of his purple shining axes in a line. His R hurls large axes that shatter the earth, creating purple lines. 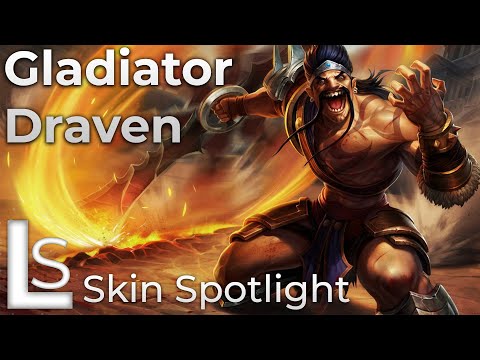 Although the skin model might look old, Gladiator Draven had been a fan favorite for all Draven mains. Referenced to the Gladiator movie, Draven dressed as a glorious Gladiator, holding two double-edged axes. His weapons are inflamed with power, showing off orange particles whenever Draven uses his Q and starts spinning them as well as a faint sound of flames burning.

His W is an adrenaline rush; the tattoo on his arm can be seen glowing from the effect. His E throws both axes, creating a sound similar to a flamethrower. His R tosses both of his axes into flaming spinning wheels. 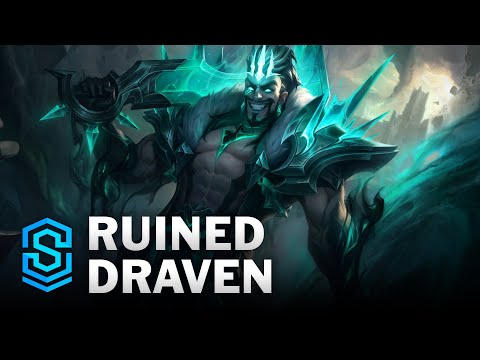 Alongside the new demonic voice, Draven has. Being controlled by the curse of the ruined king, Draven’s skin has turned completely pale. His eyes are also consumed glowing white aura as no pupils can be seen. The effect of the green ruined mist has taken over his body.

He has green axes that spin in the air; their landing spot is a small circle marked with the ruined king’s crown. His W and his E both create green-shadow-like effects with obnoxious sound cues. His R hurls his large axes, leaving a green trail through the path they take. The recall animation in this skin is the best among all others. 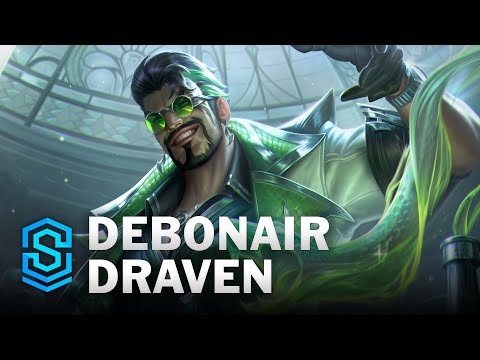 Draven is a popular club host, wearing round green glasses and combining them with a stylish hair comb and a white suit. Draven can be seen wearing an opened button-up, exposing his chest and silver necklace. His ax’s whole hilt is a silver snake. And the sharp edges are colored in green.

Each time Draven throws an ax with his Q, a landing mark will be generated, progressively showing a silver snake with green eyes. His W creates a sound cue while a bright white aura appears on his hands. His axes leave a thin trail of green lines, using his E or his ultimate. 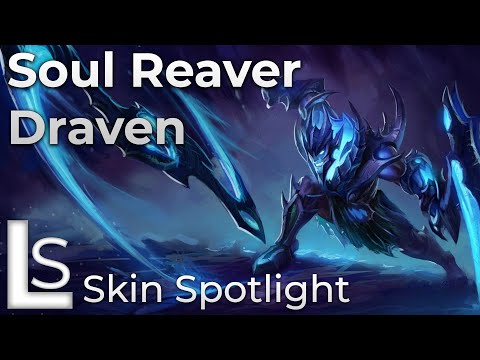 Another old skin on the list that takes a high spot is Soul Reaver Draven. It is said to have the smoothest auto-attack animation compared to all other skins. Draven is a soul gladiator! He reaps with his new scythe-like axes. His whole aesthetic is blue.

His skin is glowing bright cyan, and his body is covered with sharp-edged blue armor. Draven’s axes generate blue particles and effects, almost appearing as if they were frozen. Perhaps the souls of the dead left this cold atmosphere. Although some might claim the model of this skin is outdated, they won’t deny the axes look best compared to all other skins. 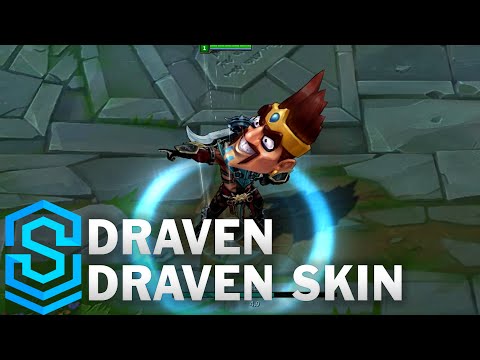 Players wonder if the work of this skin was lazy or completely genius. Unlike other skins on the list, this one is a total meme, made to create hilarious moments and ridiculous spotlights. Draven Draven is the same as his classic appearance but with an utterly giant head, similar to the toys used in vehicles that shake when they are on a ride.

His face is an unchanging expression of an egoist character, having a huge grin, widely opened eyes, thick brown eyebrows, and massively spiky hair. And it perfectly matches with the glorious golden particles and effects created by his abilities. 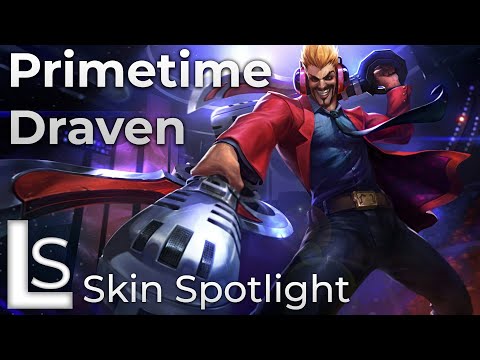 Draven is an announcer with a new ‘modern’ look. He has spiky blonde hair and big red headphones covering his ears. His body is dressed in a red suit and a black tie. This skin has unique sound effects, his axes are attached to huge microphones, so it is not surprising to create a loud sound cue.

The landing mark for his axes is red microphones. His ultimate ability hurls his axes into a giant orange-colored wheel of death. The best part about this skin, however, isn’t the appearance but the lines! The new voice-over is a complete parody and jokes for Draven. 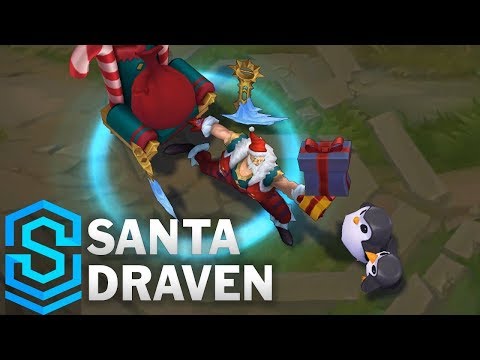 Why would Draven celebrate the holidays when he could be the one to initiate them? Of course, he would make the perfect Santa. Dressed almost like Santa, except for the parts where his sleeves are ripped due to his muscular arms, Draven is carrying icy axes with golden hilts, defeating his enemies while wearing a Christmas hat.

Whenever his ax is spinning, snowflakes can be seen dropping from it. The landing mark is a golden Christmas badge. His W creates a freezing sound effect, and Draven starts leaving a blue trail behind. His ultimate throws his icy axes, shattering the ground and freezing it in the process. 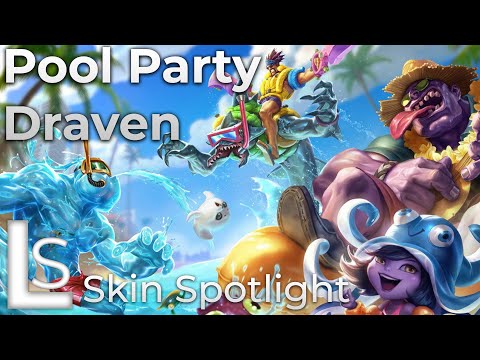 Draven is ready to show his glorious talent at the swimming pool! He is wearing black sunglasses, a yellow life vest, and blue floaties on both arms. He is also wearing black swimming pants. His weapons are made out of plastic, filled with water. Throwing his axes on a target makes a sound similar to throwing a water balloon at someone.

His ax landing spots are marked as Lifebuoy. Activating his W reveals waving water underneath his feet. His E throws his axes leaving water particles around. His Ultimate creates a huge water splash whenever it hits a target. 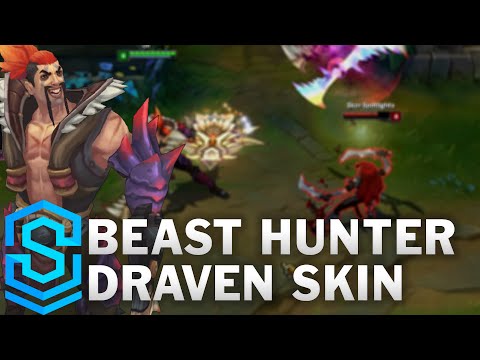 Draven is a famous hunter dressed in an old tribe theme. His hair is long and put into a spiky ponytail. It is also dyed and mixed with black and ginger. His axes are made of large fangs of beasts he had hunted.

His spinning ax glows a dark purple aura that matches his leather armor, activating his E knock enemies hit by his axes aside, unleashing more purple effects from the impact. His ultimate spins his large weapons in a direction; the aura and trail it generates are colorful, mainly being red. This skin didn’t change much, and compared to the other one, it isn’t worth buying.