11 Best Evelynn Skins in League of Legends (All Ranked)

Evelynn, Agony’s embrace, is a demon, but her beauty and charm make her the fans favorite LoL character. She traps her unsuspecting victims, especially those that display pain and suffering, with her beauty. Considering how provocative her skins are, you’ll not fail to find one that suits your desires. Here are the best Evelynn skins in League of Legends. Check them out to find the one that will make your Evelynn extremely beautiful.

Evelynn is a demon that entices her victims with her glamorous beauty. She preys on those who are suffering or in pain. To maintain her stunning looks, Evelynn has many skins available to players. The protagonist has many skins in her name that gives gamers an array of options to choose from.

In this post, we have highlighted some of the best Evelynn skins in LoL. Keep reading to find the one the will give your Evelynn the best looks and with better capabilities. 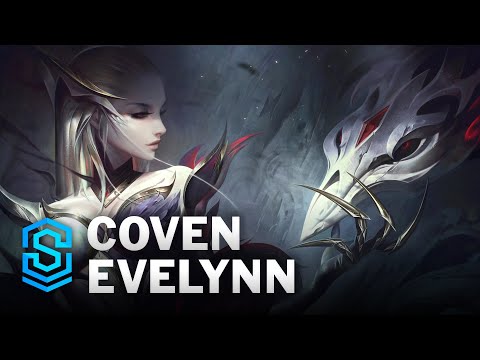 As the latest Evelynn skin, you will definitely expect much from the Coven Evelynn skin. Even though it’s the most expensive skin, it’s worth its price. It is packed with features and perfectly showcases the demonic energy. The snake-like lashers are better than those in Blood Moon.

Coven Evelynn comes with exciting animations, sounds, and advanced particles. It has a new death animation, home guard animation, and new emotes. You’ll also enjoy the unique dance style that beats all the other Evelynn skins in this listing.

The list of the great things you’ll find with the Coven Evelynn is long. But you should be willing to dig deep into your pocket for the best Evelynn skin. This is because it will be fun to play with this skin as it delivers everything that you can get in an Evelynn skin. 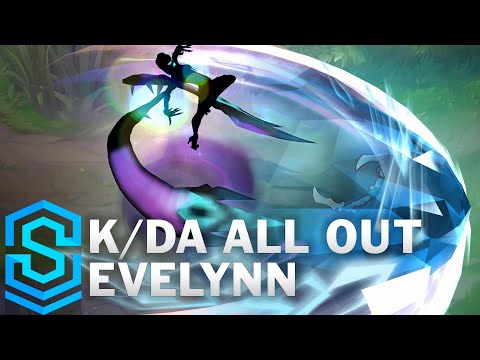 K/DA All Out Evelynn comes as an improved version of the K/DA Evelynn skin. The dressing is similar except for the change in her hair color that transforms her completely. The choice of color is still pink but blended with blue and purple to make it more vivid and lively.

Even if you are not a K/Da fan, you’ll love this skin. The skin has robotic sound effects and features spikes on the protagonist’s lashers. Your victory dance has background music that add to the beauty of this Evelynn skin. What’s more, the skin has some pretty amazing animations, particles, and sound effects. 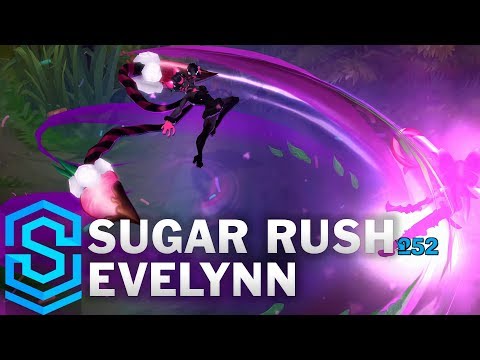 This skin is among the best Evelynn skins that will keep you anticipating. Evelynn looks like a cat with a chocolate strawberry tail, hair, leggings, and gloves. These drastic changes bring fantasy to life. Furthermore, the skin has unique particles, with the W being a melting candy heart. The skin’s sound effects, visuals, new texture, animations, and sometimes voice processing takes your gaming to the next level.

With Evelynn being sweet then killing you the next minute, Sugar Rush Evelynn gives you a whole new gaming experience. The character model of the skin is brilliantly distinct and would appeal to any LoL gamer, novice or experienced. 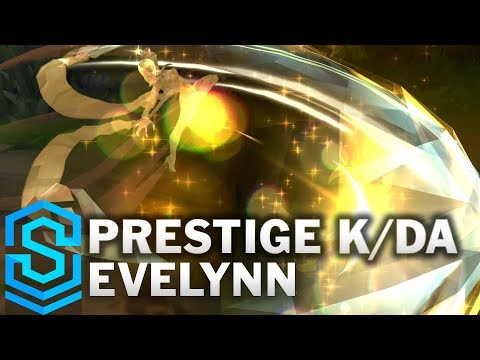 This prestigious version of the KDA skin gives Evelynn a new look. She wears golden and shiny clothes giving her a stunning look. Her blonde hair complements her fantastic style. Let’s not forget her sleek white jacket. Most of Evelynn’s features have been transformed to take the golden color scheme in this skin. 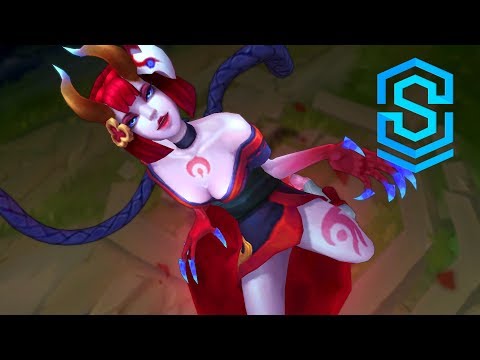 Blood Mood Evelynn portrays her as a demon wearing revealing clothes. This skin is a favorite among many League gamers because Evelynn fits the skin’s theme perfectly. The skin will blow your mind with Evelynn’s beauty, new particles, animations, and sounds. She changes into a demon in her invisible form with a backing animation that completes the whole scenery.

The skin has red particles, and Demon Shade sounds to match the theme. She plays with a blood-like moon for her new recall animation. Generally, the Blood Moon Evelynn could have achieved more, but it’s still a great skin to invest into. It’s not a bad skin, but it’s also not that perfect. 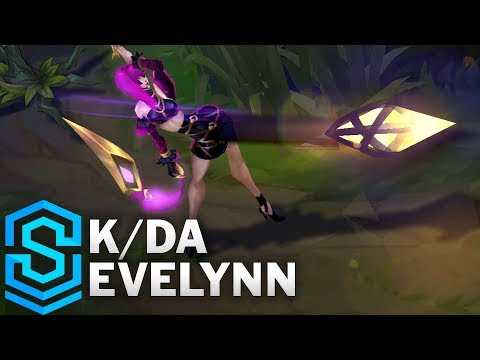 K/DA Evelynn is a feature-packed skin that gives you something out of the ordinary. In this skin, Evelynn wears modern clothes. It also features new particles, animations, and sounds. K/DA Evelynn skin has the best splash art with recolored and vivid particles. Evelynn stands out with her unique and edgy look.

However, she retains her moan for her W and her basic dance style. The new sound effects do not conform with the theme conveyed. But, with her dancing with a disco ball effect on the floor, you’ll find K/DA Evelynn eye-catching. The gold and black outline during her Hate Spike is just spectacular. The skin also fails to implement its theme effectively, but it’s still a fun skin to try out. 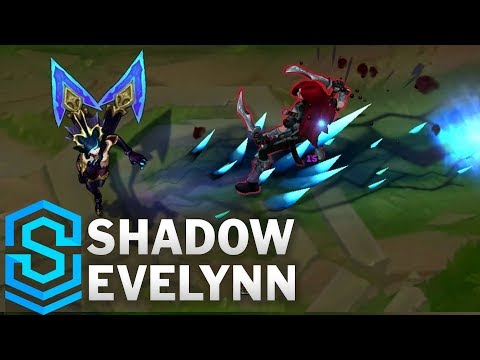 Shadow Evelynn is a popular skin that portrays Evelynn as a vampire with vividly colored clothes. Available at a lower price, Shadow Evelynn skin has all that you’ll need. The new particles and animations make this skin stand out. You’ll notice that her particles have a darker hue to them. Even though this skin closely resembles classic Evelynn, its advanced features are worth reckoning.

From the blue color, W heart remake, and a new recall, this skin will not disappoint you. The recall has Evelynn posing as she leaves into a dark mist. Shadow Evelynn should be your first choice when looking for a cheaper skin that will still give you a whole new gameplay experience. 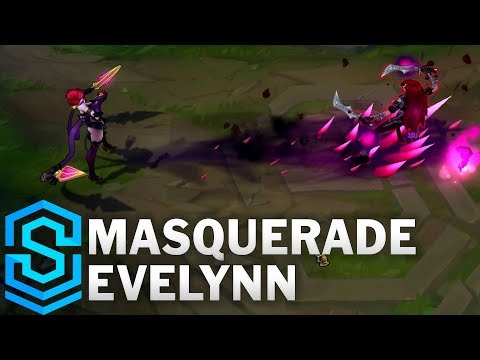 Masquerade Evelynn features the protagonist wearing a set of different clothes, including a dress and a mask. The gold lines on her clothes perfectly match her light skin, and her red hair completes the skin’s theme.

Even though it does not have any new particles, animations, or sounds, Masquerade Evelynn is one of the most realistic LoL skins ever. However, it doesn’t need them because everything in the skin fits perfectly. The skin keeps her basic personality and showcases her sexiness. Masquerade Evelyn is a remodeled skin that portrays the concept as required.

Even though it lacks new features, the color schemes to the overall theme are what a player needs in a skin on the lower price end. 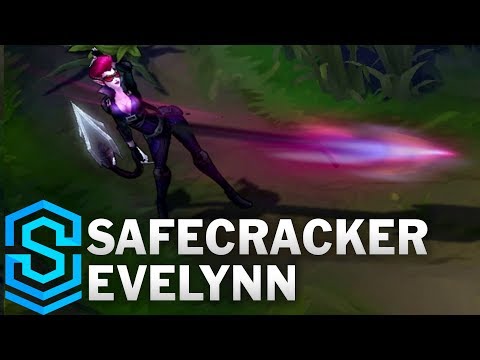 In this skin, Evelynn looks like a thief fulfilling her mischievous personality. In a tight darkish blue suit and pink hair, SafeCracker Evelyn portrays an eye-catching theme. Even though it has new particles, the sounds and animations are similar to the base skin. The particles have a dash of electricity and pretty cool animations.

SafeCracker Evelynn skin is just perfect for Evelynn in its own way. However, this skin fails to display the thief aspect of the protagonist very well. Although the concept was super-brilliant, appears to have been poorly executed. Nonetheless, for a price of 750 RP, the skin is worth tryin out. 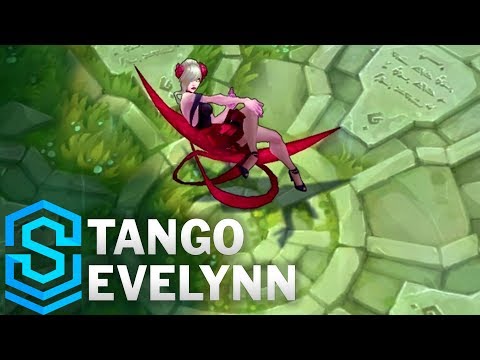 Tango Evelynn is a straightforward but classic skin, with Evelynn looking like a Tango dancer. From her hair, roses, red dress to her shoes, the seductive dancer’s theme in the skin was well executed. It not only presents her demonic nature but also showcases her charming qualities. By looking at Evelynn, you’ll know that she is ready to kill someone.

It only features new particles but no new animations or sounds. They match the color of her dress with dark red petals. If you’re looking for a skin that brings its concept to life and has Evelynn ready for battle, you should try Tango Evelynn. Since it’s cheap, Tango Evelynn does not offer much, but it won’t hurt to check it out. 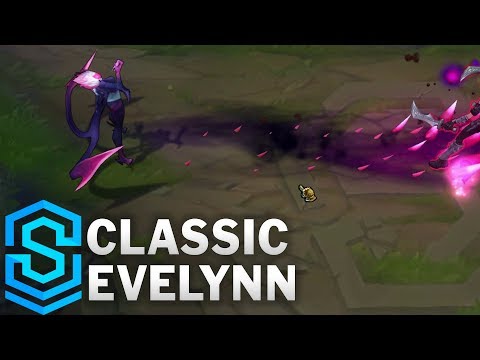 Classic Evelynn is a base skin that introduces the main character’s features. Evelynn has the Shadow walk capabilities in which she fades away into the shadows and can only be seen by nearby enemies. Her Q ability involves firing a series of spikes, and when her W ability is active, she removes anything slowing her down and avoids unit collision.

Classic Evelynn introduces players to excellent Evelynn capabilities that the other skins have built on. As the mother of all skins, you wouldn’t mind going back to where it all started by taking this skin.

That’s it for the comprehensive review of the best Evelynn skins in League of Legends. We hope you found this post useful. Which of these skins is you favorite? Let us know in the comments section.