Best Talon Skins in League of Legends (All 8 Ranked)

The Blade’s Shadow – Talon, is a powerful Noxian assassin that strikes when his enemies least expect it. When he was a child, he had to fight on the streets to survive the cruelty of Noxus, all until he was adopted by a Noxian family. This family has recognizable characters, Katarina and Cassiopeia.

Being strong and brutal from a young age, Talon was trained to become a fearsome foe that could assassinate and escape any situation, making him a rival for Katarina.

Talon is currently a Mid Laner and a Jungler, though he is more known for being a Mid Laner. His skills are all about bursting his enemies and escaping. If the burst damage didn’t kill his target, then the passive bleeding that comes afterward would do so.

Talon is also infamous for his lethal roams; once he is missing on the map, you’re likely to be dead. 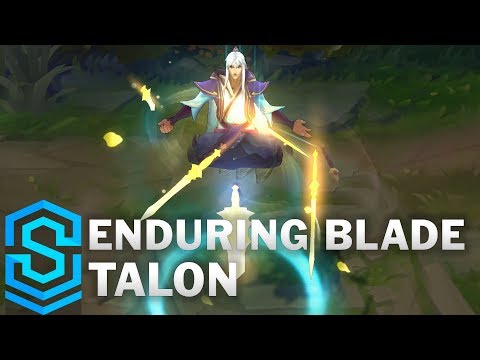 Taking the royal approach with this skin, Talon is no longer an assassin from a no-named family. Instead, he is a former defeated king. Talon has long white hair with bangs covering his forehead. His clothing is somewhat of royalty even after his dethroning. His blade is short and thin, crafted with a golden hilt.

The strike of his blade leaves dark green particles behind, activating his passive will cause a large poisoning aura to appear on his target. His Q launches himself on his target to stab them with his sword, leaving a bluish afterimage behind.

His W throws three deadly blades in a direction before turning gold and returning to Talon. His ultimate enters him into stealth, causing all his blades to be arranged in a circle before gradually shining gold and being sent back to Talon. 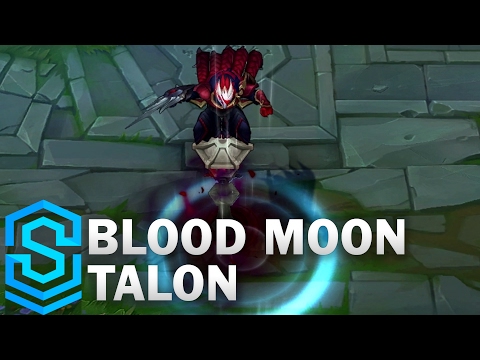 Covered in red, Blood Moon Talon’s aesthetics satisfied the skin line standards with his new clothes and appearances. Talon covers his face with a narrow white mask, having a mark on the left side while only a single opening for his blue-glowing eye on the right.

Talon’s attacks and abilities cause heavy bleeding, and it is shown through the huge amount of blood that appears as particles or effects for his damage dealt. His passive is shown as three lines of brushed blood. His W throws three flying blades then expands into shurikens before returning to Talon, leaving a blood trail in their path.

When he activates his ultimate, 12 blades start to fly around him as he enters stealth. Then they start spinning rapidly, turning into a dark star before piercing through the target talon attacks. 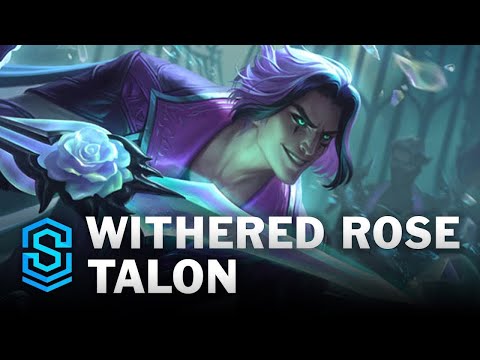 Perhaps this skin is the best at resembling Talon’s features and details. Unlike his other skins, he is not wearing any form of covers on his head or face. His eyes are green with sharp marks underneath his eye bags. His hair is short but pointy from the back, having to side bangs being black and the rest of the hair being purple.

If anything, this skin makes him an elegant assassin. Every auto leaves a greenish-cyan effect. His passive consists of three pointy swords that appear around the enemy. His W is absolutely beautiful, sending three swords in a direction, then receiving them back after they spin and turn into a beautiful withered rose.

Every time he uses his E, flower particles are left behind. His ultimate makes Talon spread a bunch of roses around him as he enters stealth. The illusion of a rose underneath him can be briefly seen. His 12 swords then spin as they become beautiful flowers and turn back into sharp swords to strike his target. 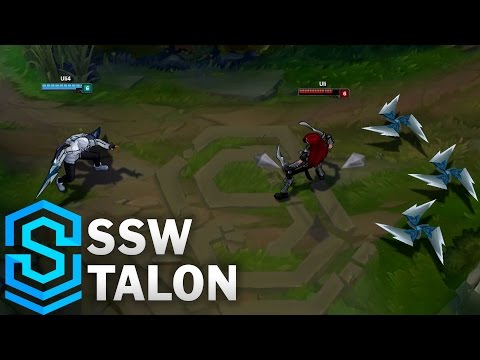 League has one of the biggest, if not the biggest, Esport scenes in history. And we all love Esport content in League; it shows how the company appreciates and honors its players. SSW Talon is to honor PawN’s winning performance during the 2014 World Championship.

The best part about this skin is how Talon looks like an Assassin Creed character; his outfit makes him appear rogue. He is dressed in white and black pants. His blade is silver with a blue hilt. His blades have the same regular shape but with different colors, being both silver and blue as his main blade.

His W sends those blades flying then returning through enemies. His ultimate unleashes all his weapons to expand into blue shurikens. 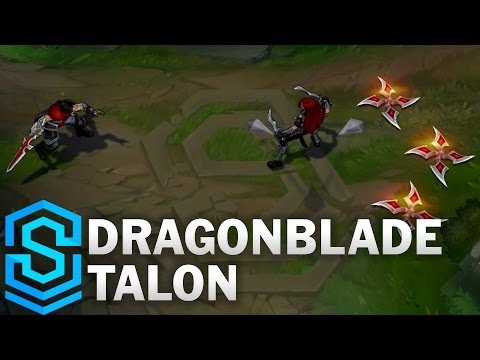 Although this skin is 10 years old, it received some visual updates in 2016. Talon has dark brown hair, long enough to reach his shoulders and the back of his beck. He can be seen wearing a red scarf and a black cloak. His top and bottom look tough as if they were made from leather armor. Talon’s blade has silver edges, but the core is red.

His W sends three flying blades before spinning, during which they start to glow gold, and as they are sent back, they will leave a red trail. His ultimate unleashes a ring of his blades, rotating fast as they gradually become transparent, then coverage to Talon’s location. 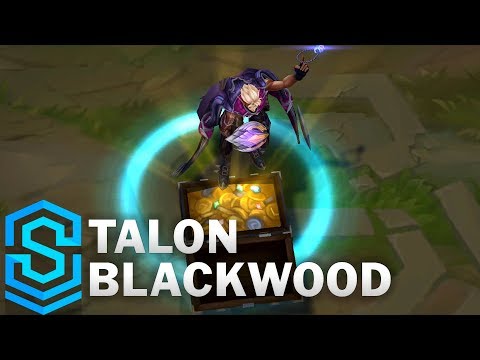 Although it was named that this skin makes Talon look like Ezreal, it is still a Talon skin nonetheless. His hair is blonde and short, and he has no face covering. He is dressed in dark purple outfits, and his body is protected by black leather armor.

Talon’s Q makes him dashes towards an enemy, leaving a purple after image behind. His passive is short daggers that appear on targets hit by Talon’s abilities; they stack up to three times before exploding and dealing overtime damage as purple effects can be seen around them.

The trail Talon leaves behind is glowy and shiny. The blades that expand with his ultimate are purple-colored. 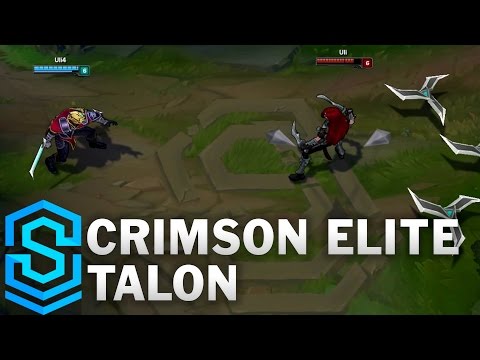 A supervillain or a superhero? Perhaps this skin can be left to your interpretation. Many things are lacking with this skin; not only does it make Talon not look like an assassin, but the particles and effects are nothing new or spectacular. There isn’t any reason for anyone to play with this skin; his classic skin looks much better than this one.

Talon is dressed like a knight with a golden helmet. His auto-attacks and abilities cause red particles to appear, showing the blood of his enemies. Activating his passive will allow the player to hear the heartbeats of the target. 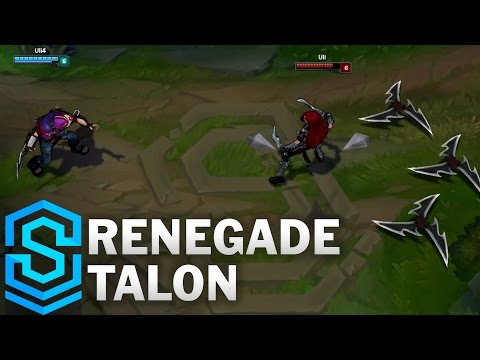 A strange design and an ugly one for League’s standards. Compared to all his other skins, this one is just outdated and not worth it at all. However, if you would still like to have a change of outfit for Talon, you can buy this skin; it is cheap and only costs 520 RP.

Talon has a purple hoodie; his hand has a wrist sword attached. His shoulders have badges with a red star on them. He can be seen wearing jeans and black boots. His W sends flying silver blades that expand into black shurikens.