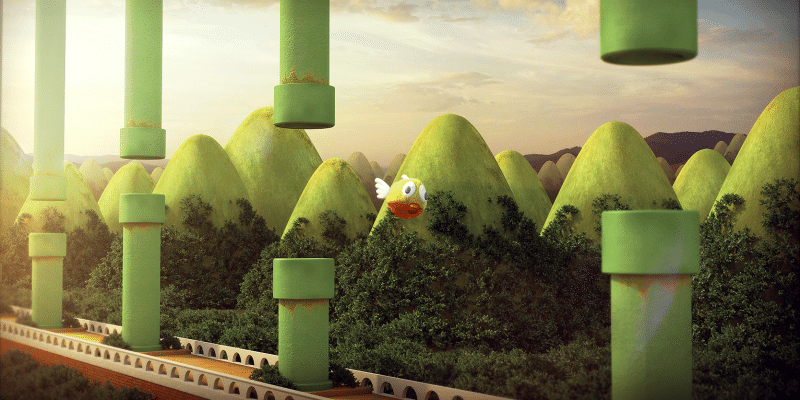 But why is this dead simple game so successful?

In this article we need to discuss two things. First, how did the game manage to climb both Apple and Google charts with speed of light with literally zero marketing budget and only a basic App Store Optimization strategy. Second, what makes it so addictive that people are willing to play it, stick with it and at the end of the day eventually click on ad banners which are the only monetization mechanism inside the game.

How did Flappy Bird reach the #1?

Flappy Bird is not a new game. It was submitted into the Apple App Store in May 2013 and for the next six months it had almost no downloads at all. Suddenly, at the beginning of December 2013 it stormed up the charts, reaching the #1 spot in the US in January. In this case, the US market was responsible for setting up a trend which eventually led to several follow-up events in Europe responsible for wide adoption of the game. As you can see in the picture below (source: AppAnnie), all the main European markets discovered the game almost simultaneously in late January.

Many people associated Flappy Bird’s success with famous YouTube reviewer PewDiePiewho made a video about the game with over 7 million views. However, PewDiePie was actually a little bit late to party since he published his video on 27th of January. This doesn’t mean he had no impact on the game’s growth. He did a great job promoting the game and he is one of the reasons Flappy Bird had such success in major European markets at the end of the January.

But one needs to mention two other events that helped the game and happened at the same time as PewDiePie’s review. As shown in the screenshot below, you can notice that TouchArcade published theirs first article about Flappy Bird and popular Twitter accountTheFunnyVines with 1,2M followers tweeted about the game. These events clearly improved the game’s visibility and with PewDiePie’s video led to massive adoption in Europe.

And just to confirm my theory, below is a screenshot from Google Trends clearly showing a search peak starting at the same time. What’s interesting is the fact that there was almost no search activity before January 15th. Also, there is no evidence of major news coverage or social media attention in December 2013 which leads me to the conclusion that initial growth in US was purely organic and had no certain starting source. This could also explain a kinda chaotic up-and-down curve in the US as you can see in the very first chart from AppAnnie.

Well, word of mouth is one hell of a powerful marketing tool.

What Makes Flappy Bird So Addictive?

Many people end up disappointed after seeing the game for the very first time. But somehow they start to like it after a few tries even though it’s a complete torture and test of your patience. Flappy Bird is definitely a new kind of Stockholm syndrome.

There are various reasons for Flappy Bird’s success and wide adoption but basically we can merge them into two groups – emotional and rational.

Emotional reasons start with nostalgic graphics. Flappy Bird with its 8-bit graphics, green pipes and clumsy little bird is just too damn cute to be overlooked. Similarity with Super Mario makes the game look much more familiar since the very first game session which allows to create initial psychological connection much more easier.

Competitive aspect of the game is very strong as well. It’s not only the reason why people are torturing themselves over and over again but personally I think that this competition was also the first ignition during the word of mouth growth phase in the US. It’s very easy to compare your score with your friends since there are no coins, levels, frags or any other sort of complicated score mechanism. It’s just a beauty of one simple number saying how many pipes you went through. Also, an implementation of the Game Center helps a lot.

Flappy Bird uses popular “easy to learn, hard to master” model of gameplay. Everyone understands the game but most people are capable of scoring up to 10-15 points. There is a huge challenge for those who want to improve their skill but all they need to do is practice, no strings attached at all.

The game is just really hard and people want to prove themselves they can do it. Challenging games are slowly becoming a new trend as people are getting bored of casual candies and bubbles. We had a widely popular Super Hexagon and now there is Flappy Bird. What will be next?

Flappy Bird is dead simple. Dong Nguyen actually simplified something, that was already dead simple. The genre of endless runners is well-known and really popular nowadays, however Dong managed to cut off every redundant game mechanic, leaving us with an essential objective of surviving as long as possible with that really simple one-touch control.

Rational reasons start with the absence of in-app purchases which in this case is a huge advantage – because the game is actually free to play. Usually, there is an invisible psychological anchor in the majority of endless runners which basically says: “Either you will play this game A LOT so you can earn enough points/coins for upgrades… or you can pay.” However, there is no such thing in Flappy Bird. Players are not bounded with in-game economy, they don’t even have to think about it because there is none. However, people are subconsciously comparing things all the time and Flappy Bird is an unambiguous winner in terms of free-to-play restrictions.

Time distribution and average length of game session is the key for Flappy Bird’s popularity. Below is a photo I took during a Google’s presentation at one recent conference. It shows results of a study performed by Google and Parks Associates regarding spare time and usage of smartphones. Basically, if a person has 5 minutes of free time he or she usually interacts with social networks on theirs mobile phone. As much as 80% of people are refusing to play games if they have only 5 minutes free because even a casual titles as Candy Crush Saga or Angry Birds require more time for the game session. However, Flappy Bird is completely different. You can grab it, play it for one or two minutes and then turn it off in rage, repeating this process many times per day.

Regarding monetization, the game is doing very well for one guy production. We can’t compare it with top grossing companies like Supercell which is making $4-6 million per day, however for a few days of work this is a true dream for all indie developers. $50,000 per day from ads is just insane. Banners are very well placed and what’s important – they do not bother you during the gameplay.

There are few tweaks I would personally do – like adding a simple IAP which would remove ads. In the last update Dong added a retry button and some cosmetic changes like a night theme, coloured birds and improved UI. I would definitely try to implement service as Chartboost or RevMob instead of current AdWords because of higher pay-offs and more relevant offers.

Last but not least, Flappy Bird had a decent amount of luck. Its success was combination of coincidence and reasons I mentioned above. There will be plenty of copycats trying to reproduce its indie success story with no marketing budget, but it won’t probably work. Unless you will come up with another unique mixture of catchy game and little bit of luck.

Update: Flappy’s developer announced he is shutting the game down. Dong claims he just can’t take it anymore and it’s not anything related to legal issues. Whatever the true reason is, this will bring him more downloads and media attention than a worldwide feature by Apple.

21 Marketing Trends for 2021 – Will you try them all?
The Ultimate Guide To App Store Optimization (2021 Updated)
The Story of TrainStation: How We Got 2 Million Downloads 6
Top 15 MP3 Converter Apps for Android in 2021
Mind-Blowing Mobile Game Development Facts You Need To Know
16 Best Weather Apps for iPhone in 2021
How To Master Google Play Search Optimization
Secrets Behind The Clash of Clans Monetization