10 Best Darius Skins In League Of Legends [ALL Ranked]

The hand of Noxus – Darius, is the best warrior out there to resemble the powerful nation of Noxus which is known for its invasions against other countries and its lust for power.

Darius originally came from a nameless house. His strength allowed him to climb the ladder and become a commander in Noxus. Darius is very intimidating and brave. He has great faith in his cause and never hesitates, making him one of the most fearsome commanders in Runeterra.

Darius is a Top Laner in League of Legends. Classified as a Juggernaut, Darius seeks to close the distance between him and his enemies. He can withstand a large amount of damage while also dealing heavy damage as well. He can heal himself with his Q, slow down enemies with his W, Pull them with his E, then finish them off with his R if they don’t bleed to death first.

Riot has released 10 skins for Darius; here are the best skins for him. 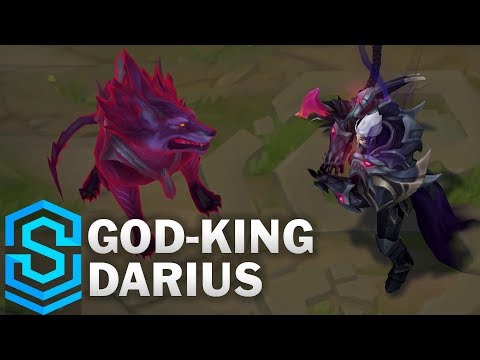 God-King is a title fitting for a champion like Darius. His heavy-edged armor and long sharp ax make him a terrifying fighter. He can be seen in white hair, accompanied by a large dark wolf. His passive is Hemorrhage, and it stacks around the enemy up to five times. Those stacks are shaped as dark and corrupted blood drops.

Darius decimates his opponents with his Q, spinning his ax fast enough to leave a dark trail. His W is an auto-attack that slows enemies. Whenever it hits an enemy, it leaves a sound cue of a Wolf, howling for everyone to hear.

His E lunges Darius one step forward and pulls all enemies with his ax. Lastly is his R; Darius jumps in the air and strikes down his opponent, leaving a satisfying war cry. 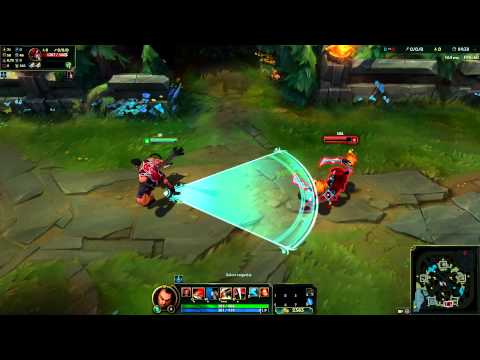 Darius is a basketball player, a mighty one. Dunkmaster Darius is wearing Noxus sports clothes which are red aesthetics. His right arm is tattooed, and his power is great enough to set the basketball on fire. Dunkmaster is an iconic League skin; Darius walks and drips the basketball while holding a large backboard-ax as a weapon.

His passive leaves were flaming basketballs around his opponents. His Q allows him to spin with the backboard, healing from all enemies damaged by the outer radius. His W sets the backboard on fire and slows down enemies hit by it.

Enemies can be pulled to Darius with his E, using the large backboard-ax. Every time his passive is fully stacked, a loud whistle can be heard, empowering Darius. His R gets Darius to dunk a basketball on top of his enemies. 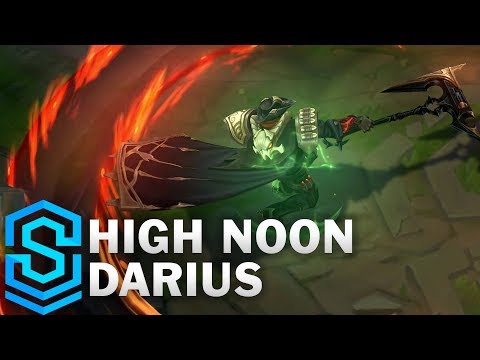 Darius is dressed as a western outlaw, wearing a cowboy hat and armed with bullets on his shoulder. His mouth is covered by a red scarf. Darius’s Hemorrhage is replaced with bullets! They stack and float around his enemies; once fully stacked, a skull sigil appears above them. His Q almost sounds like a whip slaying an enemy.

Darius spins his black ax to create a trail of black radius around him. His W empowers his ax, causing the metal to heat up. If Darius hits an enemy, they get slowed, and a cue sound of a bullet will play out.

His E is like a whip, pulling all enemies closer if in range. His R makes Darius jump in the air and strike down enemies with his ax, leaving a satanic sign under his target. 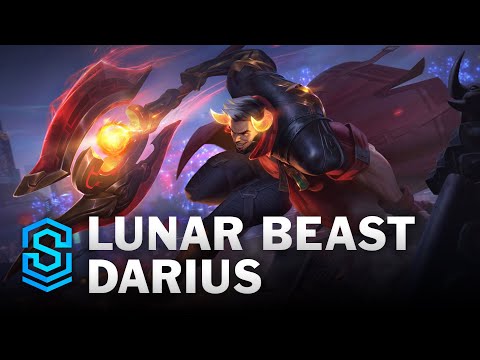 Lunar Beast makes Darius look different and perhaps less evil than his other skins. Orange horns empowered by the Lunar year are coming off the side of Dariu’s head, representing an ox. Darius’s passive is replaced with Chinese Lunar lanterns.

Once fully stacked, an image of an ox appears above their heads. Darius spins his lunar-empowered ax with his Q, leaving a red trail behind. His W empowers the lunar crystal carved in his ax to deal bonus damage.

Darius will attempt to catch his enemies with his E, pulling them against him and knocking them to the air before making his final move and striking them with his R – Darius jumps in the air and strikes his ax into his opponent. The power of the strike can be seen on the ground, shaping the image of an ox. 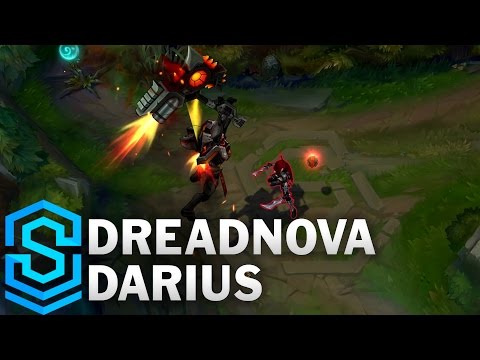 Dreadnova Darius is all about the future. This skin’s rarity is mythic and can only be bought with Gemstones. Darius has boosted his strength with a mecha-suit. His ax and all parts of his body are now strengthened by a loud engine. Darius carries his chainsaw-like ax and attacks his enemies, causing a bleeding stack around them.

The stack appears as a metal sphere with a core inside. Once fully stacked, a red aura is shown around Darius, and his body engine loudly starts to run. His Q spins his ax, hitting multiple enemies at once and healing him from the damage done.

His W gets his chainsaw ax going for more damage. His E pulls all targets into his hard solid body. His ultimate guillotine is a single target strike, cueing an alarm once hit. 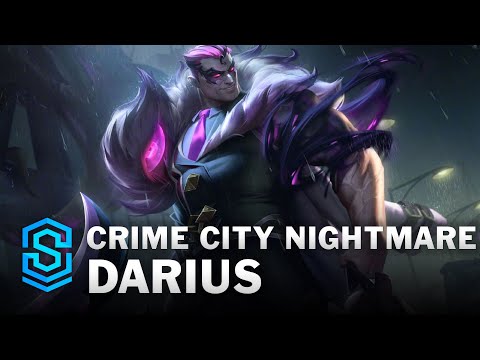 Darius leads all city crimes with his demonic power. He can be seen wearing a white fur coat around his shoulders over a black suit. His hair is purple, and his eyes are corrupted by his new powers. Darius attacks his enemies with his black ax, which is also corrupted.

His passive creates widely open evil eyes that float around his enemies. Those eyes are purple and match his aesthetics. Darius spins his ax with his Q in a fast manner; all enemies hit heals Darius for a small portion. His W creates a sparkling dark aura around his hands, empowering his next attack.

His E is a simple pull that knocks enemies to the air momentarily. Darius unleashes all his demonic power with his R striking his target with all his might. 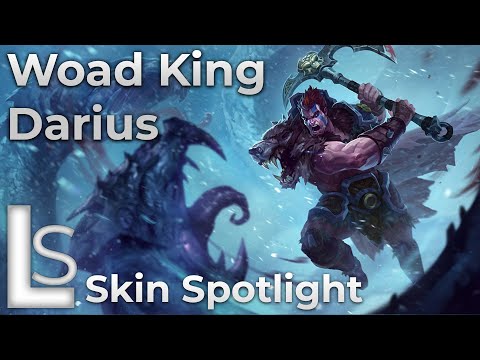 This skin makes Darius appear as a fighter from the north, mainly a Scottish one. His armor consists of small pieces covering parts of his body while leaving the rest naked and exposed to the cold winter. However, Darius demonstrates his strength that way.

He had also put the skin of a bear around his neck. Darius fights like a brave warrior from the north. His bleeding passive is his normal red blood that appears around enemies he has damaged. However, his attacks are now infused with winter power as blue particles appear with every strike.

His Q is a spin, causing his ax to hit all enemies around him, freezing the wind in the process. His W freezes his ax and passes it on to the next target. His E pulls all enemies in range towards his muscular body. His R breaks both the ice and his foe with his guillotine strike. 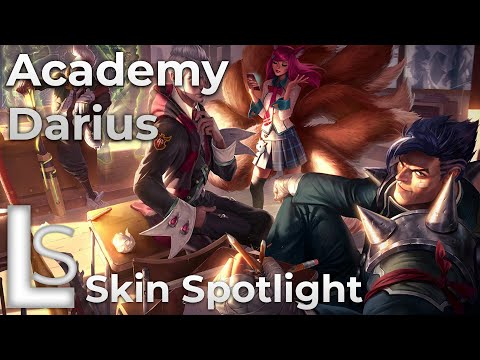 Darius is an Academy student alongside Ahir, Vlad, and Ekko. His hair is comped in a very stylish way, and his clothes are just the formal student outfits but with a twist. There is a large spiky piece of armor on his shoulder. Ever wondered what Darius looked like if he was twenty years younger and in high school? Well, now you can.

His bleeding animation is still the same; his passive bleeds enemies with each stack increase Darius’s power. His Q spins his ax around him, hitting multiple enemies if present and healing himself if they are by the outer edge. His W empowers the next attack, canceling auto-attack animation too.

His E knocks his opponent to the air after being pulled by his mighty ax. Darius finishes off the battle with his ultimate move, striking his edged weapon ax from above. 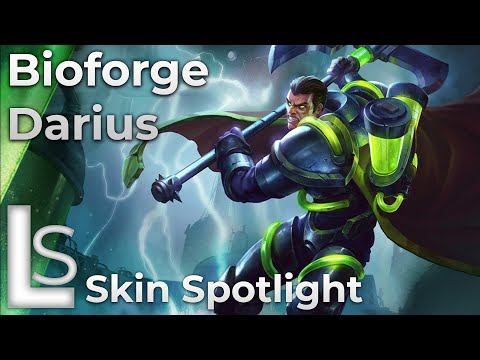 Darius seems like he arrived from the city of chemtech, Zaun. His body is fueled with green liquid and probably empowered by it as well. Bioforge Darius has pure green eyes that are always glaring. His usual armor, which he would wear as a Noxuian, is now infused with pipes that contain green liquid. His ax also seems to be empowered by that.

When it comes to combat, Darius uses his ax to cut down enemies, making them bleed with his passive. His Q spins his ax and leaves behind chemical particles. His W makes this chemical flow through his right hand, causing his next attack to slow down enemies.

His E is just the usual animation with no big changes; his ultimate, however, launches himself to the air and strikes down his foe, causing a chemical explosion with a satisfying sound cue. 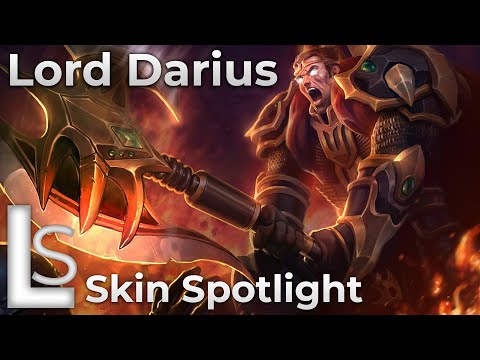 In these skins, Darius is presented as a Lord. He is protected with golden and black armor. His ax is crafted majestically to show off his grace and his strength. A golden crown is also put on his head while his eyes are enraged with a white aura. Lord Darius is the least favored skin. It doesn’t apply many changes in terms of particles or animation.

However, some Darius mains love the aesthetics of this skin. His grace causes his foes to bleed in battle with his passive. His Q takes down multiple enemies in an area by swinging his golden ax. His W empowers his next auto attack causing the target hit to be slowed. His Ultimate is his royal Gulittone. Darius executes his enemies with his R.

15 Games Like Summertime Saga in Jan 2023
How to Get FREE Robux Without Verifying (Jan 2023)
5 Best Tank in Mobile Legends That Truly Carry The Team
How To Change Tick Speed In Minecraft [Jan 2023]
How to Make Paths in Animal Crossing: New Horizons (Step Guide)
Gaming History: Games That Changed the Industry
5 Most Popular Games on Alexa
Best 25 Roguelike Games Like Hades [2023 List]