The Prodigal Explorer – Ezreal, is a treasure finder who always seems to bring trouble wherever he goes. However, Ezreal overcomes difficult situations with his bravery and luck.

In League of Legends, Ezreal is a marksman known as an Attack Damage Carry. His main goal is to deal as much damage as possible while remaining alive for the longest possible time, as he is squishy and can be easily killed by other dangerous champions. But unlike other marksmen, Ezreal can blink a short distance to engage on his target or to escape, making him a very mobile champ.

Wearing the Shuirman gauntlet, which originally belonged to one of the Shurmian ascended, he is capable of firing powerful magical blasts to save himself in many dire situations throughout his various adventurers. Ezreal seeks to find ancient treasures, risking many things to obtain them.

There are 15 skins made by Riot since his release, here are his best skins! 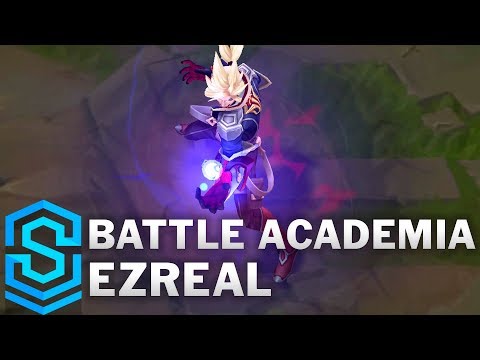 A Legendary skin that definitely deserves to be on top of the list. Ezreal is a student in a battle academy school. His hair color is lighter, spikier, and longer than his original hair; it is also a short ponytail. His outfits are aesthetically red and black.

His abilities colorfully match his appearance; his normal attacks fire small red bolts, leaving red circles as particles upon impact, similarly with his Q. When Ezreal maxes his stacks, he empowers himself, his hair starts floating up, and his skin turns slightly red. His ultimate shape also changes as his R levels up. 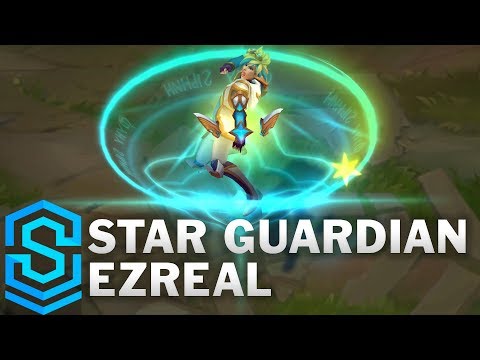 His Q fires sparkling stars as Arcane blasts, leaving a beautiful trail behind with each shot. His W appears like a galaxy with one big star at the center. His Ultimate turns his Arcane wave shot into a bird-like creature that leaves little stars behind his path. 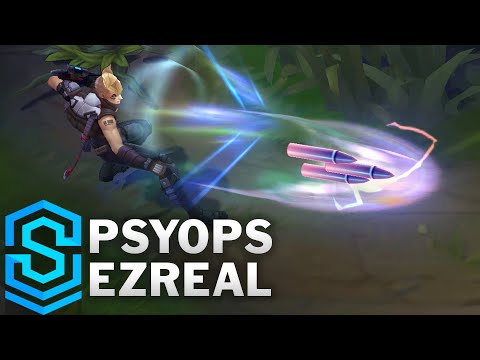 The Psyops skins take skin effects to a whole new different level. Psyops Ezreal’s appearance as resistance from a futuristic timeline. His hair looks much better and sharper than before, still having the same blonde color. Basically a neat look overall. Psyops skins stand out for their Glitch effects.

Ezreal attacks output RGB glitch effects; his Q attacks leave a trail of RGB while the shot itself consists of 3 dark bullets. His E makes Ezreal blink, making his character model Glitch and leaving a faded image to his initial blinking point. 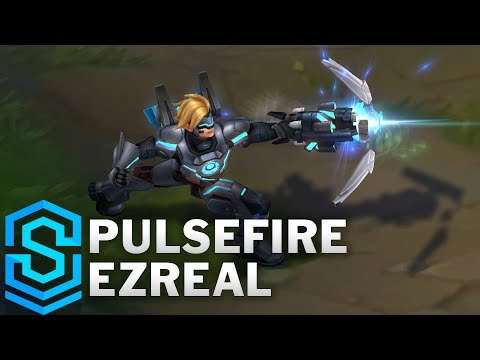 There are six Ultimate skins in League of Legends, and Pulsfire Ezreal is one of them. Those skins are extremely rare, expensive, and high quality compared to all other League Skins. However, Pulsfire Ezreal was made in 2012, so it is slightly outdated, but it still does compete with other skins.

Unfortunately, the price is very high. Ezreal attacks are small blue laser shots; his Q is an Arcane blast of blue energy. Each time Ezreal levels up his ultimate, he transforms and becomes more robotic-like; not only that, but his shot effects also change, his Q blasts increase in size, his W changes color. The best part about this skin is the excessive voice lines and funny interactions. 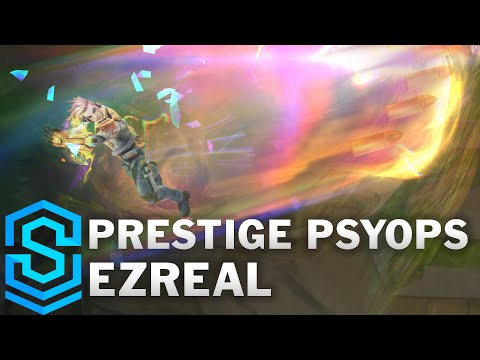 Prestige Psyops takes the skin to a new golden level; Ezreal looks much more fancy and expensive. He almost appears to be wearing a white suit with golden accessories. His abilities’ effects are now highlighted with gold while keeping the Glitch and a bit of RBG here and there.

The sound effects have remained the same as the original Psyops Ezreal. Depending on players’ preferences, they might enjoy the golden bright colors of this Prestige Edition more than the original one, but that alone isn’t enough to top Psyops Ezreal. 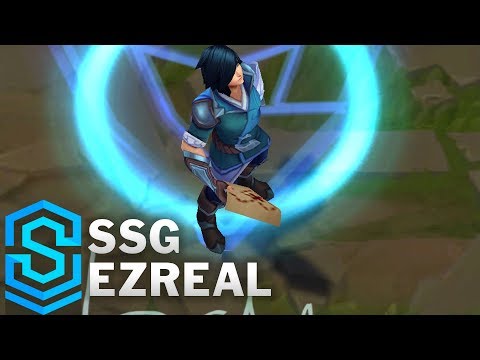 SSG is an Esport Team that has won the 2017 World Championship. Haru, one of SSG’s players, has picked Ezreal as his signature pick, thus creating SSG Ezreal skin. If you’re an SSG fan, you would definitely want to buy this skin; Ezreal’s recall consists of Haru’s signature to highlight his performance.

Starting with the new changes, Ezreal has black hair, which is very uncommon compared to his while skin line. He is dressed in blue to match the aesthetics of SSG’s team icon. His abilities are oddly satisfying; they are all blue-colored, leaving a fading smoke effect. 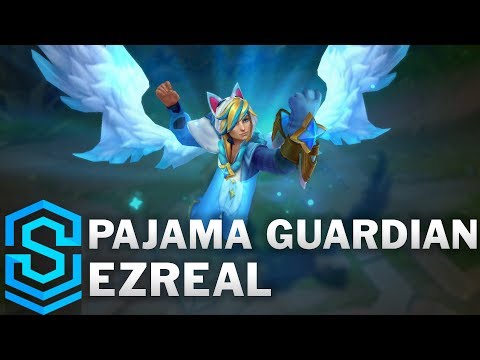 The Star Guardian Ezreal is having a sleepover with his Star Guardian team! So he is dressed in a Onesie that symbols his guardian companion. His abilities and effects are arguably the same as his Star Guardian skin. His Auto attacks shoot small stars leaving a trail of the rainbow, except that it is mostly blue.

Other than that, this skin is not rich with new content compared to Star Guardian Ezreal. However, if players prefer to have Ezreal dress in adorable sleeping wear, this skin could top the original Star Guardian skin. 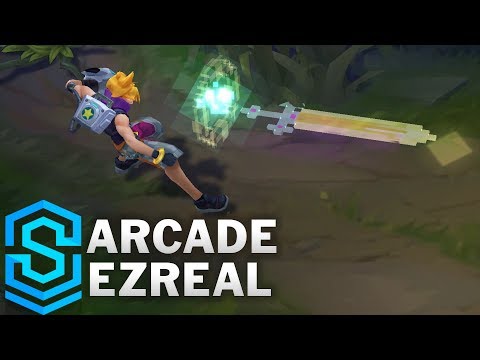 Arcade Ezreal is a skin meant to be set in the Arcade world, full of games. His recall is him beating an arcade dragon, and after he slays the dragon, the teleportation sequence is completed. His Q is a pixelated version of his original attack, and when it hits an enemy, it expands in a small pixelated explosion.

His W is a golden arcade sword that he sends hurtling at his opponents. This also sets off a small explosion upon hit. His E is a purple sphere he shoots at people, and they have purple pixels surrounding them. When he uses his ultimate, he summons a sword from his arcade glove and sends out a wave of pixels that can go through multiple enemies. 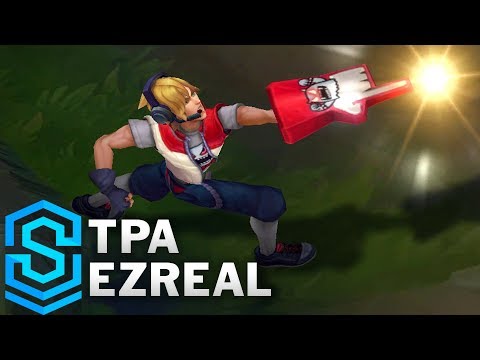 TPA Ezreal comes from the eSports team Taipei Assassins. His attacks go through his foam glove, and they don’t look very different from the original attacks, some slight color changes in that the colors look a tiny bit more vibrant. His ultimate is slightly different in that it doesn’t form what looks like a bow rather it forms a ball of light before it shoots out in the same way as the original. 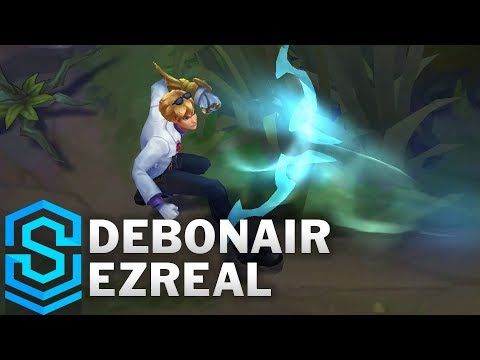 Debonair Ezreal is on Nox Vegas flaunting his looks in his fine suit with a white jacket with a charming red rose on the jacket collar, a purple shirt and vest with a black tie, and black pants. And he knows he looks good. The debonair line takes place in the same world as Crime City and Crime City Nightmare. 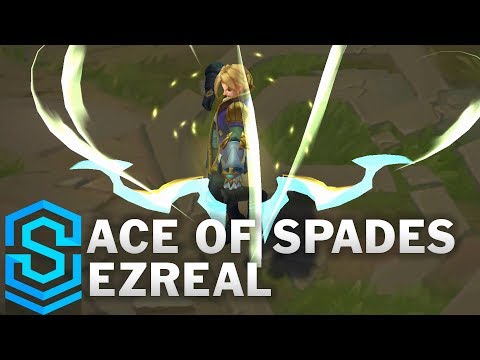 Ace of Spades Ezreal is from the High Stakes Card Theme, and he’s dressed smartly in a navy blue jacket with gold trim, which matches his hair. On the back of the jacket, he has a golden Ace of Spades symbol, which denotes his place in the Card theme.

His usual golden glove has been replaced with a silver glove with a glowing dark blue Ace of Spades symbol placed on the back of his hand. 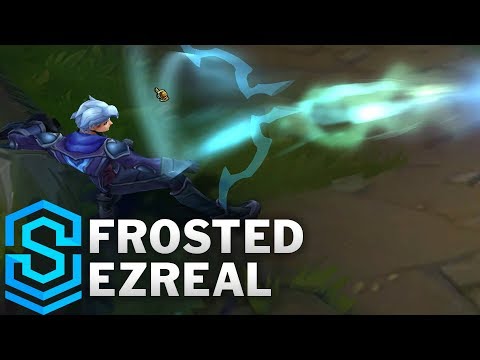 Frosted Ezreal features a new look. Instead of golden hair, his hair is a light blue though it is as unruly as it always is. And his clothing colors are black and blue, with bits of silver around his shoulder armor. His golden glove has also been made black with a blue glowing centerpiece placed on the back of the glove.

Though this skin does not include any new animations for his recall nor any of his abilities, nor does he have any color changes to his abilities. 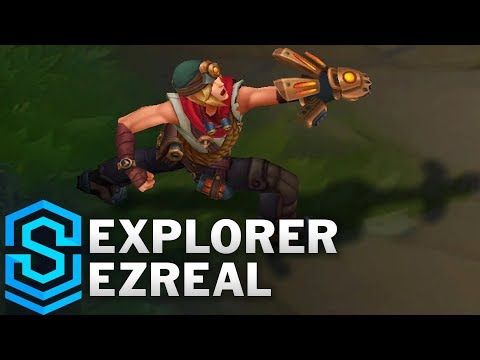 Explorer Ezreal has had a major costume overhaul with completely new colors and a new design. Ezreal is ready to brave any tomb or temple he comes across; he wears a mining helmet with an inbuilt light at the front, he has goggles hanging around his neck, ready to be used when he kicks up dust during his explorations.

His main outfit is dark pants that look like thick leather ones to protect him when he’s crawling through narrow areas with big boots to protect his feet. His torso is decked out with a white short-sleeved shirt over it. He has suspenders and a big belt with pouches to carry things.

He also has some rope slung across his torso and a big red cloth around his shoulders that could work to keep dust out. 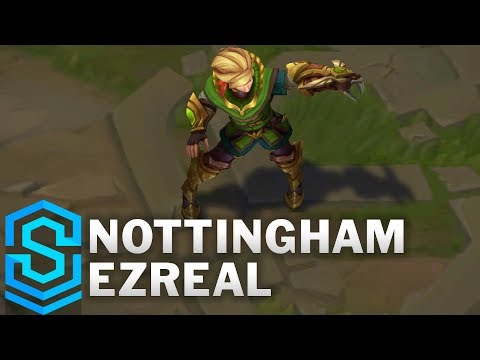 Ezreal’s Nottingham skin is the answer to his look like an elven archer. His hair is golden as usual, but with an added braid and attached feathers on his right side. He is decked out in leaf greens, both light and dark, with gold accents and tall, dark golden boots to blend in better with the foliage.

His ears are, of course, pointy as is expected of the elven archer. His glove features a clear golden crescent that makes it look like a small crossbow mounted there. On top of it sits a green orb which accentuates his clothing nicely. This skin does not include any new animations for his attacks or recall. 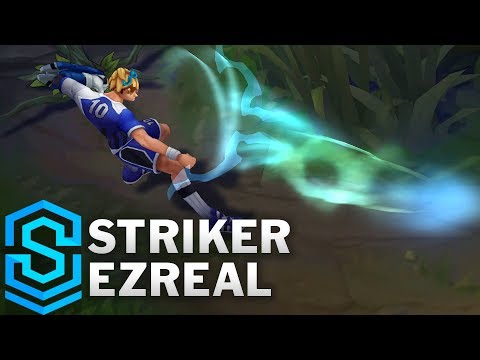 In the Soccer Cup universe, which is set in football, Ezreal is an upcoming striker and is the most popular player of Order United’. The skin was originally released in 2010 and has since received a rework. Now Ezreal can be seen wearing his customary goggles on the top of his head, his hair shorn down on the sides and in the back.

While he’s decked out in his blue and white soccer uniform for Order United with blue shoes and white socks that stop under the knee, he wears jersey number 10, as can be seen on his blue shorts and the back of his shirt. His blue, white, and black goalie glove with a blue and white attachment that goes up to his elbow.

23 Best Roblox Games In 2023 That Are Fun To Play
10+ Zombie Games for Xbox One to Bite Into Right Now!
600+ Roblox Usernames 2023: Cool, Cute, Rare, Funny & Aesthetic
Best Jinx Skins in League of Legends: The Ultimate Ranking
30 Best Mobile Multiplayer Games to Play With Friends
19 Best Geoguessr Alternatives: Travel the World in Browser
How to Make Balloons in Minecraft (Jan 2023)
How to Make a Beacon in Minecraft (2023 Guide)