The 10 Best Lucian Skins in League of Legends

Lucian is a great marksman that brings fun to every game you play with him. His popularity among the fans made it necessary for Riot Games to develop many skins for him. Irrespective of what skin you choose, you’ll enjoy your gameplay. We are here to help you find the best Lucian skin that will suit your needs in terms of price abilities and other fascinating features.

Lucian is the most popular, aggressive, and highly mobile marksman in the League of Legends. Lucian has everything that players look for in character with his risk-taking play, assassin traits, and Lights-linger passiveness. Therefore, whether you are a Lucian main or recently found the Purifier, you will want to play with a stylish Lucian.

Apart from being the fan’s favorite, Lucian has many different skins that you’ll love. To help you find the perfect one to add to your collection, we have put together some of the best Lucian Skins in the League of Legends. Read and compare all the skins in this review and choose those that suit you best. Read on for the details….. 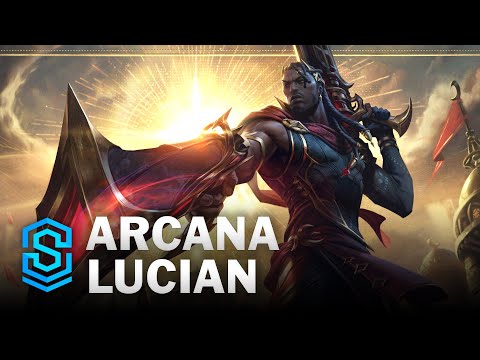 Arcana Lucian is the most recent and, so far, the most spectacular and thrilling skin. Lucian has a total makeover, giving you a great gaming experience. The skin comes with a great color scheme with Lucian and his abilities in a bright red color with golden touches. The skin offers mind-blowing animations and spectacular guns.

Compared to the other skins, the Arcana Lucian makes his Q animations faster and the W hitbox larger. The R motion and background animation are just on another level. However, the sound effects are rather mechanical and not very exciting.

Even so, playing with Arcana Lucian gives you an advantage with its best-looking animations and features. For only 1350 RP, Arcana Lucian is one skin you need to try out. 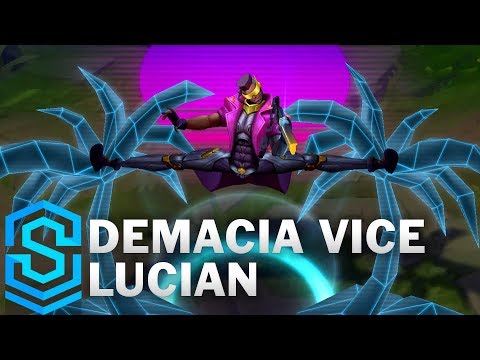 Demacia Vice Lucian can never miss when talking about the best Lucian sins in League of Legends. The skin offers great colors, with Lucian looking partly human and partly like a machine detective. It has top-notch animations to add to its vibrant color scheme. When in the Demacia Vice Lucian skin, his background, E, and recall animations are the best. The tiny arrows will give you a deviation from the standard gameplay.

To add to the standard W animation, Demacia Vice Lucian’s skin has an orange effect when hitting an opponent. You will also enjoy the updated sound effects and dark pink abilities with yellow accents. This skin’s magnificence depends on the player’s taste. 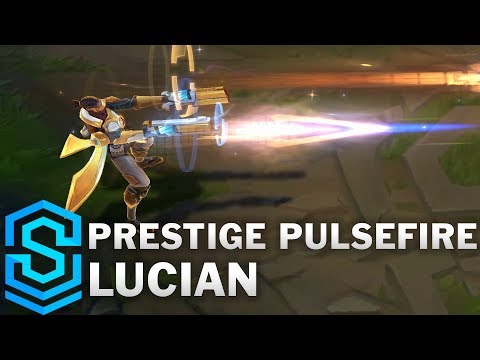 However, the skin keeps most of the standard version features. Playing with this skin makes you feel like a natural galaxy protector. It gives you modern-day gameplay with its updated animations and general setting. Therefore, if you are looking for skin that brings new life to the champion, you should try the Prestige Pulsefire Lucian skin. 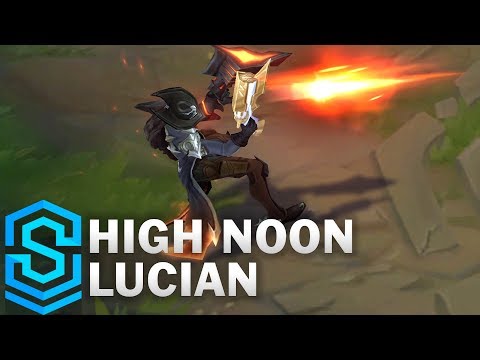 Its animation effects are top class. When auto-attacking, your weapons spin around, and, as if that was not enough, you drop into a cartoonish tomb after you die. You will have an accurate hitbox making it easier to deliver your attacks precisely. This skin is worth its price, and as a Lucian main, it will always be your first choice with its incredible design and unique animations. 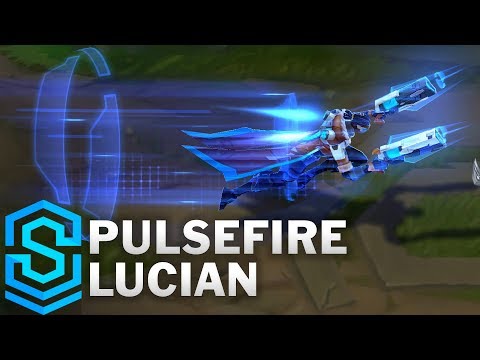 Pulsefire Lucian is a skin that gives you something completely different from usual. Its blue theme, futuristic concept, better visuals, the elevation of the character’s abilities make it worth reckoning. Lucian’s abilities are blue with an orange accent. In addition to that, the visuals and sound effects are metallic and more futuristic. Its new animations are heaven-made, with the Q animation, in particular, being the best.

Everything about the skin makes it unique in its way. Therefore, if you would like a complete transformation of your character, the Pulsefire Lucian skin is here for you. For a price of 1350 RP, this LoL skin is definitely worth your time and money. 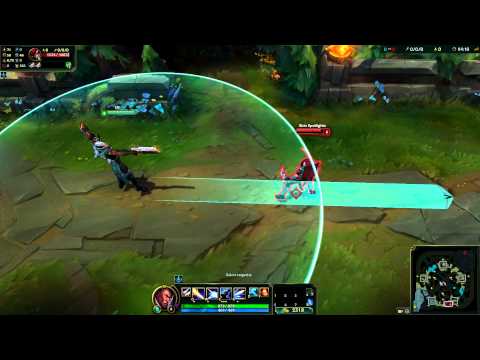 Project Lucian is another players’ favorite skin. Its simplicity, bright orange theme, and technological visuals might be what you’re looking for. Your character will have a great physical appearance coupled with great animations that make him easy to use. However, the animations are not that interesting compared to the other skins. But the robotic and hi-tech vibe in the animations adds to the skin’s unrivaled uniqueness.

This skin gives Lucian a fantastic look and has metallic sound effects and a voice filter. It would help if you remembered that this skin’s value depends on a player’s taste. If you are a Project Lucian skin enthusiast, you’ll argue that it’s among the best futuristic-themed skins. It’s great when looking for the wow factor in older Lucian skins. 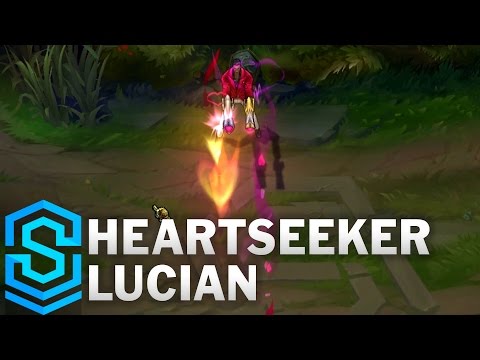 You are dressed in an outstanding red and white outfit which makes you look spiffy. In this skin, Lucian has new heart-like animations. Your bright pink glowing attacks combined with fascinating sound effects make the Heartseeker Lucian skin worth investing in. To emphasize the love theme, your weapons have heart-shaped muzzles, and instead of the Culling’s bullet, you’ll have hearts. When using the Ardent Blaze, rose petals fall around Lucian.

The Heartseeker Lucian skin does not bring much other than new animations, especially the pleasant recall animation. You will notice that a heart forms around the area of his W. This skin would have offered much more, but Riot Games disappointed players on this one. However, the skin is still a great choice because of its high-quality aesthetics. For 1350 RP, Heartseeker Lucian is worth giving a try. 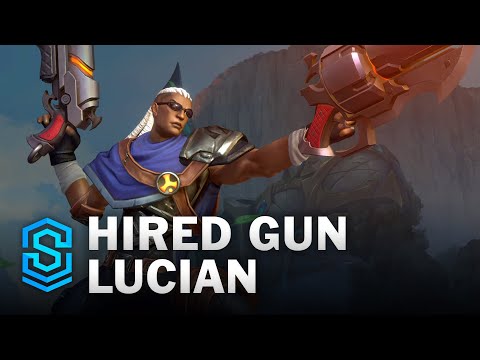 Irrespective of its old age, Hired Gun Lucian is a decent skin. This skin adds a unique flavor to his character. He has deadly weapons and wears shades and spots bleached hair that completes his badass demeanor.

However, the skin’s animations are not that significant, and it generally looks clunky. This makes Lucian’s attacks somewhat difficult and less coordinated during gameplay.

If you’ve been a Lucian main from the beginning, you will have a strong connection with this skin. 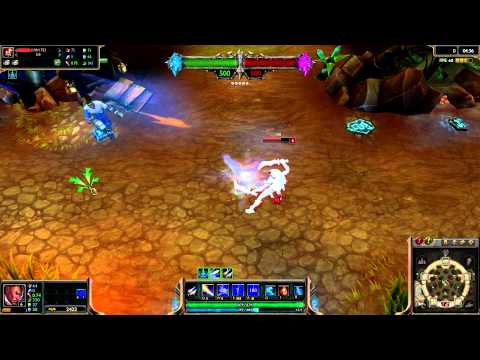 The Striker Lucian skin showcases him as a soccer player alongside other champions. The soccer kit gives him a different look from the base skin. The design and development of this Lucian skin draw inspiration from the Soccer World Cup in Brazil. The skin is, to a large extent, built around the character of a Dutch soccer legend called Edgar Davis. 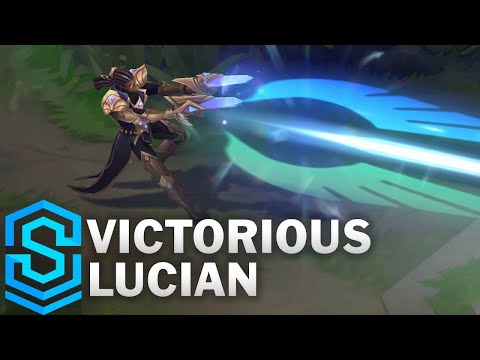 This skin has caused controversy among players, some terming it a disappointment. However, since the skin is free, it’s not as bad as some players imagine. You will get it as a rank reward, and its theme is not as unique as you would have expected. With this skin, Lucian has sharper visuals and significant effects. His body armor is golden yellow, and his abilities have been remodeled to look much brighter. This skin makes Lucian look like a real warrior ready for battle.

The animations have been slightly modified with the auto-attack animation well-timed. Even though the skin has nothing ordinary, it still gives that feeling of playing with a new Lucian. And considering that it’s free, Victorious Lucian is worth trying out.

How to Get Sponges in Minecraft [Jan 2023]
How to Make a Jukebox in Minecraft (Steps with Pictures)
50 Best Nintendo Switch Games You Can Play Right Now
Top 10 Games Like Overwatch You Should Play in 2023
Best 25 Roguelike Games Like Hades [2023 List]
How to Find Carrots in Minecraft (All Versions 2023)
How to Get Wheat in Animal Crossing: New Horizons [2023 Guide]
How to Fix Xbox Party Chat Not Working [2023]