How to Light TNT in Minecraft [6 Ways]

Minecraft provides players with different destructive items that they can use to inflict significant damage to the in-game world of the game. One of the most common basic explosion-related items is TNT.

TNT is a craftable block in Minecraft that can explode and destroy other blocks and entities when ignited. It can be used for excavating several blocks at a time or as a trap for mobs and other players. Technically, TNT explodes for four seconds, helping you maximize the damage caused. 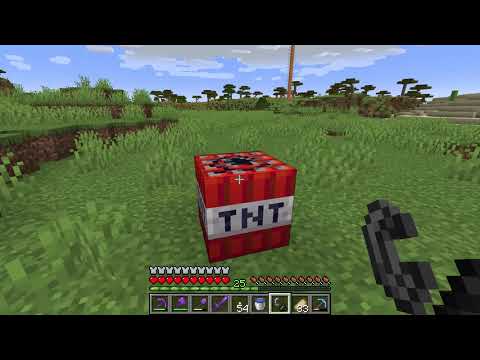 TNT is among the most straightforward items to craft or obtain in Minecraft. All you need is sand and gunpowder, which can be found in the Desert Temple, Woodland Mansion, Buried Treasure, or Shipwreck. However, after crafting a TNT, you might have difficulty activating it. What you don’t know is that there are different ways of using a TNT. This article will look at how you can light a TNT in Minecraft.

Lighting a TNT in Minecraft is pretty simple. However, it can be a little tricky at first, but once you grasp it, you should have no difficulty using a TNT. You should keep in mind that TNT blocks are only affected by items related to fire or Redstone. Therefore, you can use any item that causes fire or emits an active Redstone signal to activate a TNT.

Here are the different ways you can ignite TNT in Minecraft.

Step 2: Right-click on the TNT

Step 3: You’ll have a short period to get outside its explosion radius

Step 4: After the explosion, it will create a home in the ground and damage any surrounding living things.

A Fire Charge is an item that can start a fire on any block even if it’s not flammable. You can also throw them from a distance allowing you to get away from the explosion. However, fire charges are not as efficient as Flint and Steel because you’ll lose charge after throwing them.

To create a fire charge, place charcoal in the center of the grid, a blaze powder to the left, and gunpowder below it. When fired from a dispenser or by hand, fire charges can activate a TNT.

Step 1: You can throw the fire charge by selecting it in your inventory and then using it.

Step 2: Alternatively, you can put a fire charge in a dispenser, which will cause it to shoot out as a fireball when triggered. The challenge is that fireballs shoot at random angles, making them difficult to use for TNT.

Lighting TNT using a Flaming arrow allows you to get as far as possible. You can get a Flaming arrow by using a bow enchanted with the Flame Enchantment. As said earlier, TNT is triggered by the fire. Therefore, shooting the flaming arrow at them will light them up.

You can also create flaming arrows by shooting a regular arrow through fire or lava. You can build a fire in front of your TNT block and shoot an arrow through it.

4. By spreading fire or lava to Light TNT

Technically, fire and lava will make the TNT explode. You can set the area around the TNT on fire and ensure it reaches the explosive. Alternatively, when lava flows near the TNT, it will be set off when it catches fire. By using lava and fire, you can light a TNT even if the lava is not directly touching the TNT.

You can light TNT in Minecraft using Redstone circuits by:

Step 2: You can then make a switch mechanism which can either be a button, lever, or pressure plate

Step 4: After completing the circuit, you can blow the TNT using the trigger. You’ll have enough time to get out of the explosion radius.

You can also light a TNT by placing it near another exploding TNT block. Technically, a TNT within the explosion radius will light and explode. When a TNT is hit with another TNT explosion, it will detonate in less than 2 seconds. You should ensure the TNT is within the vicinity, preferably less than three blocks away from the original one.

Using TNT is a more exciting way of setting traps, killing enemies, and destroying things in Minecraft. Before creating complicated traps, you’ll have to know how to trigger a TNT first. If you ended up with a TNT, these are some of the ways you can light them up. After reading our article, it’s time to make the most of these incredibly fun-to-use explosives.