The Virtuoso – Jhin, is a murderous psychopath who kills people in the name of art. His real name is Khada Jhin and he is from Ionia, a character that is beyond genius and always one step ahead of his enemies.

He is all about perfection and completely obsessed with number four. If he would commit a murder or a carnage, it has to be done with style. For Jhin, death doesn’t have to be ugly. He has proven to be an intimidating figure because strong individuals like Zed and Shen have shown their concerns when dealing with him, and Zed even said that he is afraid of him.

Jhin is an iconic marksman in League of Legends, being the only ADC in the game with reloading mechanics (If you exclude graves, at least). Jhin is the type of marksman to do a massive amount of burst damage rather than having high DPS. His whole kit revolves around his fourth shot, which deals the most damage before he is required to reload.

Jhin has received 7 skins since his release today. We will be ranking all his skins from best to worst: 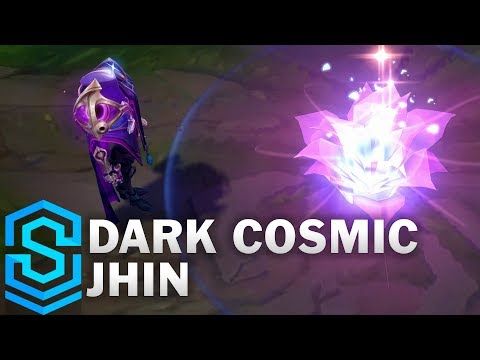 Infused with the power of the cosmos, Dark Cosmic Jhin is aesthetically beautiful and perfect for Jhin. Through some interactions, two extra arms can be seen summoned from his body which sums up his total arm count to four, and we all know how important the number four is for Jhin.

Covered in a purple cloak, shiny stars can be seen floating around him along a black hole on his shoulder. His normal auto attacks leave a blue trail filled with stars behind, but his fourth shot generates a dark aura around his pistol; shooting it will cause a large cosmic explosion.

His Q bounces a cosmic bomb four times; his W fires a shooting star; his E places a black hole as a trap that detonates once it’s activated. His ultimate plays a beautiful thematic song as his line of sight is covered with stars, planets, and black holes. 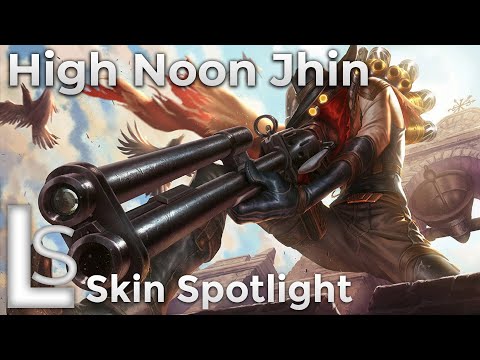 For a skin that was released alongside the champion, High Noon Jhin has done extraordinary compared to other League of Legends champions secondary skins. Inspired by western themes, Jhin wears a red bandana and bright yellow glasses to cover his face instead of his usual mask.

As well as a black cowboy hat. The best part about this skin is the weapon changes. His gun is now a revolver that creates satisfying bullet sounds with his autos. When his passive is active, Jhin starts to glow an orange aura while a quiet western theme sound can be heard.

His ultimate makes switch a sniper with unique sounds that come with each shot. This skin also references the movie “Django Unchained” when Jhin kills Teemo by saying, “I like the way you die, boy.” 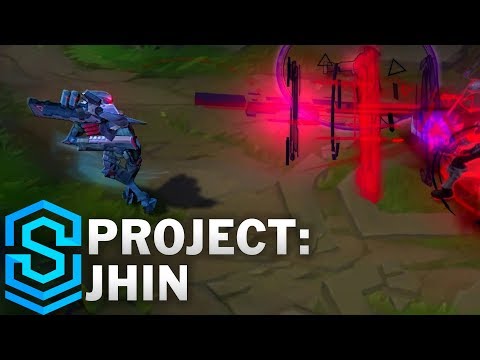 A continuation to the PROJECT skin line in League, Jhin is wearing a robotic black suit that covers all his body and his face. His mask lights out a red aura, and although it is expressionless, you can still see how menacing Jhin remains. Whenever Jhin kills an enemy, a red orbit will spawn from their death location, exploding after a few seconds and leaving red particles in the area.

His Q throws a bomb that blinks a red light and leaves a trail of red behind. His W’s passive around his enemies is presented as a purple triangle. Rooted targets will have a radius underneath them that glitches Jhin’s red mask. His ultimate music for this skin is arguably the coolest among all other skins. His champion theme can be heard with a mix of PROJECT skin line music. 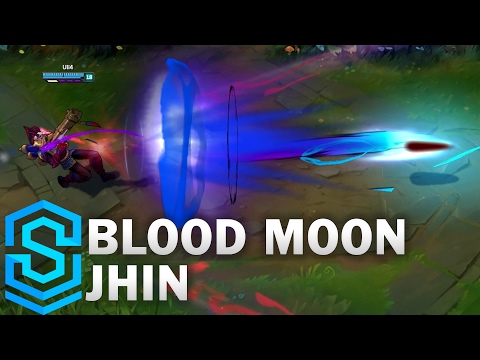 Using the power of the blood moon, Jhin has become a great assassin to hunt down all demons, and perhaps men as well. His face is covered by a white mask with two red horns. His left eye glows red, while his right eye is light blue.

His overall “costume” is red, but his right arm can be seen consumed by some demonic power. Jhin’s auto attacks appear to be infused by blood magic; each shot leaves a trail of purplish blood behind. His Q throws a blue flaming projectile that bounces off four enemies.

His E places cursed traps on the ground that, once activated, intense drumming will start playing as a cue sound. His ultimate ability plays horrifying music, shooting large bullets empowered by blood magic. 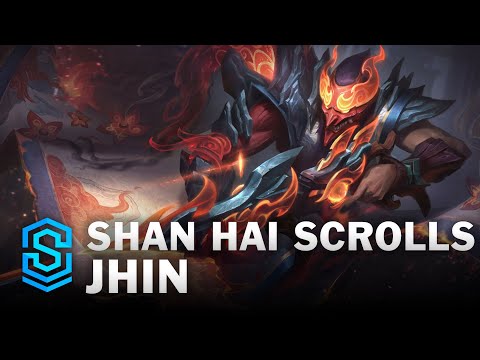 Jhin is an artist, and although his art is mainly done by killing people, it is quite different in this skin. Shan Hair Scrolls makes Jhin wear what appears to be a devil’s face as a mask. His angry expression is expressed through the mask’s big and grumpy eyebrows.

We can also see a flaming object on Jhin’s shoulder to match his aesthetic. Jhin’s Q throws a scroll that bounces four times, making a sound cue of a shamisen. The traps he places with his E are orange spheres that float and explode upon contact.

During their detonation, they play instrumental sounds to show off Jhin’s artistic ability. Jhin’s R opens up the curtains and demonstrates Jhin’s true powers as he snipes his enemies with large orange bullets that leave blue smoke behind. 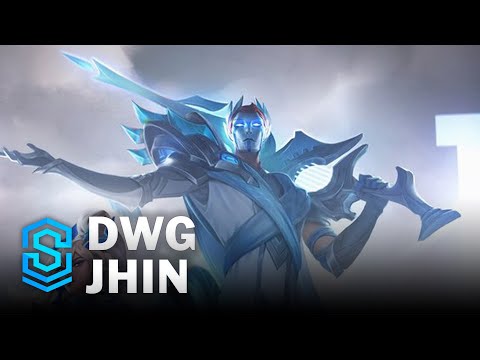 This skin was made to honor the incredible performance of Ghost during the World Championship of 2020. Jhin was Ghost’s signature pick, and this one is a must-buy for all DWG fans. No other skin has come close to showing Jhin’s hidden identity and face as much as this skin did.

It reveals Jhin’s hair which is dark brown with a slight shade of red. His face is a white mask, and his outfit is mainly blue-colored. His mask also comes with blue horns to the side. His abilities leave blue smoke particles upon impact.

His Q is a blue grenade; his E is a blue flower that draws the same mark as his passive on the ground. Activating his R will reveal a large area bordered with blue edges. Sounds of people cheering can be heard briefly as well. 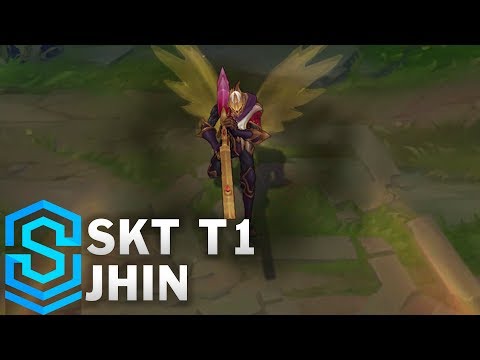 Another signature skin made using Jhin, this one is for SKT T1, and Esport team mainly known for having Faker, the greatest League player of all time. However, this Jhin was made for Bang, who has won the world championship in 2016. Jhin is wearing golden armor decorated with red and white clothes and a golden mask.

His clothes are shaped made it similar to SKT’s team icon. When Jhin’s Whisper is active, he starts flickering his pistol while a red aura glows from it. His basic autos are red bullets that leave a yellow trail behind.

His Dancing Grenade appears as a completely red object. His W’s mark looks just like his classic mark except with the color changes. His recall shows the SKT logo and Bang’s name.

Top 15 Scary Games on Roblox (2023)
How to Light TNT in Minecraft [6 Ways]
How to Get a Mirror in Animal Crossing (New Horizons)
Does Gaming Have Its Place in Your Life?
How to Get More Rune Pages in League of Legends
Top 14 Games Like Spore That You Can Play in 2023
How To Fix Roblox Error Code 279 | 8 Simple Solutions
Top 15 Anti-RPG Games Like Undertale (2023 Ranked)