How To Make a Lever In Minecraft [2023 Tutorial]

Levers could be unfamiliar to you if you’re new to Minecraft. A lever is a non-solid block typically used to create switchable Redstone powder. Levers can also power any adjacent Redstone dust, comparator, or repeater. If you are looking for a lever block, you can find some in jungle temples. Levers are one of the most versatile blocks in Minecraft. They are used for many things, such as in redstone circuitry. This Minecraft tutorial explains how to create and use levers in your Minecraft world.

Levers can also be found in ancient cities and woodland mansions. If you want a quicker way of obtaining lever blocks, you could use techniques such as mining. A better alternative would be crafting them from a stick and a piece of cobblestone.

This blog post details how to use a stick and a piece of cobblestone to make a lever in Minecraft. Read on to find out. 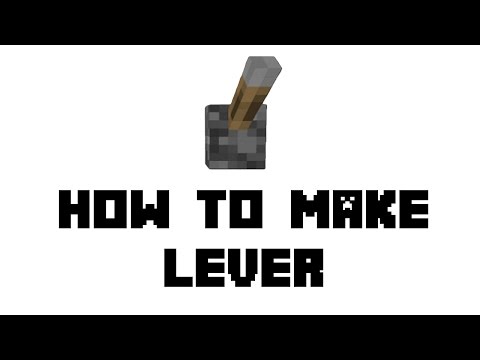 The process of crafting a lever block is straightforward. A stick and a piece of cobblestone are the only things you will require. First, let’s look into how we can obtain them. Locating cobblestone is easy. Dungeons, jungle temples, underwater ruins, castles, and pillager outposts are all places cobblestone can be found naturally.

Sticks are just as easy to find. You are getting a stick as a “junk” item, while fishing is a simple method to obtain one. Sticks can also be found in a Mob, Block, or Chest loot. Once you have a stick and a piece of Cobblestone, you are ready to start.

Start by opening your crafting table and placing the cobblestone in any position. It doesn’t matter where the cobblestone is placed as long as there is a room above it for the stick. Now place the stick above the cobblestone. Doing so will result in the lever forming automatically. You, therefore, don’t need to do anything.

The finished item box will show the lever once it has been created. You can now add the lever to your inventory by right-clicking on it. An important thing to note is that since the lever only requires two items, you do not need a crafting table.

How To Place A Lever

A lever can be attached to any side of a fully-solid opaque block. Examples of such blocks are stones, dirt, and gold blocks. Levers can also be placed on the top of an upside-down slab or stairs. You should note that levers can not be placed at the bottom of a right-side-up slab. When you place a lever to the top or bottom of a slab, the lever will orient itself in line with the placing player.

To place a lever, you must first select the lever in your inventory, then right-click. Now you may place the lever near a Redstone to control its current. An important thing to note is that a lever can not be placed on snow, ice, or glow stone.

How To Activate A Lever

To activate or deactivate a lever, you must right-click and select the “Use Item/Place Block” control. Once activated, levers can be turned on and off as quickly as they can be clicked. An important thing to note is that Mobs can’t switch levers on or off.

How To Use A Lever

As mentioned earlier, you must click on the lever to switch it on or off. Now that you know how to locate, make, place and activate levers, you can use them for many fun and exciting things. For instance, you could use the levers to provide a stable charge, control lights in houses and buildings, or use them in place of Redstone.

Creating a lever is an easy process, only requiring two items. The items required are a stick and a piece of Cobblestone. Both sticks and cobblestones are easy to find. Cobblestone can be found in the temple jungles or dungeons, while sticks can be obtained as a “junk” item while fishing.