The former Hashira, Jigoro Kuwajima also referred to as the Roaring Hashira because of his Thunder Breathing style, is widely known in the Demon Slayer Universe as Zenitsu Agatsuma’s tutor. During his time as Hashira, he was able to kill numerous demons but unfortunately had to retire at the age of 35 years after he lost his right leg in a fight with a demon.

After the incident, he changed his path from being an active Demon Slayer to training the next generation of Demon Slayers.

The Roaring Hashira was a short, older man with wrinkles on his forehead and slanted, large eyes. He had a straight scar with six prongs running down his right cheekbone; he also had bushy eyebrows with a large mustache. His slick white hair was smoothed down with a puff at the base of his head, and a fringe swept away from his face.

He had lost his right leg during a battle with a demon and had a wooden peg in its stead and carried a thick wooden cane for support.

He usually wore a yellow-brown base-colored jinbei kimono with a pale triangle pattern.

Though we mostly only see Jigoro through Zenitsu flashbacks, it was shown that he was a strict and steadfast instructor who was utterly devoted to his students, especially Zenitsu, whom he saved from debt and trained despite his shortcomings.

After his accident, he shifted his focus from fighting demons to mentoring and training a new generation of Demon Slayers and was a great mentor with a soft spot for his students.

His devotion to his students was so great that he was heartbroken when he discovered that his student, Kaigatsu, had become a demon, leading him to commit seppuku.

Before his accident, Jigoro was a fearsome Hashira who was a master of the Thunder Breathing style. He had to retire from the Demon Slayer Corps and instead focused on training new Demon Slayers.

He had a special relationship with Zenitsu Agastama, who he took pity on after the young man was tricked by the woman he was meant to marry and fell into staggering debt with the wrong people. After paying all of Zenitsu’s debt, he took him on as a pupil despite resistance from his student, Kaigaku, who thought he was wasting his time.

When he was training, Zenitsu Agastama was extremely patient with him and never gave up on him no matter how many times he ran away. Jigoro did not mind that Zenitsu could only learn the first technique of Thunder Breathing- Thunderclap and Flash- reassuring him that even if that is the only technique he learns, he must repeat and polish it to the best of his ability. This came to pass as Zenitsu could perfect the technique and even create new techniques off it, and he defeated the Demon Slayer turned Upper-Rank Six demon Kaigaku.

Jigoro’s belief in Zenitsu did mean he was not strict with him, putting him through a hellish training regimen every day to make him stronger, and this helped shape him into a warrior who believed that all his hard work would make him stronger than he used to be.

Sadly for Jigoro, his passionate devotion to his students also became his undoing as he was utterly shattered when he discovered his student Kaigaku, whom he had hoped would jointly take over his rank with Zenitsu, had betrayed the Demon Slayers Corps and became a demon, joining the rank of the Twelve Kizuki. His devastation at the discovery led him to commit seppuku, a grisly ritual observed by samurais, where they would cut their bellies open and bleed slowly to death. In most cases, the samurai would elect a second to cut off his head, so they die quickly; Jigoro did not do this because of the shame he felt at the betrayal and did not want anyone to know the reason for his death. It was a shameful thing for a wielder of Thunder Breath to produce a demon. 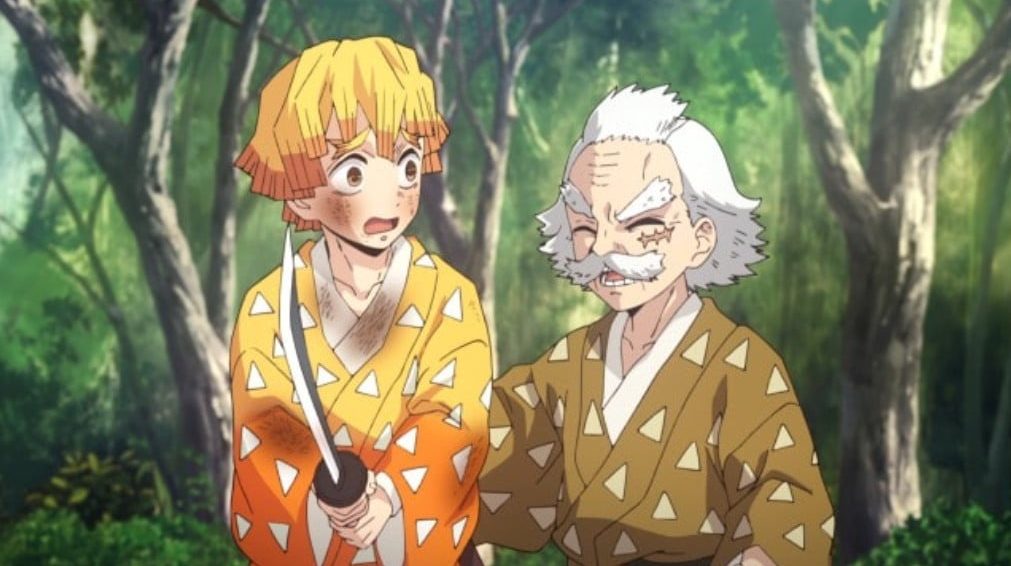 As Jigoro is only shown from Zinetsu’s memories, not much is known about his swordsmanship. Still, as a former hashira and master of the Thunder Breathing, who later became a tutor, Jigoro was sure to be a master swordsman.

His skills as a swordsman can also be seen in his students Zenitsu and especially in the Upper-Rank demon Kaigaku who was a skilled fighter and who used the skills he had learned as a Demon Slayer to become a formidable demon in the Twelve Kizuki.

Jigoro was a Master of the Thunder Breathing style, which is why he is called the Roaring Hashira. This Breathing technique will see the user increase the amount of oxygen in his blood by controlling his breathing rate, which then increases his strength and agility to match that of a demon.

He could do the Blast of Total Concentration, thus increasing his base strength, speed, and stamina. As the cultivator of the Thunder Breathing style, he is adept with all six moves, which are:

First Form: Thunderclap and Flash- This form sees the user rush toward the enemy and kills them with superhuman speed. This form has three subtypes that were mastered by Zenitsu

– Sixfold: A variant of the First Movement with six strokes.

– Eightfold: A variant of the First Movement with eight strokes.

– Godspeed: This technique increases the speed of the user’s Thunderclap and Flash.

Second Form: Rice Spirit- With this technique, the user can generate five attacks around themselves instantly.

During his time as Hashira, he was able to kill numerous demons until the loss of his right leg made him retire.

The Roaring Hashira, Jigoro Kuwagima, was not only a great fighter but an even greater teacher. His impact on the life of Zenitsu Agastama can be felt in the series.

He was adored by Zenitsu, who fondly called him “grandpa” and never forgot his teachings, using them to fuel his abilities as a Demon Slayer despite the fact that he was afraid of fighting and Demons.