Doma is extremely skilled in his Blood Demon Art, able to produce structures out of the snow he makes, including frost…

Navi.
Appearance
Personality traits
The early life of Doma
How did he become a demon?
Blood demon art
Conclusion

Fans like me and you are wondering who the mysterious Upper Rank 2 demon announced at the end of season 2  is. The finale introduces a new demon called Doma. He is one of the series’ fiercest and most formidable demons. Doma leads the Paradise Cult and was formerly rated sixth in the kizuki.

Doma uses the cult to harvest humans for food. The Upper ranking demons of Kizuki are among the most important villains in the story and the most burdensome barriers the Demon Slayers face in their war over demons.

Doma is a character from the series Twelve Demon Moons and ranks as the Upper Moon Two. Doma’s body assumes a toned, strong figure, shown through his skin-tight crimson pullover with blood-flowing designs. His nails were unusually extra long, and they appeared to be light blue.

He has rainbow-colored eyes, with the characters meaning Upper Moon Two inscribed in his pupils. Doma’s eyes are both unusual and beautiful. His irises are a spectrum of desaturated colors that blend into each other while they orbit his eyeballs. This unusualness has led some to assume he is the chosen one and can contact the gods.

His gleaming gold hair is long and spiky. He wears a black and gold throne headgear and a black coat occasionally. He also dresses in baggy pinstripe pants. He is also frequently seen wielding a pair of razor-sharp gold fan bases that he employs as his major weapon.

Doma is smiling and polite, but his upbeat, loving personality is only a mask. He claims to care about his fellow Upper Moons and even pretends to cry when he discovers  Akaza’s passing, even though he has no feelings towards them.

Doma never felt human emotions, even when he was mortal. He was conscious that what he was doing was abnormal and reacted by lying and learning to feign his feelings, allowing him to fool numerous people.

He doesn’t seem to experience sorrow, yet he does appear to seek it at times, indicating sadistic tendencies. He appears to be excited when he asks Muzan the kind of punishment he’d give him for his failure.

The early life of Doma 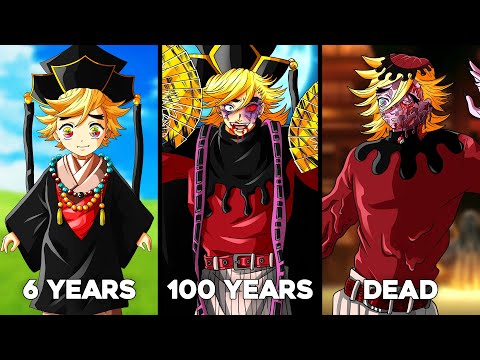 Doma was blessed with such beautiful and distinctive eyes that attracted so much attention. And because of that, his parents were convinced that their child could hear the voices of the gods. He was later ordained as a religious leader of some eternal paradise cult, a rank he dearly maintained until his demise.

In his childhood, he remembers how his enraged mother stabbed his father to death because of his promiscuous nature. After this disturbing event, she also poisons herself right there and dies too. Surprisingly, Doma isn’t affected by the event of losing both his parents at the time. He is rather disturbed by the gruesome stench the blood stains would escalate if he failed to clean the place. The one time he needs to grieve his parents, Doma doesn’t shed a single tear.

When he turned 20 years, Muzan turned him into a demon. The new demon personality made him stronger he began killing and eating a lot of women. According to Doma, his preference was for women since they contained many nutrients that nurtured children.

Doma initially appears to us while he’s still the Upper Moon Six while consuming a geisha. He eventually strengthens and ascends to the rank of Upper Moon Two. He is killed by Kanao Tsuyuri after absorbing a deadly dose of poison from Shinobu Kocho’s corpse. Following his death, he is shown in some afterlife chatting to Shinobu Kocho, demonstrating his first human sentiments of compassion and developing affections for Shinobu Kocho.

How did he become a demon?

Doma was converted to a demon by Muzan when they met after the passing of his parents. He became very powerful and started consuming human flesh.

Lotus ice generation: Doma’s Blood Demon Art bestows him with superhuman cryokinesis. He can manufacture ice and frost from his body and blood, spawn it everywhere, and regulate it at will. Many who breathe the ice generated by his craft die instantly. It causes the perpetrator’s lungs’ cells to die, making them suffocate rapidly.

His frost has also been known to be incredibly cold, as demonstrated by the fact that the atmosphere around Doma’s frost was too cold to make Shinobu’s airways feel ready to explode and nearly freeze Kanao’s body by getting in touch with it.

Doma creates little ice duplicates of himself to attack his enemies. He can create three simultaneously, and each of them has the same strength as Doma and can use either of his Blood Demon Arts. Doma summons a variety of ice lotuses to assault or entrap his foe on his command.

Doma’s most vigorous Blood Demon Art comprises the construction of Bodhisattvas. To assault and crush his victims, he constructs a gigantic Bodhisattva ice statue. The statue can generate enormous cold oozes of wind, which might easily kill someone. 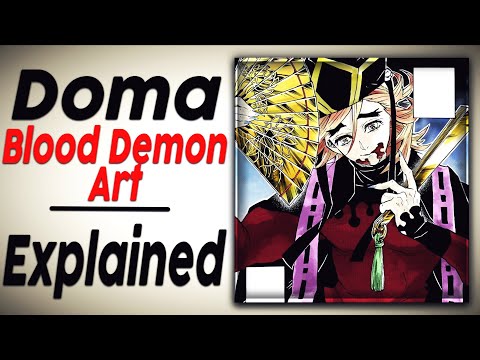 Vines of lotus. He had also demonstrated the capacity to utilize the ice he makes as extra limbs, as witnessed when he used ice vines to hoist himself up the roof while hugging Shinobu.

He was spreading Lotuses: Doma tears into his rival’s skin with many slashes of snowflakes mixed with frost.

Doma distinguishes out as an antagonist because he is the most deranged and wicked of all the characters in the series. Doma is disliked by all who encounter him, and as per an official databook, Muzan dislikes him. Doma will not play an active role in the tale until the last phase of Demon Slayer, but when he does, it will be clear how he stands out.