All You Need To Know About: Flower Hashira [Kanae Kocho]

The Flower Hashira, Kanae Socho died several years before the start of the story but is often mentioned and shown in flashbacks by her sisters- Shinobu Socho and Kanae – and other members of the Demon Slayers Corps. This post will help you know a little more about the gentle-spirited Flower Hashira who lost her life battling a demon.

Kanae Socho was a tall girl with a slender build and prominent red lips, contrasting with her pale complexion. Her eyes were pale violet and were slanted with white sparkles reflecting light off them, and she had straight, waist-length black hair, which she styled in two shorter clumps over her shoulders and ear-length bangs on both sides of her face. She also used to adorn her hair with green-pink butterfly hair pins on either side of her head; this later became a memento for her adoptive sister, Kanao Tsuyuri, after her death.

Her Demon Slayer uniform was a purple-tinted version of the standard uniform with a piece of black fabric around her calves and zōri with pale straps. Her haori was white with butterfly patterns that faded to green then pink towards the cuff and hem, and in the present day, her sister Shinobu Kocho wears it in remembrance of her.

From Flashbacks, it can be seen that while Kanae Socho was a powerful hashira, she was also sweet-natured and kind. She was pivotal in the rescue of Kanao from a slave trader and was kind, loving, and patient with her, giving her a coin to make decisions when it was discovered that she could not communicate orally.

She was present when Sanemi Shinazugawa mocked the Demon Slayer Corps leader, Kagaya Ubuyashiki, for not caring about Demon Slayers that died in the line of duty and corrected his assumptions, telling him the Corps leader memorized the name of every dead Demon Slayer.

She envisioned a world where demons and humans co-existed peacefully and inspired her sister Shinobu to do the same. Unfortunately, Shinobu gave up on these hopes after Kanae’s brutal death at the hands of demon Doma.

One moment that perfectly encapsulates Kanae’s capacity for kindness and good was when she, even though he had mortally wounded her, felt pity for the demon Doma after seeing through his lies to discover that he was emotionless and empty.

However, her kind nature did not limit her fighting skills as she was a master of the Flower Breathing style and rose to Hashira, a title given to Demon slayers that had defeated one of the Twelve kizuki or defeated fifty demons.

Her strict side was shown when she appeared as a spirit to order Shinobu, who was about to give up, to stand up, brush away her excuses and fight during her battle with Doma.

Before becoming Demon Slayer, Kanae and her sister Shinobu lived a contented, privileged life with their loving and wealthy parents, who cared deeply for both of them. Their life changed drastically, however, when their home was attacked by a demon who killed their parents, who tried to protect them and almost lost their lives save for the timely arrival of Demon Slayer Gyomei Himejima, who killed the demon before he could harm them.

This tragic incident changed their lives completely and made them vow to join the Demon Slayer Corps to protect humans and prevent other families from suffering their sad fate. Both successfully trained to become Demon Slayers and developed their Breathing styles, with Kanae taking to Flower Breathing and later becoming the Flower Hashira while Shinobu developed Insect Breathing.

She was the first to notice a little girl, whom she would later name Kaneo, being dragged on a leash by a man. She approached and tried to get to release the girl, ignoring that she was dirty and could not speak. When the man demanded to be given money in return, her sister Shinobu threw money in the air, grabbed the rope released by the man in surprise, and ran away with her.

They both took her to the Butterfly Mansion, where they discovered that the girl could not speak or communicate due to past trauma unperturbed, Kanae adopted and named her Kanao, giving her a coin to flip when she wanted to communicate and make decisions until she was able to make decisions on her own.

A few years after becoming an Hashira, Kanae ran into Doma, the Upper Rank 2 of the Twelve Kizuki, and was fatally wounded from the encounter. The rising sun chased him off before he could devour her, however, and as she lay dying in her sister’s arms, she urged her to live a normal life away from the Demon Slayer Corps. Shinobu, on the other hand, did not listen to her plea and was deadest on avenging her death; thus, with her last breath, Kanae described Doma to her and passed away soon after.

Her death had a big impact on Shinobu, who, determined to avenge her death, turned herself into living poison in the hopes of weakening Doma after he devoured her before he would be killed by Kanao to finish their vengeance.

Her kind nature and gentle spirit belied a great swordsman who was skilled enough to become a Hashira in the Demon Slayers Corps, a rank reserved for Demon Slayers who have battled and defeated one of the Twelve Kizuki or 50 demons.

Unlike her sister, that lacked the strength to cut off the head of demons and used a special Nichirin sword to inflict multiple wounds on her targets to poison them fatally, she used an ordinary Nichirin sword in battle. A testament to her abilities was that she could battle the Upper-Rank Two Demon, Doma, till sunrise, as even though she could not defeat him and be fatally injured, she could match up to him for a long period. 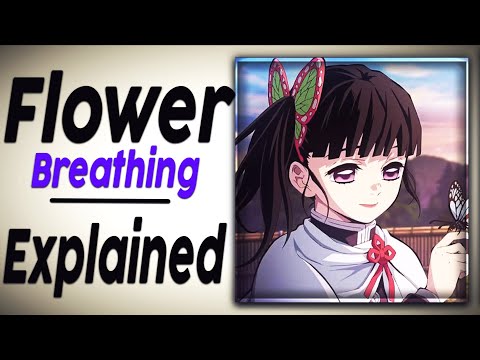 Kanae mastered the Flower Breathing technique, which her adopted sister Kanao learned by watching her.

Some of her techniques were:

Fifth Form: Peonies of Futility – The user unleashes a flurry of nine consecutive attacks that flow and weave in on themselves.

Sixth Form: Whirling Peach – A technique used after or during evasion, the user spins around, moving with their body weight to deliver an attack.

Final Form: Equinoctial Vermilion  – The final and most intense Flower breathing technique where the user’s kinetic vision is raised to its maximum while they perceive the world as if it were in slow motion.

Usage of the technique, however, is hazardous, as the tremendous strain on the eyes could cause blood vessels to rupture and lead to partial or complete blindness. This technique is still usable even if the user only has one fully functional eye.

Although she had unfortunately lost her life before the story’s setting, Kanae Kocho’s influence was visible to everyone she knew.

Her death was a major catalyst in sister Shinoku’s decision to make herself a living poison to defeat her killer Doma ultimately, and it was her intervention that saved the life of Kanao and set her on the path to becoming a Demon Slayer.

She was remembered fondly by other members of the Hashira, one of whom was the Wind Hashira, who, because of her, was kind to her sister Shinoku.