The insect hashira, Shinobu Kocho, is one of the most important hashira in the Demon Slayer universe. While physically, she was not the strongest hashira, she was able to use her ingenuity and intelligence to not only become an adept warrior but to also create a new breathing style that complimented her physical lapses.

Shinobu Kocho is a small, frail-looking young woman whose physical appearance belies her true strength. Her large, gradient purple-colored eyes are without pupils. They are similar to that of insects and styles her dark wavy hair, which is tinted purple at the tips, in a flat yakai-maki bun held at the back of her head with a white, light purple, and turquoise butterfly ornament with center-split, ear-length curtain bangs that frame both sides of her face. She is quite pretty and is described by Zenitsu Agatsama as “so cute, that she could make a living off her looks alone”

She wears a dark purple variation of the standard Demon Slayer uniform with gold buttons, which consists of a purple straight-lined black jacket with matching colored tabi socks and hakama pants which she tucks in a white butterfly patterned Kyahan with pale turquoise and pink edges around her legs.

Over her uniform, Shinobu wears a white, butterfly wing patterned haori that fades into pale turquoise and pink at the sleeves and hems cuffed with a black and white dotted trim. This haori belonged to her late sister, Kanae Socho, the former flower hashira.

She wears white zōri sandals with purple straps with a blade hidden in one of the heels.

She was shown wearing a different Demon Slayer uniform of a darker shade of purple with silver buttons, aged 14, with her chin-length hair tucked at the back of her ears.

With a bright appearance and quick smile, Shinobu, at first sight gives off a friendly and kind disposition. However, this is shown to be a façade, as it masks a fierce and ferocious nature.

While she claims to want to get along with demons, what she feels towards them is a passionate hatred and anger that is a result of the death of her parents, her sister, and friends at the hands of demons and thus can be cruel towards them as is seen when she kills the Spider Demon (Daughter) after giving her false hope of helping her and when she showed no hesitation in trying to kill to Nezuko Kamado. However, when she hears the Kamado siblings’ story, she becomes more compassionate toward them.

It is later revealed, during her battle with the demon Doma, that due to her physical limitations she suffers from an inferiority complex and is jealous of the other hashiras physique, often cursing her body for not developing and making her more effective in combat.

She can sometimes be unkind, teasing others almost sadistic way, with Giyu Tomioka, the Water Hashira, being a frequent target.

As a young girl, Shinobu had a blunt and brash disposition which is seen when she rescues Kanao Tsuyuri with her sister however after the death of Kanae, she started behaving like her late sister by showing a more positive attitude and demeanor, she revealed, was a way to pay her last respects to her sister. 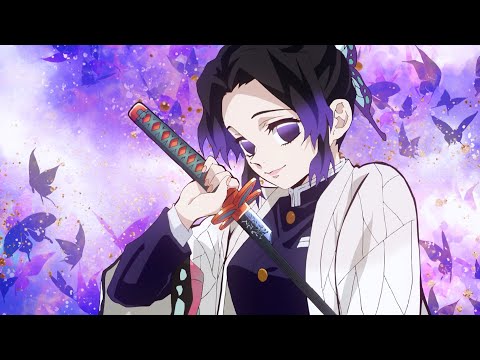 Before her journey as a Demon Slayer, Shinobu had lived a happy life with her sister and parents who were very affectionate to their children, however after a demon attacked and killed their parents, after they were saved by Gyomei Himejima she decided, with her sister, to join the Demon Corps Slayers and help defeat demons and prevent others from going through what happened to their family.

While her sister Kanae was alive, Shinobu shared her belief that demons and humans could co-exist together in a peaceful world but this changed after Kanae’s death at the hands of the demon, Doma. Shinobu found her sister’s dying body and urged her to give the name of the demon responsible for her death while Kanae tried to persuade her to leave the Demon Slayers Corps and live a normal life, Shinobu refused and, after getting a description of the demon from Kanae, made it her life’s goal to avenge her sister’s death.

As she did not have the physical strength to wield the traditional Nichirin sword and decapitate demons like the other Demon Slayers, Shinobu devised a special sword which has a tip like that of insects which she uses as a stinger to inject demons with lethal Wisteria poison. She makes up for her lack of strength by being very fast and agile, using her speed to overpower demons quickly, and was able to impress Doma, an Upper-Rank Two Demon of the Twelve Kizuki with her speed and agility.

Shinobu’s intellect and immense knowledge and skill in the medical and pharmaceutical field more than make up for her limitations with natural combat as she is able to create numerous poisons with the Wisteria flower and is able to use them to achieve the ultimate results in combat, being able to kill demons in seconds. She was also knowledgeable about poisons and venoms created by demons and was able to use this knowledge to undo a poison on Zenitsu Agastama to stop him from transforming into a spider and restore him back to his human form.

She also helped Tamayo and Yushiro create a four-stage drug that was to be used to weaken Muzan, the Demon King and this helped immensely in the final battle as it helped make even the weakest attacks by the Demon Slayers very effective, making them able to drive him to a corner and finally kill him.

After the death of Kanae, Shinobu’s greatest wish was to avenge her death and kill the demon responsible for it, and in preparation for this, made herself a living poison by injecting herself with highly concentrated Wisteria-based poison for over a year. She was able to saturate her body with the poison which merged with her entire body’s cell structure and ingested about 37 kilograms worth of poison which was approximately seven hundred (700) times more than the amount necessary to kill an average demon.

She discovers, during her battle with Doma in the Infinity Castle, that he had prepared for her poison after hearing of them after her battle with Spider Demon (Daughter)and is able to nullify their effects. After trying several insect breathing techniques which proved futile for him, she was close to death and was finally absorbed by the demon who also unknowingly absorbed the lethal poisons and melted down to his bones, preventing him from regenerating.

Shinobu’s lack of physical strength meant that she could not properly wield the Nichirin sword used by Demon Slayers to decapitate demons and thus she devised a special Nichirin sword that pointed at the tips like an insect stinger and was used to inflict multiple wounds on her targets to fatally poison them.

As she lacked strength, she made up for it by being agile and fast with a unique fighting style that specializes in fast and powerful sword thrusting and piercing techniques to inject poison into demons. Due to the structure of her sword, she is unable to block attacks and makes up for that with her swift thrusts and stabs.

Her swordsmanship prowess saw her go toe-to-toe with the Upper Rank Two demon Doma, impressing him and leading him to praise her agility and speed.

Shinobu Kochu Breathing Style is Insect Breathing, a style she created herself to make up for her physical inabilities and centers on fast, agile movements mimicking that of insects, especially the butterfly.

This style is only used by her with her special sword with a needle-like tip similar to that of an insect’s stinger in both appearance and function as it inflicts multiple wounds on the target.

Some of its techniques are:

Butterfly Dance: With this technique, the user leaps into the air and charges toward the opponent, and stings them multiple times with their blade to inject poison.

Dance of the Bee Sting: True Flutter: This technique sees users dash at their target at blinding speeds and uses the momentum of their speed to then strengthen a single thrust into their opponent and inject poison into them.

Dance of the Dragonfly: This is a six-strike attack with which the user aims to strike and inject their target with multiple doses of poison at the target’s weak spots (such as the neck, heart, torso, etc.) in order to kill them with a large dose of poison.

Dance of the Centipede: Hundred-Legged Zigzag – An attack which sees the user use their full speed to run a zigzag pattern that confuses their opponent in order to create an opening for them to directly stab their opponent’s neck and inject poison to kill them, with the stab’s force and power is further enhanced by the momentum of their speed.

Despite her outward friendly nature, Shinobu Kocho’s willpower and determination cannot be understated, she did not dwell on the fact that she lacked the physical strength necessary to become a Demon Slayer instead of creating a brand-new Breathing style that complimented her body type and helped her immensely in combat.

While she lost her life, she was able to avenge her sister’s death after being absorbed by Doma who unknowingly ingested the vast amount of poison she had stored in her body before he was finally beheaded by Kanao Tsuyuri.