One Piece is the most successfully selling manga in history, it is no surprise that the popularity of the show would help Nami get on this list. She made her debut in episode 1 but it was only until later that more information was revealed about her.

Nami is a very smart and cunning girl, and even though she is not the strongest, she still stands her ground when she has to. Money is also her favourite thing. 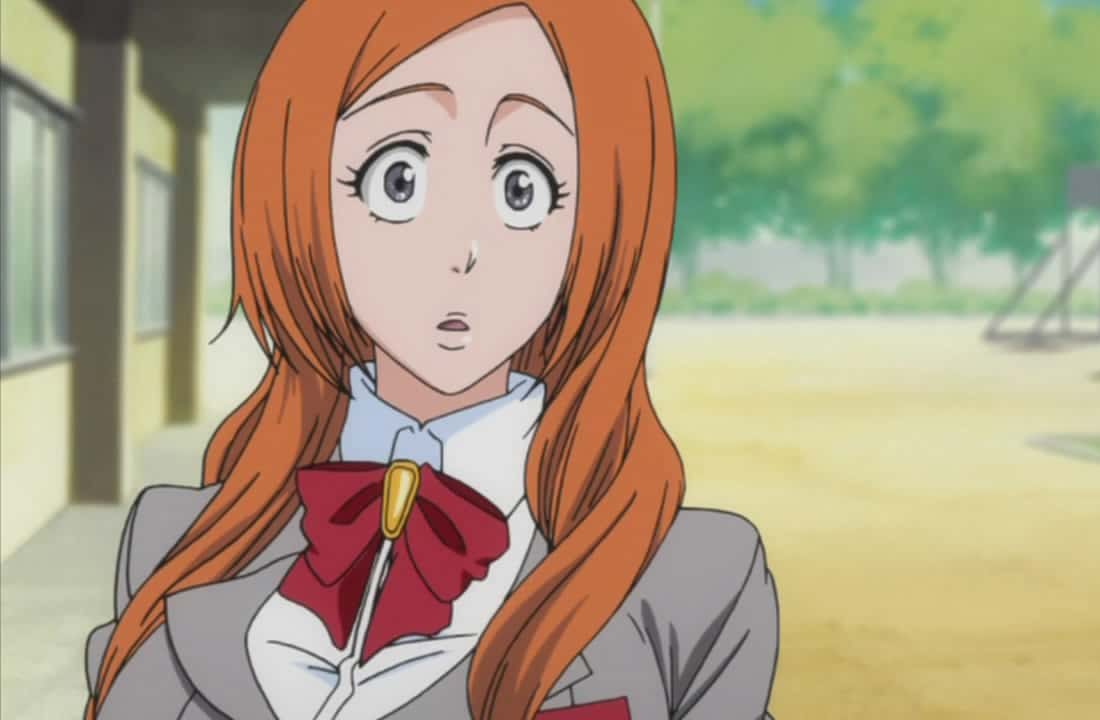 Bleach is one of the legendary series that was released alongside Naruto, One piece and Dragonball. Orihime is one of the supporting characters to Ichigo but she starts to get so much screen time later in the series. So many events happen around Orihime, and her overpowered healing abilities make her very useful. She is kind, caring, gentle and shy sometimes.

Orihime isn’t afraid to be selfless as she would rather care about her friends’ safety more than her own, which makes her an amazing potential romance to Ichigo.

Yotsuba Nakano is one of the main Quintuplets in the series, each one of them stands out with their different personalities yet identical appearances. Yotsuba stands out from her other sibling by being a lively girl with a high tendency of helping others.

Yotsuba can be bold at times but she is also the biggest dummy of the five of them. Her orange hair and green ribbon easily identify her from others. She also has a cheerful voice.

Sakura is a high school student who has fallen in love with Umetarou Nozaki. As she tried to confess to him, Nozaki misunderstood the atmosphere and thought she was a fan, that’s when he revealed himself to be a popular author. Being completely flustered and confused by the situation, she accepted to be his assistant instead.

She is a bright and cheerful girl who has high hopes of getting into romantic scenarios with her crush, but all those events were turned into hilarious situations instead.

<From The Promised Neverland>

Living in a big orphanage surrounded by walls, Emma is the main character of Promised Neverland. She is a kind, brave and confident girl who acts as an older sibling for all the young orphans.

When the dark truth of the orphanage’s purpose was revealed to Emma she was determined to help everyone escape and leave no one behind, by doing so she risked her own life because she had to stay longer in the orphanage, and her ‘adoption’ day was getting close, but that didn’t stop her from breaking down.

The leader of the Arena team, Nami, has developed a crush on the main character after they had taken him in and permanently made him a member of their team. Nami has long orange hair that is put up in a ponytail.

She usually wears a white tank top and military green pants. It is also said that Nami is a Whispered, meaning she can create Black Technology which is much more advanced for the current era.

A member of the student’s council in the Ashford Academy, Shirley is known to be an outgoing cheerful girl. She is one of the most favourite female characters in Code Geass. Shirley has fallen in love with Lelouch and she is constantly seeking to get his attention.

However, she also deeply cares for him, and she makes it completely obvious to everyone that she is in love with Lelouch. Being caught in the crossfire of Lelouch goals, she becomes conflicted but proves her loyalty towards her loved one.

Asuna is a high school student who entered the world of Sword art Online before being trapped. She is a very talented fighter with her weapon of choice being a sword, as well as a talented cook, having her cooking skills maxed out in the game.

Asuna and Kirito had fallen in love with each other and decided to get married in the world of Sword Art Online, but their happiness was soon paused once they were reminded of what they must do in order to rescue everyone trapped in the game.

Their death in-game would also mean that in real life, there was so much to risk, but Asuna didn’t hesitate to move forward. She is a very kind and optimistic girl who can also hold her ground.

Asuka is the Second Child who pilots the Evangelion Unit-02. She is one of the main characters in Neon Genesis Evangelion. Soryu is a prideful young girl who can be arrogant sometimes. She is very confident in her piloting skills and she isn’t afraid of boasting about it.

Soryu can be seen acting quite mean towards Shinji from time to time, but behind her strong stubborn personality is an insecure girl. She also struggles at expressing her feelings, especially towards Shinji who is attracted to her.

The lieutenant of the 10th division, Matsumoto can be always seen around the Captain of her squad, Tōshirō Hitsugaya. She is a very goofy lady who likes to end up drunk after she stops counting the glasses of alcohol she had drunk.

When she was a child, she lived in a very harsh environment where she almost starved to death before being saved by Gin, the very man for who she ended up falling in love.

Matsumoto is a strong fighter who can get work done once serious. She also can show her empathy toward other people’s feelings, which is a great trait to have.

Yui is a high school student who always keeps a smile on her face, even when she doesn’t feel all that great. She is brilliant when socialising with other people, although she dislikes arguments and would rather avoid them.

Yui can be easily befriended due to her cheerful personality and smart thinking. She has a variety of skills that she enjoys doing, like singing and cooking. Yui often attracts other male students due to her appealing appearance so she uses Yumiko as a way to get out of sticky situations.

Tachibana is one of the main female characters in Nisekoi. She met Raku at a very young age, becoming her first best friend and her first love. Because she had not been in a good healthy state, she wasn’t able to spend time outside, however, Raku would climb trees in order to get in her room and spend time with her.

Marika’s father noticed her affection for him and he officially agreed with Raku’s father to have them be engaged. Marika is too obsessed with Raku, she is very straightforward and not afraid to express her feelings. She is a prideful and optimistic girl but she also cares deeply for her friends.

Misty is a very popular figure in the world of anime and cartoons. Pokemon used to be broadcast on all kinds of children’s channels outside of Japan. Even for those who can’t differentiate between Cartoon and Anime, they will still know Misty and her travelling Journey with Ash.

Just like Pikachu being Ash’s signature Pokemon, Togepi is Misty’s signature Pokemon. She inspires to become a Water Pokemon Master. Although she can be very loud and easily frustrated at times, she is also a sweet and optimistic girl.

<From My Hero Academia>

Itsuka is a student in U.A High School who aims to become a hero. The rivalry between Class A and Class B had started after the U.A High School held competitions in Season 2. And although this ‘rivalry’ might sound bad, Itsuka was the one to keep both classes on good terms.

She is a very kind girl who isn’t afraid to scold her classmates when they overstep their boundaries. She also has the ability to enlarge her hands into giant fists that she can use to fight. Her cheerful personality helped her become the class representative.

<From Spice and Wolf>

Holo is a wolf spirit that has escaped from a village she stayed in for centuries. She joined Lawrence as his travelling partner before opening a bathhouse for themselves. These two eventually got married as they fell in love.

Holo is an intelligent girl with plenty of confidence. She can also turn into a wolf in dire situations, and as long as she keeps Lawrence safe, she doesn’t mind changing to that form.

Kaede is one of the main characters in the Shuffle series. She is Rin’s childhood friend and she has grown to fall in love with him.

However, her love and obsession with Rin have become very unhealthy to the point where she would not care about her needs.

On the other hand, she is a very polite and attractive girl. Kaede changed since her mother’s passing, and whenever it is something about Rin she shows Yandere signs.

Sora is one of the female characters featured in the Digimon franchise. She is a DigiDestined who recruited Biyomon as her Digimon hero. Sora is a lovely and well-mannered girl.

Unlike her other friends, she didn’t understand the relationship everyone had with their Digimon partners, and out of all of them, she was the most to argue and fight with Biyomon.

However, she quickly grew to love her Digimon partner. Sora holds the Crest of Love which allows her to understand what it means to love and protect someone.

The main character of the series, Lina is an extremely strong sorceress who seeks to go out on plenty of fun adventures and treasure searching. She is capable of casting spells with immense power that can obliterate an entire city.

She is infamous for being the most terrifying sorcerer in the land. But even someone as strong as Lina can have fears, like the fear of an older sibling, and in this case, it is Luna, her older sister.

<From Shokugeki no Soma>

A rival for the main character in Shokugeki no Soma, Erina is known to have one of the best palates in the world. Her cooking skills are just too brilliant and they are admired by Totsuki.

Coming from a noble family, Erina has grown up to have only the best breed of things in her life. This has increased her standards of things and allowed her to become egoistic, but for this very reason, she isn’t capable of making friends.

However, once Erina made some friends, she understood how much she deeply cared for them and for keeping them around.

Love Live is an anime project about nine school girls who seek to become school Idols. Although it is a hard goal to achieve, the group worked together to maintain confidence and keep everyone constantly motivated to practise. One of these girls is Rin. She is a super optimistic and cheerful girl who likes to play sports.

In the past, she was teased for wearing skirts, this has led her to become sort of a Tomboy. Luckily for Rin, her group of friends would help her move through her insecurities, thus allowing her to become a school Idol.