I am My Hero Academia’s biggest fan, but I sometimes have so much to say on behalf of these characters! With these illustrated posters we can spread awareness about gender diversity in popular media.

Member of the League of Villains, Himiko Toga is the only female. She was introduced alongside Dabi. Being influenced by the hero killer, Stain, she wanted to join Tomura for her to become like Stain and to be able to kill Stain.

Toga is a complete psychopath who has committed a series of murders. Her Quirk allows her to change her form to whoever she took blood from. She also appears to be fascinated by Deku, bruised Deku at least.

In the U.A. Highschool, The Big 3 is a group of students known to be the best among everyone. Nejire Hado is one of them. Being a part of The Big 3 states that she is experienced and strong enough to take on missions that real heroes would struggle with.

She can also be seen as a role model for many students. Her Quirk is Wave Motion which allows her to convert her energy and strength into blast waves that she can use to fly or attack enemies from a long range.

The original holder of One For All before All Might inherited it from her. Nana Shimura is a close friend of Gran Torino and the teacher of All Might before he became the Symbol of Peace. Nana was the one to pass the ideology of smiling in the face of danger, which was also passed on to future generations and especially to Deku.

Her role in the story against All For One and towards her grandson, Toumra, had a huge impact on the characters and us, Viewers.

Class 1-B in the U.A. High School, Itsuka Kendo is a very kind and caring person. Many of her classmates look up to her and view her as their older sister. Itsuka is also ready to give up an important reward or a position if she finds her competitor more worthy of earning it.

Itsuka has a huge sense of responsibility; she is the one to put any of her classmates back to their boundaries if they overstepped their rivalry with class 1-A. Her power allows her to increase the size of her fists, granting her extreme physical strength.

Not everyone is fortunate enough to be born with Quirks that can be useful in battles, Mei Hatsume is one of them, but that didn’t stop her ambition of becoming a Hero. While she does have a Quirk called Zoom, which allows her to see from a vast distance, her true talents come inside the Department of Support.

Mei can create equipment supporting other students and other heroes in battles or rescues. She has helped Deku on many occasions while also making Uraraka feel jealous.

Teachers in My Hero Academia are very interesting to know about. They have years of hero experience, they are excellent fighters, and they are protective of their students. However, Emi Fukukado is a teacher from a different Academy High School named Ketsubutsu.

She is also called Ms. Joke. We can assume that her Quirk can force people to laugh. It also seems that she has some interest in class 1-A teacher Shota Aizawa, as she keeps asking him to marry her as a ‘joke.’

A class 1-A, Jiro is slightly a quiet girl compared to other extroverted students like Mina and Uraraka. She isn’t open about her hobbies even though she is very talented at singing and playing the guitar or the bass. Her Quirk is Earphone Jack, which works by using the sound cables coming from her ears.

Jiro can detect noises coming from afar and scout the number of enemies approaching. She can also use her sound cables to unleash a loud noise wave as a way to attack.

Also known as Mount Lady, Yu is a Pro Hero introduced in the first episode. According to her, the youth should be given more chances to shine and get famous, which is why she attempts to glow in public by making herself attractive and appealing.

Her Quirk allows her to become a giant, increasing in size, and with the size, the increase comes the ‘huge’ appeal of Yu. Although her interest might lie in fame and money more than heroism itself, she still risks her life against many villains for saving and protecting people from harm.

Mina Ashido is a student in class 1-A. She is a very extroverted girl who is always cheerful and full of energy to do many exciting things. Mina cares a lot about her friends and prefers to spend time with them than doing school work.

She can appear very upset when she can’t hang out with others due to a punishment of some sort. Her Quirk is Acid, which allows her to generate Acid from her body; she can use it to increase her mobility by sliding on her feet or to attack as it can melt things.

One of the candidates for becoming the representative of class 1-A, Momo, is a very intelligent girl who entered the U.A. High School through recommendation. She came from a wealthy family but wasn’t open about that until she invited her classmates to study.

Although she had confidence issues, Momo was able to break that barrier and became a brilliant strategist in battle. Her Quirk, Creation, allows her to create an object from her body. It is an extremely powerful Quirk but very difficult to master. 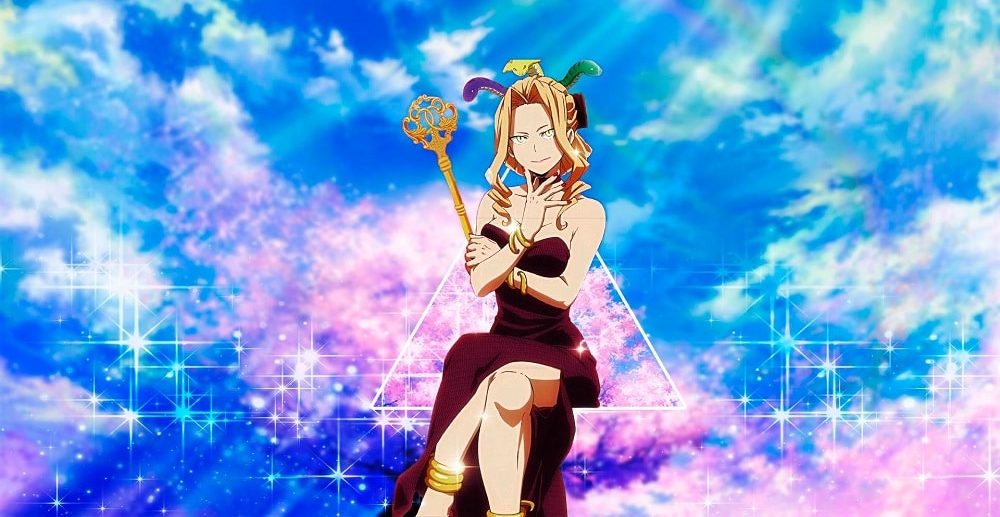 A beautiful and hot figure as a celebrity and a Pro Hero. Uwabami flexes her beauty everywhere and attracts many fans’ attention to take shots of her charm. When Momo and Itsuka arrived at her workplace for their internship, they spent most of their time just being pretty rather than learning something useful or training for future battles, which speaks for Uwabami’s priorities and standards.

Another student in class 1-A, U.A. High School, however, this one has lots of mystery around them. Toru is known as Invisible Girl. As the name suggests, Toru has an Invisibility Quirk that allows her to stay permanently invisible. Her face was never revealed; no one knew what she looked like.

However, the clothes she wears can help imagine the body figure she has. When it comes to Invisible Girl, she can potentially be the prettiest female in the show simply for the fact that anyone can imagine what she might look like up to their standards.

Uraraka is a very sweet and kind girl. She was first introduced when Deku almost tripped in front of the school, so she helped him from falling and saved him from embarrassment. She is a very helpful girl who cares about the people close to her. Her reason for becoming a hero is to make money to help her parents.

Being a completely wholesome person, Uraraka should not be underestimated either. Her Quirk Zero Gravity allows anything she touches on to lose weight and gravity, making them float indefinitely. She has also trained to fight in close combat.

She is one of the top 10 best Pro Heros in Japan, ranking as NO.5 in strength, skills, and experience. Rumi’s Quirk is called rabbit; it is a bit of an obvious name considering she has long bunny ears.

Rumi’s body is very muscular, especially her legs, probably empowered by her Quirk. Her abilities and decisions during fights must be top tier considering her rank. Rumi is straightforward, and she isn’t afraid of speaking out in any scenario.

Another teacher on this list is Nemuri Kayama, who works in the U.A. High School. She is seen in important meetings with the principal and other familiar faces. Her hero’s name is Midnight.

She has a weird thing for Youth and their determination; it was seen during the U.A. tournament when the students expressed their strong sense of heroism that she reacted aroused by their words.

Nonetheless, she is considered a Pro Hero, and her Quirk unleashes a violet mist that puts anyone to sleep if they inhaled it enough.

Prior to becoming a villain and the main antagonist, Lady Nagant used to be a Pro Hero. She has a Quirk called a Rifle, which allows her to use one of her arms as a sniper rifle and using her sniping skill, she makes a deadly shot.

Kaina Tsutsumi, her real name, has also been giving Air Walk Quirk, which All For One had; this allows her to float in the air, giving her much more mobility than before. Combining it with her sniping talent, she can become a lethal foe.

Liked to be called “Tsu” by her close friends, Tsuyu Asui is a student from class 1-A in the U.A. High School. She has an interesting Quirk and an Interesting personality, and she is a fan favorite by the fandom of Boku no Hero Academia.

Her Quirk is called Frog, which gives her many superhuman abilities, like sticking into a wall or extending her tongue. Tsu also imitates the sound frogs make by saying “ribbit ribbit” when she talks, but that is natural considering her Frog Quirk.

A second-year student at Shiketsu High School wants to become a Pro Hero. During the license exam, she was an imposter, faked by Toga from the League of Villains. After he returned, however, she confirmed what kind of personality and attitude she had.

She is a carefree person with a Quirk that allows her to create illusions, like magic tricks. Her Quirk name is Glamour.

Eri is a small girl with a terrifying Quirk named Rewind. She can rewind anything to even before the point of existence, which she had accidentally done with her father, killing him in the process. Eri is a traumatized girl kidnapped by a group of organizations that used her blood to experiment for certain projects.

Fortunately, Eri was saved by Deku, and the Pro Heros and her Quirk were put under control by teacher Aizawa. Eri is a timid and quiet girl slowly opening up and becoming brave.

She is the mother of the main protagonist in the story, Deku. Since episode one, it has been revealed that Midoryia is Quirkless which shattered his dreams of becoming a hero. Inko didn’t seem to know what to do since she couldn’t believe that Quirkless could become a hero.

However, she regretted not supporting her son, and afterward, she did everything a mother would do before Deku went to the U.A. High School to become a hero.