Obanai employs an unusual kind of swordplay that involves attacking ironically and using writhing techniques to bend his swords. Due to his master skill with…

Navi.
So why carry around a snake?
Appearance
Disposition
Personnel resume
Swordsmanship
Overall Concentration of the Serpent’s Breath
Combat record
1. The battle between Muzan vs. demon slayers
2. Upper-Rank Four Nakime is up against Mitsuri Kanroji and Serpent Hashira Obanai Iguro
Conclusion

The anime has presented some characters with fascinating personalities and extraordinary abilities. They include the Hashiras, the most ferocious Demon Slayers famed for their entrancing swordplay and potent Breathing Techniques. They are the only people that can compete against the Upper-Rank demon on an even playing field.

Although each Hashira is unique, the secluded Serpent Pillar Obanai Iguro appears to be the most intriguing Hashira in the series. Obanai could draw the viewers’ attention not just because of his distinguishing qualities but also because of his remarkable look. Fans are confused as to why he wears a snake across his neck.

Continue reading below to find out more about this serpent Hashira.

So why carry around a snake?

You must be as curious as I am.

The one and only Demon Slayer in the series that nearly constantly wears a snake over his neck is the serpent Hashira. He primarily relies on his pet snake to make up for his partial blindness, although this is not done to scare people.

Obanai’s Kaburamaru is not your typical pet snake since it has the unusual ability to recognize and foresee the movements of its prey and then communicate this knowledge to its owner.

Because Obanai perfected his breathing technique and Kaburamaru developed the serpent breathing, his swordplay resembles the rhythms of a snake.

Obanai is a small, slender man with a reasonable amount of muscle. His straight-edged black hair is worn down with 2 short strands falling between his eyes, with the longer strands falling to his cheeks and the shortest ending at his shoulders. Due to Obanai’s heterochromia condition, which causes his right eye to start yellowing and his left eye to turn turquoise, his eyes are almond-shaped, slant upward on the far edges, and are pretty distinctive. Due to his right eye’s limited vision, he is half blind.

Obanai has had a unique mouth as well since the time he was twelve years old; it was forcibly chopped from the edges to his ears to give it a more snake-like appearance. This left a significant wound, which he covered with the bandages he kept over his lower jaw.

He is dressed in a dark blue version of the typical Demon Slayer outfit, coupled with a haori with black and white pinstripes, and is bandaged over his calves and eyes.

He is also frequently seen with Kaburamaru, a white serpent, wrapped over his shoulders.

Obanai, alongside the other Hashira, who is still alive, is assaulted by the demon’s thrashing whips during their combat with Muzan. Obanai sustains three deep, slanted slashes across his eyes, leaving him entirely blind.

While he was a young boy, Obanai had waist-length hair that he had wrapped along his back with a long white wrap and a mouth that appeared normal before it was trimmed by his family. He also had on a simple white kimono.

Obanai is an extremely tough and unforgiving person who has little patience with people who do not follow the Demon Slayer guidelines. He criticizes Tengen Uzui for taking severe injuries while fighting the “weakest” Upper Rank and tells him to “fight to the death” when Tengen wants to give up fighting. His aspirations for his fellow Demon Slayers are almost completely unreasonable.

Tengen’s retirement also underlines Obanai’s commitment to the Demon Slayer Corps’ destiny, sometimes at the expense of others. For example, he regularly ties up lower-ranked Demon Slayers and exploits them as impediments during Hashira Training for unimportant reasons.

Additionally, he believes that the more recent Demon Slayer recruits are inexperienced and incapable of growing. As a result, he is surprised to learn that Tanjiro Kamado escaped the fight with Gyutaro and Daki.

Obanai tends to badmouth or disparage individuals while pointing his fingers at them. Despite how he acts, he truly cares about other people. Both Mitsuri Kanroji and Kagaya Ubuyashiki are his crushes. Based on the presents and meals he gives Mitsuri, Obanai appears to have relinquished some of his excessive surveillance. He became too attached to her to allow anybody else near her.

He seemed to enjoy her company since she was cheery and helped him forget his past. In addition, she made him feel commonplace. 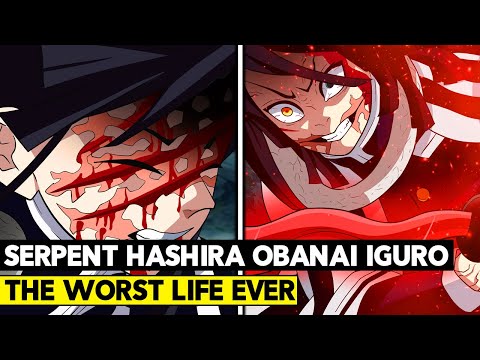 Obanai was born and reared by a family that adored a female snake-like Demon inside a jail. The Demon loved eating kids and had a snake-like face and bottom half of the body. His family offered the Demon’s victims stolen valuables in return for the death of their very own children.

The Demon was particularly drawn to Obanai because he was the only kid with peculiar eyes to be born into the family in 370 years. She spared him till he was older before deciding to eat him. When Obanai was 12 years old, his family made him get his jaw slashed to resemble the Demon when he was carried outside to be introduced to the creature.

The moment he was taken back to his cell, he began to plot his getaway while living in fear and concern. The only person he could rely on was Kaburamaru, a white snake that he regarded to be a personal confidant rather than a pet. He was almost slain by the snake when he eventually managed to flee, but fortunately, the Flame Pillar of the time was able to save him.

When he managed to flee, the Demon murdered everyone in his family, leaving just one cousin alive, who chastised and accused Obanai of being responsible for their deaths. He chose to redirect his anger and hatred against the Demons since he lacked a suitable outlet for his feelings and felt like a more sociable person every time he sacrificed his life for others.

Obanai employs an unusual kind of swordplay that involves attacking ironically and using writhing techniques to bend his swords. Due to his skill with the swords, he could withstand Muzan Kibutsuji. Obanai is among the strongest sworders in the entire group.

Because he is an expert with swords, he was given the responsibility of teaching the other demons how to use and master the same techniques.

Overall Concentration of the Serpent’s Breath 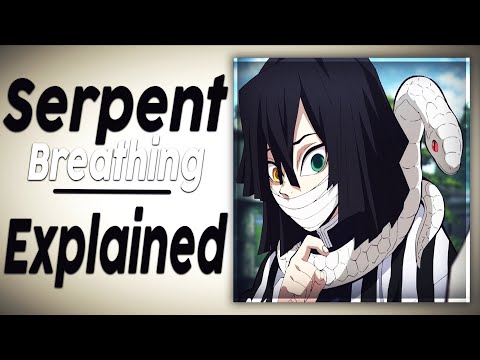 Obanai turns and launches a meandering serpent slash in his first form there next to him.

Obanai’s second form, Venom Fangs of the Narrow Head, allows him to sever a foe’s head from behind with startling speed.

Obanai twists his blade like a writhing snake and rapidly beheads his opponent in his third form, the Serpent’s Spiraling Hold.

Obanai uses his bending blade to decapitate many foes at once in his fifth form, the Slithering Snake, at crazy speeds.

1. The battle between Muzan vs. demon slayers

The conflict takes place in both the insurgent fortress and the demon headquarters. The Hashiras, Tamayo, Tanjiro, and the Demon King himself engaged in this, their first significant conflict.

2. Upper-Rank Four Nakime is up against Mitsuri Kanroji and Serpent Hashira Obanai Iguro

The conflict between Love Hashira and Mitsuri Kanroji and Obanai Iguro vs. Nakime occurs at Infinity Castle. Yushiro takes a stand in the end to help the two Hashira.

Well, that’s all for now about the serpent Hashira. At least you now understand why Obanai carries around the white snake. He can barely do anything without his pet snake. Unlike all the other Hashiras, he possesses a unique breathing style. Humans have their weaknesses. Obanai had a number, including talking ill of others white, pointing fingers, and having an unforgiving attitude.

But above all, he has the human nature of showing compassion to those that matter to him.