After the reveal of the true Upper Rank Demon, the atmosphere has changed and it became much more tense.

Although Daki’s powers were menacing, we were all blown away by how one-sided the battle became when Tanjiro and Nezuko unleashed their greatest powers. Things were going smoothly, and Uzui made the situation even more, assuring for our heroes; however, Daki’s brother has turned the episode upside down and made us all feel threatened by his presence.

“Defeating an Upper-Rank Demon” is the title of the next episode of Demon Slayer: Entertainment District Arc. It will be released on the 30th of January at the following times. For obvious time zone differences, we have listed the hour of release for each region.

You can watch all current and future episodes of Demon Slayer on Crunchyroll and Funimation. Both are very popular sites with excellent quality. They include ads and a few other restrictions, but that can be bypassed with a premium membership.

Not only will you be able to ignore ads, but you can watch Demon Slayer episodes as early as possible. Although it is currently not available on Netflix, it will surely be included later, just like the previous seasons. 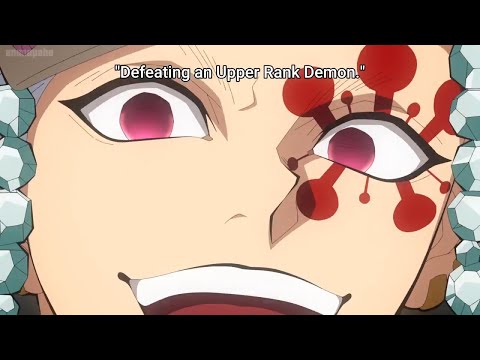 After the powerup Nezuko had in the previous episode, Tanjiro was able to bring her back from her demon form. She ended up asleep to recover the energy she spent during her fight. On the other hand, Tanjiro was still capable of fighting, and he hurried to Uzui’s aid against the two Upper-Rank siblings.

We learned that Daki had devoured 7 Hashiras, and her brother devoured 15, proving that he is stronger than his sister. Their history has been hinted at a couple of times now; it appears that both of them have suffered a terrible fate, and after becoming demons, they seek to inflict their suffering on the living.

Uzui is wounded and poisoned by the deadly scythes the upper demon had. But he stood strong and spoke loud, full of energy to prove that even when the poison runs through his system, it will not affect his strength. Zenitsu and Inosuke have finally joined the battle, and without an ounce of fear, they started battling Daki. Zenitsu struck her with his breathing technique to the rooftop, finally giving us a taste of his strength while being in a sleeping state.

Beheading both of the demons at the same time seems to be the only way to kill them. Having that in mind, Tanjiro and Uzui are resolved to kill the brother, who might ultimately cause Uzui to suffer a painful death with his poison.

The episode ended on a huge cliffhanger; one of Uzui’s wives has joined the fight and fired a huge amount of kunai at the demon. They are not a simple kunai either; they successfully stopped the Demon from generating his limbs, making him vulnerable to Tanjiro to go for the finishing blow.

There are Free Streaming websites available that you can watch Demon Slayer on. You won’t have to pay for a membership, but you will have to wait a few more hours before official websites like Crunchyroll release their episode. Websites like these are full of ads, however, so you might want to use an extension on your browser to avoid them.