With the popularity of demon Slayer 2, upper moon 6 has also attracted the attention of anime fans.

Gyutaro and Daki are two Upper Moon six demons haunting the Entertainment district’s streets for decades. It’s no secret that the flashy and luxurious neighborhood has a dark and violent side that is sometimes overlooked.

On the other hand, high-ranking authorities are unconcerned with the lives of the women who work there, resulting in a high number of fatalities and tragedies that go unnoticed. They despised people so much that murdering them had become an addiction they couldn’t shake.

We’ve gathered all we know about Gyutaro and Daki’s childhood and how they became demons in this section.

Daki was a tall, curvy, pale-skinned woman with soft green eyes and long lashes. She had two pink flower-like demon crests on her face when she wasn’t disguised as an Oiran. She has dressed in fuchsia thigh-high tights with black flower motifs and sanmaiba/Koma-geta/ Mitsu-ashi shoes with three legs.

Daki was a young girl with long, unkempt white hair with messy bangs, pale lipstick, and azure blue eyes with long lashes before she transformed into a monster. Her beauty has been characterized as so stunning that it can make adults dizzy. She dresses in a damaged light pink kimono with uneven square patterns and horizontal lines running through it.

Gyutaro was a crucial antagonist in the Entertainment District Arc of Demon Slayer: Kimetsu no Yaiba. He was a demon who belonged to the Upper Rank of the Twelve Kizuki, which he shared with his younger sister Daki. Gyutaro worked as a debt collector in Rashomon Riverbank for nearly a century until Doma, who was an Upper-Rank Six, immediately transformed him and Daki into demons.

Gyutaro was a big man with a strong frame and a light grey skin with black dots. His eyes were narrow, green and red, with a vivid orange sclera, and were tilted dramatically downwards at the sides. His physique was odd in that his upper chest, arms, and legs were all highly muscular, yet his waist was exceedingly thin.

Ink-like marks in the shape of black patches on his body and running water-like patterns on his face are visible on his body and face. Gyutaro has been noted as having an extremely unattractive appearance.

Gyutaro was dressed in a pair of loose blue slacks and seven pieces of red pattern fabric, one large one somewhere on his neck and three smaller ones, to adorn his body.

AS a human, Gyutaro’s facial characteristics were comparable to those of a demon, particularly the ink-like markings on his face. He had the same odd deformed physique and hair as when he transformed into a monster. His eyes were noticeably bloodshot, and his sclera was a pale blue tone with prominent veins.

The early life of Daki and Gyutaro

Their mother was a staff member of the Entertainment District, and they were also born here. The mother happens to be a prostitute there, and as a result, Gyutaro was born with syphilis and looked ugly, but his younger sister was born beautiful. Daki was named after an illness, “Ume,” by her mother, which was also her original name. Years later, their mother succumbed to the same disease named syphilis while she was just a child. After the death of their mother, they lived a difficult life. Their father is unnamed and was never involved in their childhood.

Gyutaro grew up in a world filled with sadness, despair, poverty, and every dreadful human feeling. Gyutaro felt unafraid of his ugliness, despite being the sad and filthy monster everyone despised. He gradually shed his sense of inferiority with his lovely sister at his side. Ume (or Daki) quickly rose to prominence in the Entertainment area and was tipped to become a wealthy oiran in the future.

Since their parents were no longer present, Gyutaro saw it best always to protect Ume at all costs. He also taught her a few survival skills to help keep her safe. Later, a samurai pursued Daki, but Daki poked him blind, and she was tied up and burned with severe burns on her skin. Gyutaro killed the samurai and tried to find a doctor with Daki on his back.

Gyutaro, on the other hand, was a skilled fighter and went on to become an arrogant debt collector. Things, however, did not go as planned.

How Daki and Gyutaro became demons

Ume slashed her client’s eye with a comb one awful night for prolonging her payments. When Gyutaro came, his dying sister’s burned body was all he found. He assassinated the perpetrator right away, but it didn’t replace the irreparable gap in his heart. 6 demons on the Moon’s Upper Side As demons, Doma granted them a second opportunity.

Gyutaro hated the Gods for robbing him of the only person he held dear. He assassinated the perpetrator right away, but it didn’t replace the irreparable gap in his heart. There was not a single person who came forward to help them, which is cause enough to hold a bitter resentment towards this uncaring race. It began to snow, and not even the weather was kind to them in their final hours.

When they thought they’d lost it all, the Upper Moon 6 demon Doma appeared and offered them a second shot as demons. He offered his blood to Gyutaro and Daki, making them into powerful monsters that quickly ascended to the ranks of the 12 Kizuki.

They were not turned into demons directly by muzan. Still, they met upper moon 2 — Douma, a brother, and sister who were tricked by fate, so calmly accepted to become demons, and then kept changing their identities for hundreds of years—lurking in the flower street, specializing in eating those beautiful women. 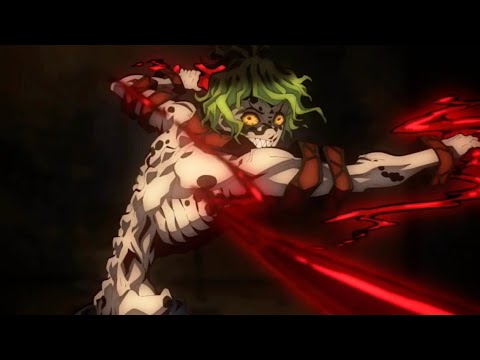 Daki’s Blood Demon Art enables her to construct Obi sashes out of her flesh. Her straps are silky smooth but razor-sharp, like most Nichirin Swords. Because of their softness, they are challenging to cut. She has complete control over them and can manipulate them at will.

She has also demonstrated the capacity to command her Obi from great distances.

Daki’s Blood Demon Art was an incredibly efficient combination of offense and defense. Her strong slashes can reject and prevent Tengen’s explosives and quickly destroy buildings. She utilized her Obi sashes as powerful and quick thorny vines whips to unleash long-ranged intertwining strikes while also being able to use them to form a shield around her body if needed.

Daki could keep items in her sashes, mainly humans. This allowed her to travel quietly since any opening large enough for a strap to go through is one she may enter. To release someone stuck in the waistbands, one must tear it apart while being careful not to hurt the imprisoned person.

Gyutaro’s Blood Demon Art enables him to manipulate the blood in his own body in various ways. In battle, he frequently releases barrages of solidified sickle-shaped blood that move at incredible speeds and are as sharp as knives. He appears to create them from his own Kama or open sores on his body.

Gyutaro can also generate a blood shield in the shape of a dome, which he utilized to protect himself from a barrage of kunai, demonstrating its incredible endurance.

Gyutaro can also unleash lengthy spherical torrents of razor-sharp blood that may quickly demolish the environment.

Having looked at the early life, appearances, and demon art the two characters have portrayed, we are glad you now have oversight of the two demons.

If someone were to ask us, we’d rate Daki and Gyutaro at 9/10 because they have been portrayed well. They both have unique abilities and serve different purposes. I hope you enjoyed it enough to leave us feedback on the same.