All You Need to Know About Water Hashira [Giyu Tomioka]

Slashing everything and everyone in route, Giyu dances in a beautiful rhythm while swinging and bending the sword in a loop..

The current water hashira is also known as Giyu Tomioka.  He is one of history’s most powerful swordsmen. He is an ex-disciple of Sakonji Urokodaki (the former Water Pillar)and employs the water breathing technique. Keep reading and you might just find out some of his skills, personality and great combat record.

Giyu is a tall, lean young guy with a pale face who usually always exhibits a solemn look. He wears his unkempt black hair, which is irregular in length and sticks up in spikes all over his head, backward in a low, unkempt ponytail at the bottom of his neck. His fringed bangs cross  his eyes unevenly. His eyes are piercing and somewhat big, with bluish-black pupils and deep turquoise irises. His dark eyebrows outline his eyes perfectly.

He is dressed in a dark cyan-tinted variation of the normal Demon Slayer costume, which includes a pair of white zori with royal blue straps and socks below that are the same cyan hue as his uniform. He also has buttoned white foot kyahan.

Later, it was discovered that the haori were his late older sister’s Tsutako Tomioka and the late companion Sabito. Giyu covers the split with a haori that is divided in half, with the right half being solid red and the left half being made up of squares of mixed colors: yellow, green, orange.

Hashira Giyu is a quiet, modest guy with a strong sense of fairness. H e surprisingly has no patience for people who disregard their own boundaries and risk their lives.

He saved Nezuko Kamado from Shinobu’s attempt to murder her. Even though he went against the Demon killer Corps regulations. This suggests that he does not really hate demons like many other Hashira do and is prepared to spare a demon as long as they don’t massacre and consume people.

Shinobu Kocho believes that Giyu Tomioka is despised by many people. Despite this, he doesn’t give a damn what others are saying about him. Giyu doesn’t appear to react in any way when notified of the deaths of Genya Shinazugawa, Muichiro Tokito, and Kyojuro Rengoku, indicating that he tends to be selective about who he expresses feelings for.

Even though he has a brotherly sort of bond with Tanjiro, Giyu is the first to say that they’ll need to kill him when Tanjiro starts attacking as a demon. In doing so, Giyu Tomioka shows that he doesn’t let his personal life interfere with his work. 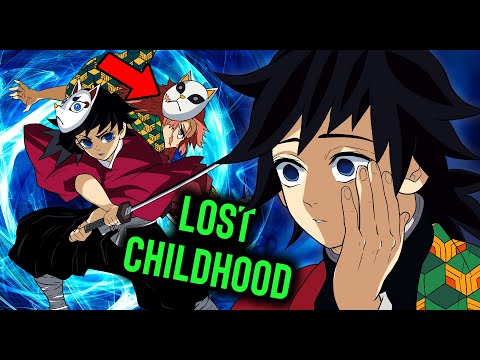 Giyu is an orphaned child whose family was murdered by demons. Before his elder sister Tsutako’s marriage, she makes a life-or-death decision to save Giyu, which puts him on the journey to become a Demon Slayer.

Later, he occupied the position of the Water Pillar after becoming Sakonji Urokodaki’s student. When he rescues Tanjiro Kamado from his demonic sister who was about to consume him.

Giyu understands how special these siblings are. He chooses to lead them to his former tutor Sakonji in order to demonstrate Tanjiro Kamado’s path as a Demon Slayer rather than finishing his duties as a Demon Slayer.

But when he was participating in the selection, his teammates were killed, and he was powerless, which deeply affected him and made him silent. language. Later met Tanjirou and introduced him to training with Urokodaki Sakonji.

One of the strongest and most talented swordsmen in the entire enterprise is Giyu, a Hashira of the Demon Slayer Corps. Akaza the upper Rank Three, who has battled innumerable swordsmen in the past, was amazed by Giyu’s abilities and said that he had finely refined swordsmanship.

First form: His velocity is sufficient to produce a potent single focused slash.

Second form: He leaps and swirls vertically ahead in the air while letting out a flowing strike that moves round and round.

Third form: Slashing everything and everyone in route, Giyu dances in a beautiful rhythm while swinging and bending the sword in a looping manner alongside his body.

Fourth form: Executes a series of quick cuts while flowingly bending their body and blade to strike many targets at once.

Muzan: Lost his right hand in the final battle with Muzan, but survived.

Nezuko: almost killed him but chose not to.

When he was 13 years old, Giyu had already seen his elder sister and Sabito risk their lives to save him. His mental health suffered greatly as a result.

It seems sense that he would have constantly questioned his abilities and his right to the rank of Hashira if anything like that were to occur. Tomioka’s refusal to train with other Hashiras throughout the Hashira Training storyline amply demonstrated this uncertainty.

It may be a very difficult existence to live with shame and self-doubt. The fact that Giyu Tomioka felt out of place there may have been the primary factor in his decision to isolate himself.

He believed that rather than his own efforts, becoming a Hashira was made possible by Sabito’s and, to a lesser extent, his sister’s. To avoid mingling with everyone in Demon Slayer, Tomioka likes to stick to himself.

Hopefully you’ve gathered enough information on the water hashira. If not, feel free to ask us anything on the same.