The Best Morgana Skins in League of Legends (All 10 Ranked)

Morgana has many players, and she has many wonderful skins that often appear on the court, I can’t wait to get my hands on

The fallen – Morgana was born into a conflicted world along with her twin sister, Kayle, where humans were fighting over the runes of this world after they learned how to use it. Morgana and Kayle were born from an aspect vessel, originally from mount Targon. Morgana and Kayle had clashed after a conflict they had together, their clash had caused chaos and destruction upon their city.

This has caused Morgana to resent her heritage and powers, so decided to cut her wings but she never found a blade strong enough to do so, instead, she bound them with iron chains, bounding herself to the world of mortals, to embrace humanity.

Morgana is a mage/support champion that seeks to cripple her enemies with her abilities from a long and close distance. She is considered to have one of the longest chain crowd control in the game all by herself.

Riot has released 10 skins for Morgana, we will be ranking the best skins for players to look into 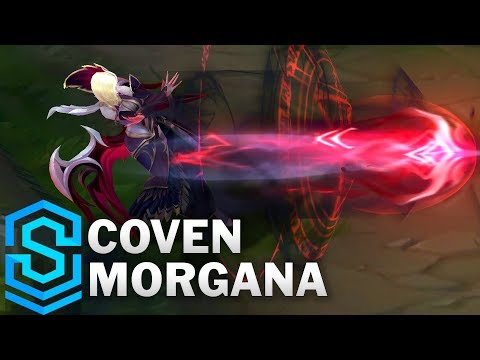 Queen of the coven, Morgana’s beauty and grace is shown to the mortals as she seeks to end the reign of mankind after the slain of her beloved Old Gods, wishing to return the world’s true rulers to their rightful place. Coven Morgana offers a voice filter, new voice, new SFX/VFX, new animation, transformation and a set of chromas. There is no doubt that Coven Morgana is the best skin made for her, players are given the ability to witness Morgana transform on various occasions.

Her appearance is worthy for her to be called the Queen of the coven. Morgana’s Q binds her enemies with its Crimson colour and crows effects, and her W casts an elegant shadow on the ground that grows small red roses before withering away, her E shields herself or her allies with it’s beautiful crimson color before Morgana finally chains her enemies with her ultimate, transforming into the ultimate Queen of the coven as her spirit is unleashed above her, stunning them all after few seconds. 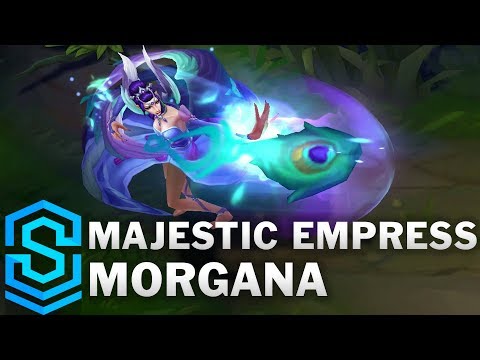 Queen of a heavenly kingdom, Majestic Empress Morgana follows the stories of the divine skin lines, in which Morgana had witnessed Irelia seal away the power of a dragon. Trying to figure a way to return that power, Morgana learns that a young Demigoddess had hidden that power away. And now, it was her task to return that power to where it belongs.

Majestic Empress Morgana offers new SFX/VFX, new animations and a set of chromas. Just like the title of the skin, Morgana is dressed majestically like an empress with beautiful accessories that shows off how colourful her dress looks. Her Q binds her enemies with a majestic colour that matches her beautiful appearance.

Morgana then flies and chains with her ultimate, stunning enemies around her in a majestic fashion. 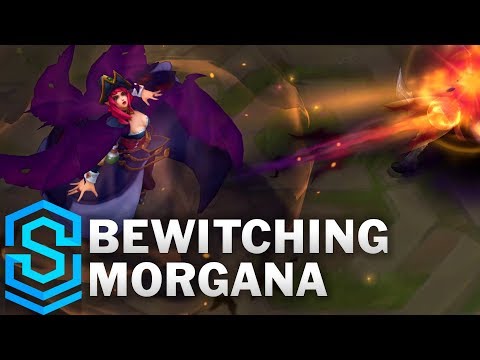 Morgana celebrates Halloween with her new witch custom, however she is not pretending to be a witch. Bewitching Morgana uses witchcraft to fight her enemies, this skin offers new animations and new SFX/VFX, her Q binds her enemies as it leaves a trail of bats before spreading those bats away on impact around the target.

Her W casts a shadow which unleashes more bats above it, and her ultimate move chains enemies as she flies using her bat-like wings on her back to stun her enemies. This skin is only eligible to be obtained from loot and can’t be purchased directly, making it difficult to get compared to the other skins. 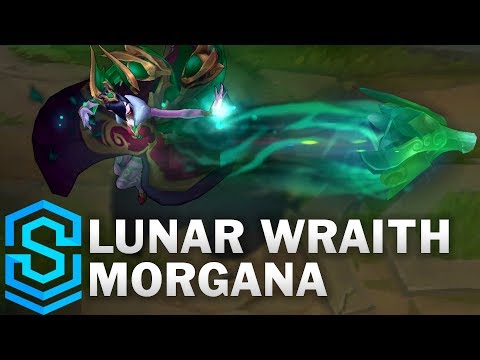 Appearing during the Lunar Revel, Morgana captures the mind of her enemies before grabbing their spiritual life away to a nightmare where they won’t ever be heard of again. Lunar Wraith Morgana offers new SFX/VFX and new animations. Starting with her recall, Morgana uses her fang-shaped nails to throw swings of scratches before she would howl like a wolf until she is sent back to base.

Morgana binds her enemies with her Q by unleashing a wolf-shaped ability that roars until it hits the target, turning from green to red upon impact. Morgana uses her fancy green-feathered wings to fly as she binds herself and her enemies around her before crippling and stunning them, dealing massive magic damage. This skin is only eligible to be obtained from loot and can’t be purchased directly, making it difficult to get compared to the other skins. 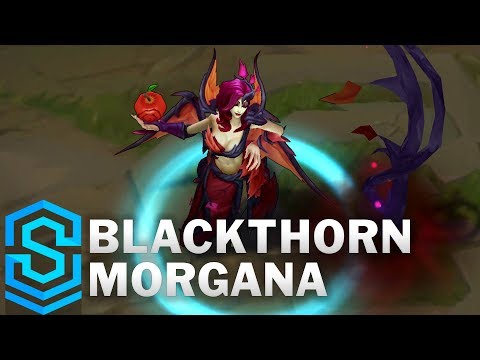 In a dark deep forest, Morgana guards a magical power against those greedy enough to try and claim it for themselves. Even though this power was to be taken as an evil entity, Morgana decided to protect it and hide it inside of her own body, binding it with her soul so only she may use it.

This skin offers new SFX/VFX and new animations. Morgana’s appearance in this skin can be found similar to Zyra’s, Thorny black vines kept around her as she uses them to attack her enemies and her wings are leaf-defined which is quite suitable for her appearance.

She Binds her target by sending a thorny plant enchanted with her dark powers to cripple them in place, Morgana casts a shadow on the ground to burn their enemies with its dark thorns before they find themselves being chained with her ultimate, a magical strong thorny vine connecting them with Morgana. 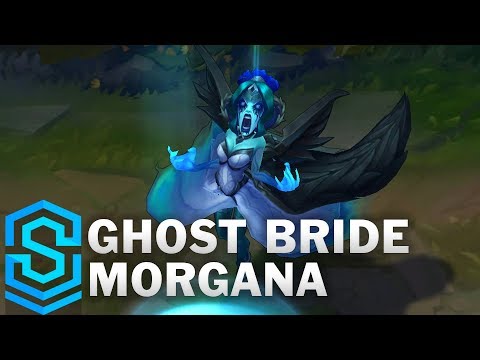 A weeping bride, looking for her husband, Morgana appears in an undead form, dressed as a bride and having a weeping expression with a bit of ruined make up as she takes revenge upon the living for having her happiness ruined. Stories are told that those who meet the “ghost bride” are never heard of again and never to be found.

Ghost Bride Morgana’s abilities don’t have much visual changes compared to her classic skin, but the particles and effects definitely match her undead theme and ghostly presence. This skin remained a fan favourite for many players compared to the others, especially for those who are interested in ghost entities. 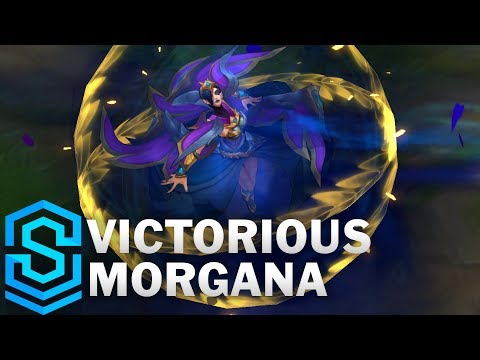 Victorious Morgana was put as a reward to players who reached Gold or higher back in season 2014. In deep blue armour and a victorious appearance, Morgana fights her enemies in a wonderful dress that shows off her royalty with her blue, purple and golden colours. Her effects are completely matching with her appearance as they have mixed colours of gold, blue and purple.

This skin offers new SFX/VFX and new animations, While the effect on this skin is comparable to her classic one, Victorious Morgana is an exclusive skin, and now it can no longer be obtained for players. Owning this skin is considered quite lucky. 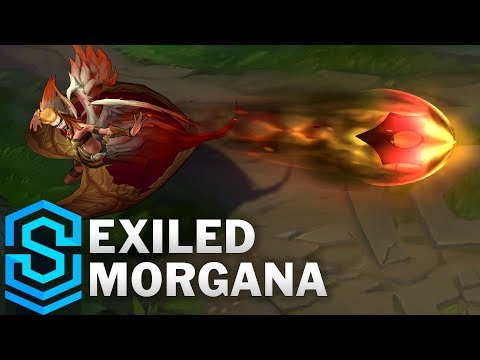 Exiled from her tribe, Morgana plans her revenge on those who betrayed her and their bloodline for years, each passing season she finds herself coming closer and closer to her goal where she seeks to hold a battle that will cause her tribe to fall, as well as her twin sister Kayle.

Exiled Morgan only offers new SFX/VFX, the effect of her abilities is fairly similar to her classic skin. Dressed like an aggressive battle tribe, Morgana unleashes her revenge on her enemies, binding them with her Q which shows orange and red particles, these effects are also present during her ultimate as she binds her enemies. This skin is only eligible to be obtained from loot and can’t be purchased directly, making it difficult to get compared to the other skins. 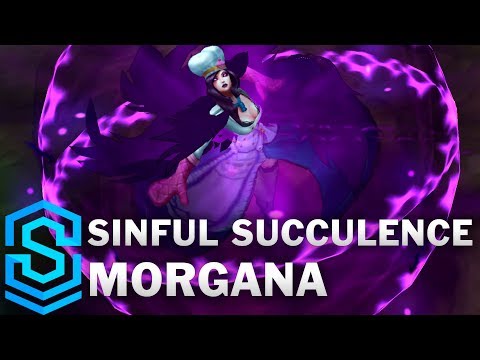 Dressed as a Culinary Chef, Morgana tries out her culinary skills in front of Master Chefs, trying to present her best sugary-sweet dish, hoping that they won’t criticize it unless they long for a taste of her powers! Which they probably will since she probably used it to make her dishes.

This skin doesn’t offer any new particles or sounds and it is only eligible to be obtained from loot and can’t be purchased directly, making it difficult to get compared to the other skins. But for those who would love to associate themselves with cooking and food, Sinful Succulence Morgana might be the skin for you. 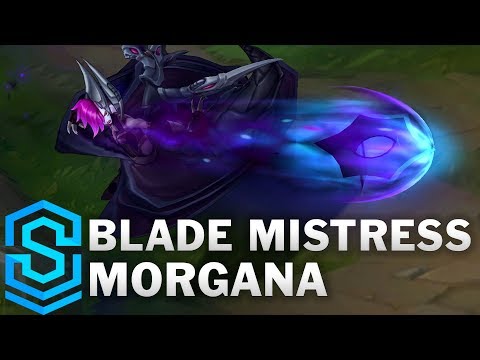 A deadly combatant as well as one of the last half-aliens alive in the galaxy, Morgana hides her prohibited technology beneath her skin as her main goal is to avoid her sister, Kale, who has completely fallen to her own false sense of justice where she keeps lying to herself no matter how many mistakes and actual crimes she would commit.

This skin doesn’t offer new particles or sound effects, but it has a very intriguing theme and look. Players would like it if they wanted to play with classic morgana’s effects but in a different theme, an alien galactic theme.