What Does SMH Mean On Snapchat? (And More Text Acronyms)

If you haven’t been around in the social media space for a while, words such as SMH and OMFG can be quite confusing. What could they possibly mean? Worry not; this post will get you up-to-date on the latest Snapchat slang.

Navi.
What Does SMH Mean on Snapchat?
When Should I Use SMH?
Other Popular Phrases On Snapchat
ROFL
OMFG
AMA
IMHO
TL; DR
ICYMI
Bottom Line

Without slang and emojis, texting would be a very boring exercise. As a result, people have come up with slang specially made for texting. If you are a parent, you might feel like, at times, you need a translator when talking to your young teenagers. Worry not; texting slang isn’t that hard to understand. In this post, you will learn the meaning behind famous slang words on Snapchat, such as SMH, OMFG, ROLF, and many more.

What Does SMH Mean on Snapchat?

If you are new to Snapchat, SMH can be a very confusing initialism. If you do not know the meaning, you may not know how to respond to the text or, even worse, send the wrong response.

In social media apps and chat rooms, SMH means Shaking My Head. It is commonly used to express disbelief or disappointment about something wrong or stupid. There is a high probability of you shaking your head when using the initialism.

Generally, SMH is a way to express your disbelief without writing more than three letters. At times, however. The initialism is used together with some text. For example, “SMH people don’t know how to wait.” When used this way, it shows you are annoyed by whatever is included in the text.

Before its adoption in Snapchat, SMH was largely used on other social media platforms such as Facebook and Tumblr. Google Trends shows that SMH had its peak usage in 2011. Since then, people have been using the initialism less often.

Even though so little is known about its origins, the phrase has become one of the most popular ways for people to convey how they feel. After it was added to Urban Dictionary in 2004, the initialism became increasingly common in the texting vernacular.

When Should I Use SMH? 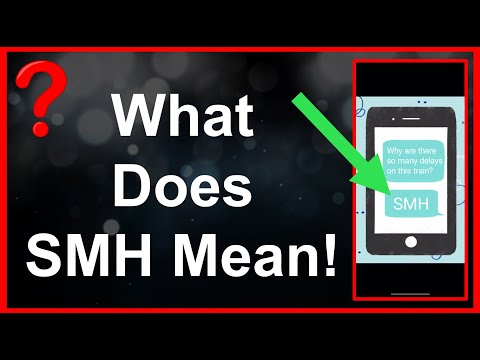 If you are in a situation making you physically shake your head, it’s the right time to use SMH. There aren’t many rules as to how to use the phrase. Additionally, the phrase doesn’t carry any other meaning (at least in the texting slang), so you don’t have to worry about sending ambiguous texts. The phrase can be used whenever you are in shock, disbelief, disgust, or disappointment.

Tip: If you want to take your texting experience to the level, you can use the initialism together with an animated GIF—your friends will appreciate it.

Other Popular Phrases On Snapchat

SMH isn’t the only initialism people use when chatting. There are so many that deserve their dictionary. Some other popular abbreviations include ROFL, OMFG, ICYMI, TL, DR, LMK, and IMO. Let’s look at them in detail.

ROLF stands for “Rolling ON Floor Laughing.” This slang shows that you are laughing at the top of your lungs. It can be used in response to a funny text or snap. ROLF can be used in place of other acronyms such as LOL and LMAO. LOL, for instance, is overused and has loosed its shine over the years.

OMFG is not as popular as the other acronyms. It stands for “Oh My Freaking God.” It shows that you are either frightened or stunned by a particular snap. It is used in the same way as OMG, conveying a more intense feeling. The acronym is similar to other acronyms, such as OML (Oh My Lord).

AMA stands for “Ask Me Anything.” Even though the acronym was not popular in the early days of social media, it has become one of the most used slang nowadays. As you may guess, it is used to assure people that they are free to ask questions.

IMHO stands for “In My Humble Opinion.” It is used to communicate your opinion to someone who might have a different view. Using it shows that you are not undermining someone else’s feelings and convictions. It is an excellent alternative to IMO (In My Opinion).

TL; DR stands for “Too Long; Didn’t Read.” You can use it to show that a certain post or email was too long. Therefore, you will most probably use it together with a link. It is also one of the less used abbreviations when chatting on Snapchat. You can use it in uppercase or lowercase.

ICYMI stands for “In Case You Missed It.” As you can see, that’s a very long text on its own, thus the acronym. It’s used to point out something interesting that has only recently happened. The acronym is popular on all social media platforms, especially Twitter—due to its character limitations.

Texting slang makes texting more fun. Now you know the meaning behind the popular initialisms such as SHM (Shaking My Head), ROFL (Rolling on Floor Laughing), IMHO (In My Humble Opinion), and AMA (Ask Me Anything).

You do not have to worry about grammar when using these acronyms—they can be placed anywhere in a sentence. Always make sure you know the meaning behind an acronym before using it.