The 10 Best Anivia Skins in League of Legends [All Ranked]

The Cryophoenix – Anivia, is a kindhearted spirit who undergoes endless cycles of life, death, and rebirth just to keep Freljord protected.

She is a demigod born of ice, wielding elemental powers to prevent anyone from disturbing her homeland. Anivia is also the sibling of the other two demigods, Volibear and Ornn. Anivia is looked upon as the symbol of hope by her people, knowing that they will be unharmed. Anivia fights her battles knowing that her sacrifice won’t be meaningless and will be reborn after death.

Anivia is a ranged battle mage that uses ice magic to attack her enemies. The Cryophoenix is good at creating space and fighting from long range. Her abilities allow her to provide crowd control for her team while also dealing lethal magic damage to her enemies. Her massive ice walls prevent her enemies from escaping, making her quite troublesome to deal with.

There are ten skins released for Anivia since she was published: 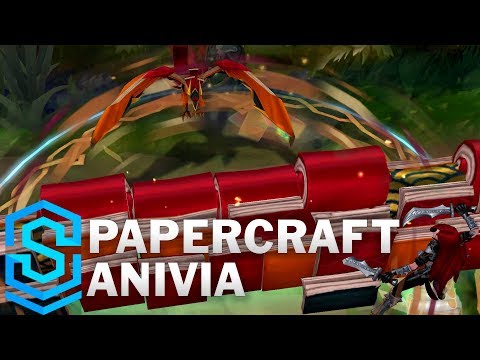 Our favorite ice phoenix has become a gorgeously looking paper phoenix! Anivia has a colorful paper body of orange, red, green, and gold! When Anivia is killed during the battle, her passive activates, allowing her to be reborn again and to hatch from her brown-paper egg. Anivia’s basic attack sends one of her red-paper feathers at her target, creating a paper sound-like effect.

Her Q shapes a large dark red star that stuns enemies in its radius while creating a beautiful red trail behind its path. Anivia’s W summons a massive wall of books! Knock all units away from it and last 5 seconds. Anivia’s E sends a magical white paper bird that deals double damage if they were hit by her Q or R.

Anivia’s ultimate is on a very short cooldown, unlike other ultimates in the game. Anivia creates a large radius of book storm, slowing anyone caught inside and slowly damaging them with her sharp flying papers! 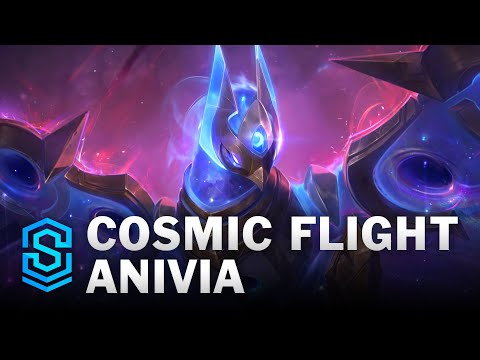 Cosmic Flight Anivia is an ancient being that gives birth to even galaxies! Her body is made of pure energy and strong golden armor that makes her intimidating. Anivia is reborn; her orb spirit slowly falls to meet the egg, creating a cosmic impact. Her basic attack sends sharp and powerful features filled with galactic energy.

Her Q sends a giant orb with a purple orb with blue fields swarming around it; those who are hit by it are stunned for a short time. Anivia’s W creates a large wall made from the same armor that shapes her body, an indestructible object that traps her enemies. Anivia’s E sends a large cosmic feather filled with ice magic that leaves stars behind it! Frostbiting her enemies to trounce them!

Her R creates a large radius of an entire galaxy! Raining stars and orbs on those unfortunate enough to be trapped inside it, slowing them down and showing them her true powers. 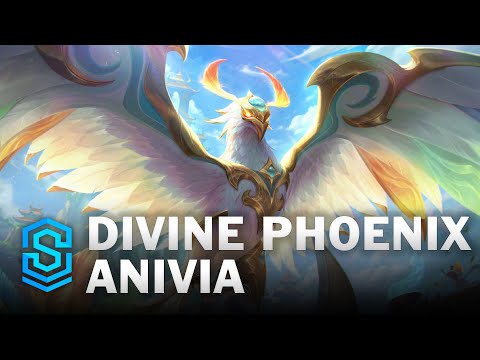 Anivia is a godly being descended to aid those who help others with bravery and kindness. Her marvelous appearance captures the eyes of all who meet her. Divine Anivia is a white phoenix with colorful feathers and beautiful golden edges, and a golden face. Anivia’s passive allows her to be reborn after death; a colorful feather with a golden aura slowly descends in a celestial way to Anivia’s blue egg for her to be resurrected.

Anvia’s basic attacks send an aquamarine-colored feather at her enemies, dealing magic damage to them. Anivia’s Q sends a chunk of celestial energy that shatters beautiful feathers once it hits an enemy. Her W creates a strong wall of fine stone that produces a beautiful warm aura with birds singing above it. Anivia’s E sends one of her most giant orange-colored feathers at her enemies before it starts blazing in the air!

Anivia’s R creates a large radius on any space chosen; the edges are shapes so that it beautifully describes Aniva’s divine feathers. Inside the radius are hailing feathers that damage those who are inside it. 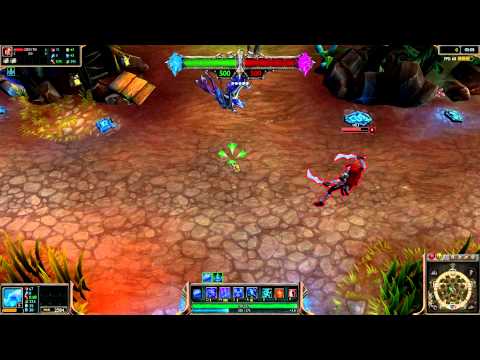 Anivia is consumed by dark power. Her appearance has changed into a dark version of her former self. Her wings are made of black ice, and her face is covered with spiky silver armor. Her eyes are glowing blue, and an ice horn on her peck is pointing up. Anivia’s Q sends a large chunk of spiky black ice that explodes when it hits an enemy. Her W creates a giant wall of spiky ice, trapping her enemies and knocking them away from it. Her E sends a vast ice spike that frostbites her enemies.

Her ultimate creates a ring covering a vast space, filling it with an ice storm that sends spiky black frost and dangerous hail inside. Those caught inside would be frozen to death if they didn’t fall by her deadly ice. 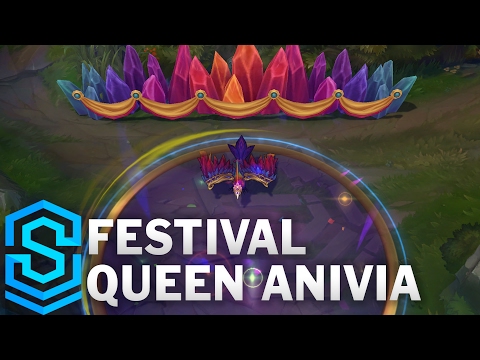 The Cryophoenix – Anivia has taken a break from being an ice phoenix, and she traveled into warmer locations to celebrate festivals with her people. Anivia is wearing a golden crown with red jewelry engraved into it. Her purple eyes can be seen through her white mask, while her feathers have become colorful and soft with bright red and purple colors.

Anivia is returned to life when one of her spiritual feathers starts descending into her dancing golden egg to the playful drums in the background. Her auto attacks send a sharp pink feather. Her Q generates a large chuck of pink ice that stuns her enemies, shattering into festival-like particles.  Her W creates an ice wall of various colors, decorated with festival curtains at the bottom. Anivia sends a large bright feather with her E to a single target.

Her ultimate is all about celebrating festivals as she summons a storm in an area, sending down her colorful festival feathers inside the ring. 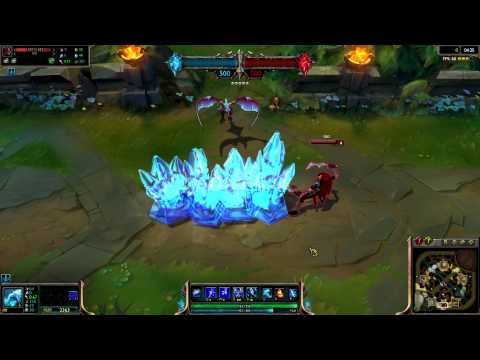 The ice-feathered phoenix that we used to know has become featherless. A Pterosaur creature that can manipulate ice fields. Her dark skin mixed with the fading blue ice on her body matches with her bright ice claws. Her basic attacks send a small ice spike to an enemy.

Her Q creates a large chunk of spiky blue ice that stuns its path. Anivia summons a wall of ice to trap her prey and hunt them down. She sends a vast and long ice spear that pierces her target to deal massive magic damage. Her passive is a cracked egg gently placed on green leaves; Anivia’s blue eyes can be seen through the egg.

Lastly, Anivia creates a large storm to slow down multiple targets, allowing her to easily hit her abilities as snowstorms with spiking ice on that inside. 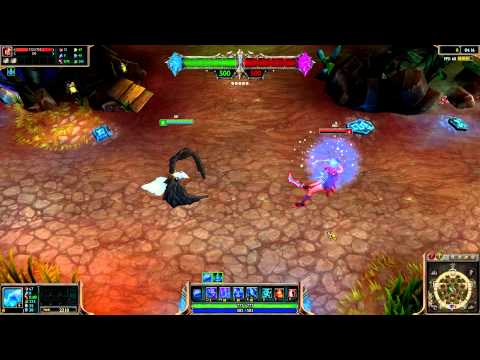 Anivia has become a lethal eagle that feeds on those who dare to attack her nest. With the power of ice magic still, by her side, Anivia starts damaging her target by launching small sharp ice projectiles. She then sends a medium radius of lethal ice to stun them, making it easier to get closer.

Her W summons an ice wall, keeping them away from running or protecting herself if the target was too dangerous to attack. Anivia uses her Cryophoenix power to create a sizeable sharp rod of ice and sends it fast at her target with her E.

Her ultimate change is the climate and creates a hail storm; though she is an eagle, she still excels with her phoenix power. She slowed down her enemies with her R and finished them off with her E. 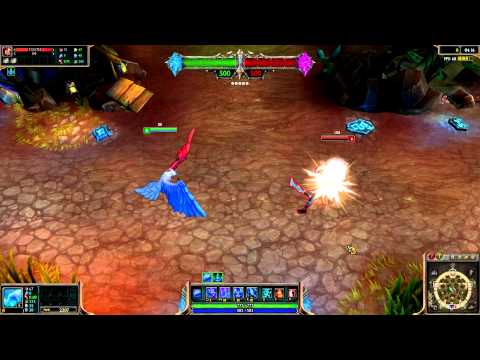 Her Q consists of large chunks of ice put together to form a sharp projectile that harms and stuns those hit by it. Her W creates a wall of spikes that are too cold to touch! Those who are hit by it get knocked away and slowed down. Her E is sent once she realizes her side is starting to lose; a significant blue ice spike deals double damage if her target is hit by her Q.

For her cheering team, Anivia generates an ice storm that slows down the obsessing side, raining down hails of lethal ice that freezes them. 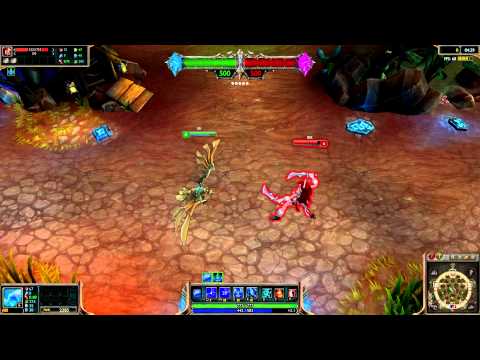 Perhaps after being unable to resurrect as a Cryophoenix, Anivia has turned into a Hextech life form. Her body consists of fully olive-colored steel objects and tools created by mortals. Her eyes are shining blue, generated by the Hextech energy that travels inside her body.

Anivia fights for mortals, sending large projectiles of ice with her Q to stun the invaders and damage them massively. She blocks the path of her enemies to protect her people by summoning an ice wall with her W. Her E is locked upon a single target that will be pierced by a significant spike of blue ice.

Using the Hextech life form inside her, Anivia controls the weather and creates a hail storm in a large area, dealing magic damage and slowing anyone inside. 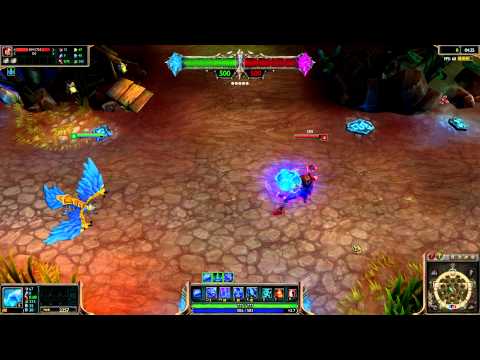 Noxus had always been a troublesome country to the neighboring kingdoms. It had always sought invasions upon other lands. After attacking Freljord, Anivia could not stand still anymore. The Cryophoenix prepares for war as she puts a divie golden armor on her freezing body, with a helmet with black horns on its sides.

Hunting down noxians, Anivia strikes them with her icy feathers as her basic attacks. Her Q generates a giant frozen orb that freezes enemies inside its radius once it shatters. Her W walls off the noxians escape from the demigod Anivia, knocking them back and causing them to panic. Her E is a powerful ice pike that instantly kills those who dare to fight her back.

Once her enemies are gathered in one location, Anivia creates an ice storm that rains spiking hails on her enemies, slowing them and freezing them to death.