The Dreadnought – Urgot, was originally a Noxian commander, and just like every other Noxian commander, he was cruel and brutal. Urgot has killed countless lives for Noxus, but he never had thought he would be betrayed by his own homeland. Left in a prison cage, deep underneath the city of Zaun, he understood the true meaning of strength. Urgot became a weapon, half his body being a machine with crab legs and chainsaws, a terrifying figure for his enemies.

In League of Legends, Urgot is a Top Laner. He is one of the few Top Laners that are ranged, but his range is extremely short compared to Marksman and Mages. He is also extremely beefy, allowing him to take lots of damage while also dealing lots of damage.

Urgot is more suitable for taking out a single target since most of his abilities revolve around one enemy. But anyone caught in his passive can have their health bar easily melted. 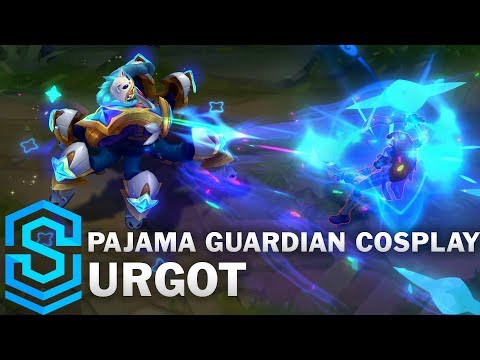 Urgot is cosplaying as Ezreal’s bird companion in the Star Guardian universe, being dressed in a blue onesie, with a hoodie or a white cat. He might look cute, but his words are still cruel. His passive and auto attacks are amazing blue shots that leave sparkling particles like fireworks. His Q shoots his cat companion on a target location, indicated with a big Star Guardian Star. His W reveals a blue indicator around Urgot with smiley cat faces.

His W shoots blue bubbly bullets that leave falling rainbow stars from his gun. His E is a dash that shields him with colorful colors. His Ultimate shoots a golden star, queueing the Star Guardian soundtrack before pulling them to Urgot and having pink tapes cover the player screen. 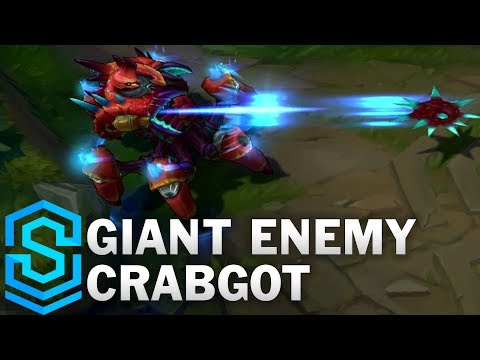 One of the best-reworked skins in the entire game. Urgot’s previous design was completely ugly alongside his skins. After his rework, a 10+ years skin became better than most modern skins in League of Legends. Urgot became a badass monstrous crab creature. His hands have turned into huge crab claws, and his legs are the walking or swimming limbs. From each limb, a flow of energy can be seen coming from it.

His eyes have a piercing blue gaze through his shell that hides his face. His auto-attacks shoot a small blue bullet from his claw. His passive unleashes a massive wave of blue bullets from crab claws on a target. His Q shoots a spiky shell that explodes, leaving a mist of blue smoke to evaporate. His W activates his rapid-fire coming from his claw, shooting blue bullets until it deactivates.

His E generates a dark blue shield, fitting for a sea creature. His Ultimate shoots a sharp cyan object at a target; if they are hit, they will be pulled to Urgot using his crab organs before crushing them into a blue mess. 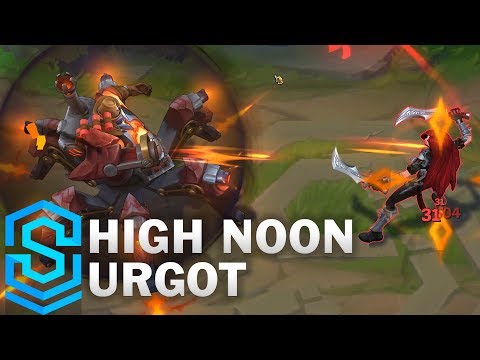 A cowboy hat. A Huge machine gun in his right hand. A front body that looks like a furnace for the flames of hell. High Noon Urgot is one of the best High Noon skins in the game. His crab legs are producing constant smoke from the heat of his body. His red eyes are terrifying, and the face mask he wears to cover half of his face is enough for anyone to know he is not a friendly or a nice person. His passive sound effect is the best one throughout all of his skins.

Hearing the sound of the flame exploding against his enemies is very satisfying. His Q throws dynamite before it explodes into a raging fire. His W activates his machine gun and starts shooting flaming bullets at a fast pace, his target will be marked with an orange crosshair.

His E shields him with a black shield to block enemy damage. His R shoots a huge black bullet in a direction, if it hits the target, they will be marked with train rail around them, the rail will burn out and act like a timer until they are pulled into Urgot’s lava and be killed while a loud sound of a train is made. 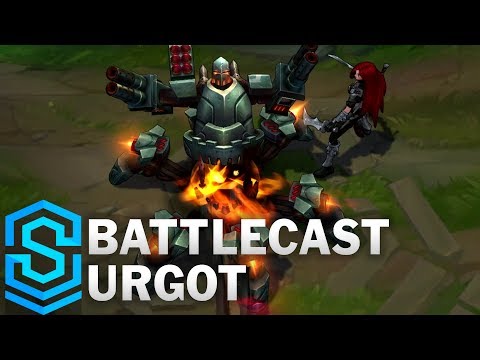 Battlecast Urgot is not the best creative skin out there. Players don’t have to look twice to find out if this skin has more to it than its appearance. He is simply a war machine, with guns and weapons all around his steel body. He has rockets on his shoulder, and his hands have 2 long firing cannons. His auto-attacks and his passive shoots a wave of bullets. His Q fires two of his rockets that detonate after a delay. The area affected will be marked in a red indicator.

The explosion caused by it looks quite nice and realistic to the weapons that our modern military has. His W activates his machine guns, and Urgort will start glowing with a red aura. The target he is shooting will be marked with a red circle. His R fires a sharp and large metal object at a target direction, if hit, a red bar around them will appear and start counting down before they are pulled into Urgot with his chains to get melted with the fire inside his body. 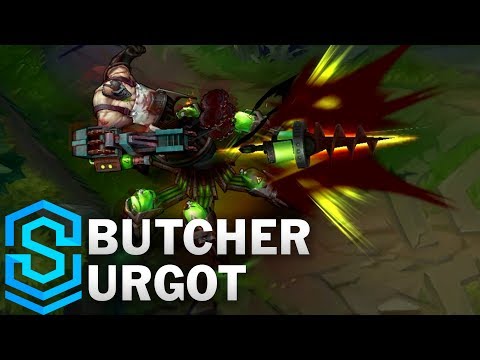 Unlike his other crab skin, Urgot did not receive lots of visual love with this one. He is seen wearing an apron that is stained with filth. His legs are empowered by chemtech cores, placed and protected behind tough glass. His whole character model has been changed, however, so for 520 RP skin, this one deserves a high spot in terms of skin quality. His auto-attacks fire bullets empowered with chemtech technology.

His W shoots poison whenever his passive is activated alongside the rain of bullets coming from his hand. His Ultimate fires to catch a low health enemy and pull them back to Urgot with his black chains. The enemy will be butchered inside Urgot’s body where he keeps massive chainsaws that are stained with blood.