The 12 kizuki are by far the most legendary devils in the Demon Slayer. These demons, selected by the Demon master Muzan Kibutsiji himself, oversee their master’s wishes in maintaining a chain of authority among the demons. These demons, who are also referred to as the 12 demon moons of the anime Demon Slayer, are the second-highest ranking members of the demon hierarchy after the original warlord.

Muzan’s blood can turn people into demons. A diehard Demon Slayer  fan may be aware of this notion. The demons that have gotten substantially more blood from Muzan also grow to  become powerful and stronger than others, eventually reaching the 12 demon moons positions in Demon Slayer. Their master’s blood will be richer and thicker, and the more potent as they get stronger, which will also increase their skills and abilities. 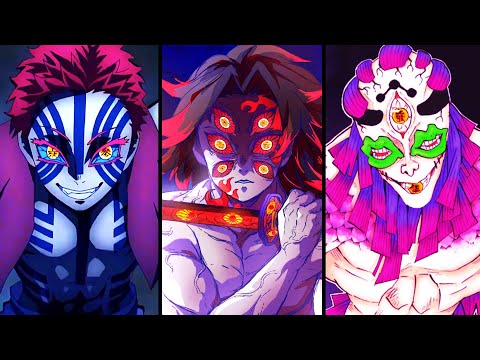 The top-tier Demons under Muzan Kibutsuji are known as the Twelve Demon Moons. They represent his personal slaves and the 12 most potent Demons he controls.

Each Demon’s strength is represented by a number inscribed in their eyes. The greatest moon is Upper Moon One, while Lower Moon Six holds the lowest rank in the anime. There is a huge disparity in power between the two parties, and the Upper Moons despise the Lower Moons.

Missions of the 12 demon moon

1. Finding and capturing the Blue Spider Lily. This is a crucial component of an experimental treatment created in the Heian era by a brilliant physician. Muzan Kibutsuji’s transformation into a demon was caused by a prototype of this treatment.

2. Destroy the Ubuyashiki base of operations and kill all hashira. Both the Ubuyashiki and Muzan’s family head the demon slayer corps which is a key issue for all his plans.

3. Finding Nezuko, and making muzan live in the sun. Muzan Kibutsuji is infatuated with Nezuko and wants to assimilate her so that he can also wander in the sun after learning that she is resistant to the Demon’s worst afflictions and can comfortably stroll in the sunshine.

Muzan Kibutsuji would slit the Demon’s eyeballs to disqualify them if they are expelled from the Twelve Demon Moons, robbing them of the position they were awarded. One such Demon is Kyogai, who had consumed all the humanity he could in order to become stronger, but had exhausted his limit. He was thus expelled from the Twelve Demon Moons, which was still visible through the ‘X’ scar on his eye.

The Upper Moons have murdered and consumed a lot of Pillars throughout the years, despite the fact that the Pillars from the Demon Slayer Corps have killed and eaten a lot of Lower Moons over the generations. Over a thousand attempts have reportedly failed to kill an Upper Moon since the murder of Gyutaro and Daki.

The 12 moons are listed below, going from the top to the lowest  demon moons. These would be the demon slayer’s foes; while a few of the 12 kizuki have already appeared on the show, the most have yet to do so. So beware of spoiler alerts in this article.

Kokushibou, the right hand moon of the master Muzan, is the most potent/strongest of the 12 kizuki in the demon slayer manga and anime. He provided Muzan with unwavering commitment and integrity throughout. He employs moon breathing technique as a demon, which is one of the things that makes him so fearsome.

For details, please read: Upper Moon 1: The Story Of Kokushibo (Powers And Abilities)

Doma is the second-most deadly and cruel of the 12 demon moons. By using only his kyosensu, the demon can create ice (Japanese folding fans). In the same way that Nezuko could create fire using his blood, Doma could also create frost with his body and blood.

When Akaza fought Kyojuro Rengoko, it was clear that he was the third-most potent demon. He has enhanced perception thanks to his blood art, which exploits violent death to send shockwaves. Among all the 12 kizukis, he can regenerate the quickest.

Hantengu, the initial filler of the upper moon 4 level kizuki, was changed to Nakime. Nakime’s physical prowess was not displayed, but with only one stroke of her biwa, she was able to control the fortress. She initially made her appearance when Muzan massacred the lower moon demons.

Of the 12 demon moons, Gyokko exhibits the most narcissistic traits. The devil is preoccupied with creativity and gets enraged that people don’t respect his self-styled artwork. Gyokko has the ability to summon fish demons in pots to battle his foes.

For details, please read: The Story Of Upper Moon 5 [Gyokko] In Demon Slayer

Kaigaku is one of the main antagonists of the entertainment district arc. He was originally trained by former thunder hashira Jigoro Kuwajima. As a human, Kaigaku showed qualities of an arrogant opportunist who follows the strong and does anything to survive.

Following Muzan’s killing of the lower moon demons, Enmu was the solitary survivor of the Mugen Train Arc. As seen in the narrative, Enmu’s favorite attack is entering people’s dreams and ruin their spiritual foundation. He also puts individuals to sleep on demand by controlling their dreams with his blood demon art.

Rokuro joined the 12 kizuki in the anime just after the original lower moon 2—Hairo—was eliminated. The demon could also use his blood to change the shape of these shadows into other shapes.

Among the lesser moon demons, Wakuraba was the most dependable. He can be shown to have increased speed.  When he attempted to flee from Muzan after witnessing his fellow lower moon demons being slaughtered, his increased speed was evident. Wakuraba is quickly taken prisoner and executed by Muzan, but to no avail.

One more demon slayer about whom not much is known. What Mukago’s personality has to give was never made available to the public. The demon was slain by Muzan in the Mugen train arc together with other lower moon monsters. Mukago had horns sticking from her forehead and was small in stature.

Out of the 12,, Rui seems to be the only lower moon that has had a complete episode’s worth of screen time. He used his blood to transform other demons into him and was obsessed with having children.

Rui can manipulate cells to alter the outward appearance of demons that have ingested his blood. The giant spider web, which is as powerful as a nichirin blade, serves as his main defense in the meanwhile.

The Kyogai blood demon artwork resembled Nakime’s in certain ways. Kyogai’s body included several drums that, when touched, changed his environment. Kamanue later took up the post after Kyogai. Little is documented about Kamanue, other than the fact that Muzan devoured the wretched demon as soon as he heard its thoughts.

For details, please read: Who Are The Lower Moon 6 In Demon Slayer | 12 Demon Moons

Therefore, in the demon slayer narrative, these are the fiercest demons. Every one of those demons also has a distinct combat style and a blood demon art that is all unique. Manga enthusiasts are already familiar with these villains and their powers, but anime fans are not aware of the 12 kizuki.

Meanwhile, the higher-ranking kizuki are certain to make an appearance in the next demon slayer arcs.

Hopefully you enjoyed reading just as much as we did while compiling this piece for you. Pardon the spoilers and comment below with your thoughts. Who is your favorite demon moon, and why?